Super Time Force Ultra is a potluck of game design — 2D shooter, puzzle, co-op and time rewinding yet it’s most unique mechanic is managing to make a singleplayer- multiplayer game wrapped up in an old school aesthetic.

Me, Myself and I:

The story is that you in the present of 198X have invented time travel just as robots take over the world and it’s up to you from the future and your elite team of commandos to save the past, present and future from destruction.

Each level has a 60 second time limit as you must get through it while fighting and not dying from one hit. But the twist is that you have “time-outs” or the ability to rewind time as far back as restarting the level. This in turn will revive any enemies you killed but your past selves will remain and go through the level just as you did.

If one of your past selves happened to die, you can try to prevent your past death and score a power-up in the process. Each time you use a time-out, the number of you grows to the point of insanity where you’ll have a level of an army of you playing co-op while not directly interacting with each other to take on the enemy menace. There are also special power ups that become visible after rewinding time which plays into game completion. 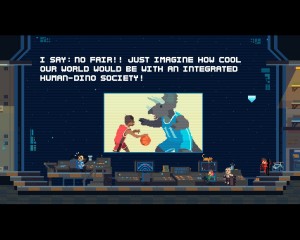 This is also where the puzzle aspect of Super Time Force Ultra comes in as you need to figure out how to shave off enough of your time to get through the stages while still having a great run to begin with and not running out of time-outs in the process.

Further adding to the challenge are puzzle stages that are available after the start. These stages force you to make use of time-out and your diverse line-up of characters to collect items that appear in multiple places.

Super Time Force Ultra also features a great story that makes fun of time traveling tropes as you muck around throughout history to save (??) time itself. Unfortunately for such a unique setup, the time traveling mechanics can become frustrating.

Getting through each level perfectly requires precise use of the time-out feature but despite the game’s mechanic of repeat until success; you’ll still find situations that can only work one time.

One of the game’s many situations is having an item fly out of a destroyed enemy or object and you need to catch it before it hits the ground. What you need to do is rewind time and move your current self into position before your past self sets it loose. The problem is if you are too quick and set up a situation where your past self destroys it too quickly, there is no way for any of your future selves to get there. I would have liked some way to delete past selves to truly get a redo when I was going for a perfect run. 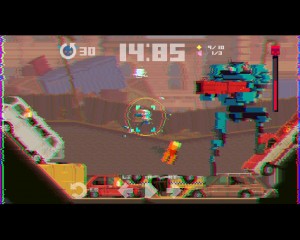 The main issue is that the time-out mechanic while interesting, wasn’t enough to carry me through the entire game and the developers were riding on the fact that each character has different abilities.

But with every level built around the same mechanic, it got too repetitive for me despite the great boss fights and unusual story.

Super Time Force Ultra is one of those games that’s great for an extended afternoon of play but unfortunately lacks the depth to make it a title that you’ll keep coming back to unless you are going for 100% completion.