When it comes to First Person Shooters, I prefer those of the non military kind, where it’s not so much about chest covered wall and more about monsters and special abilities. The Darkness 1 and 2, based on the comic book of the same name delivered on that front.

While creating a game off of another property is a challenge in of itself. What is more interesting is how two games in the same series, differed so much based on the design philosophies of the two studios that made them.

Creeping Through The Shadows:

The following post contains spoilers for both The Darkness 1 and 2. You’ve been warned.

The first Darkness came out in 2007 and was done by Starbreeze Studios. Starbreeze is most likely known for the development of The Chronicles of Riddick: Escape From Butcher Bay. The game was a first person shooter that combined stealth, hand to hand fighting, gun play, exploration and an engaging story together. It also managed to be a more successful platform for the Riddick brand then the movie that came out at the same time.

Riddick really showcased Starbreeze’s talents for not only having great gameplay, but building the world around the player. Exploring the different areas of Butcher Bay and interacting with the people was a major point of the title. It was this kind of attention to detail that Starbreeze brought over for The Darkness.

In the game, players control Jackie Estacado, a low level gangster working for the New York Mafia. On his 21th birthday Jackie discovers that he is the next vessel for a creature called “the darkness” that grants him demonic powers. These powers came in handy when his uncle who runs the Mob decides to have him killed.

The Darkness was played in first person, as Jackie could use guns or his various powers to deal with any threat. The dynamic of having the darkness was that Jackie was more powerful standing in shadows, and weaker in light. This required the player to shoot out any light sources and retreat to the shadows to heal. 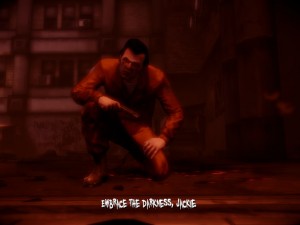 The theme of being tormented by the darkness is constant throughout both games.

As the game went on, the player would unlock other abilities that would play into puzzle solving and combat. For example, summoning a tentacle that could extend out to kill enemies or knock out lights.

Besides these one off powers, the player could summon minions called Darklings that each had a specific purpose.

The level design and progression stood out from other shooters thanks to Starbreeze’s influence. Instead of each level existing in a vacuum, the player could explore the streets of New York and take the subway to the different areas. There were a lot of collectibles and side quests for the player to find, and this helped give the world some flavor.

The Darkness moved at a slower paced compared to other FPS titles. This allowed the story and the characters to stand out more. The best example of this and one of the most heartwarming moments I’ve seen in any video game came early in the title.

Before going out for a mission, Jackie visited his girlfriend’s apartment. Where if the player feels inclined, they can put aside the mission and watch To Kill a Mockingbird with her. Now this wasn’t a cut scene or time lapse, but the actual full length movie. During which they sit together and just relax in each other’s arms.

“One of the problems in shooters where the player has a wide variety of special powers is providing adequate challenges.”

This scene became all the more touching with what happens to her a few missions later. Where she is killed by Jackie’s uncle and he is powerless to stop him, due to the Darkness holding him back.

While The Darkness had great moments like that, the rest of the time wasn’t as poignant. The side quests from earlier required the player to backtrack through the city, dealing with 30 to 40 second load times each time.

The gunplay wasn’t that satisfying in my opinion, as you mainly fought random mafia goons and some darkness monsters. But you always outgunned the enemies thanks to your dual weapons and darkness powers.

The powers themselves, while useful for puzzle solving did feel a little bloated by the half way point. As you accumulated multiple powers, darklings and even a darkness gun that began to overwhelm the player. Now having all these options would have been good, if there were multiple ways of proceeding through the levels.

Instead, the game was very linear and every firefight went the same way. Enemies were of your usual charge at you design and were all just fodder for the player. The boss fights required a little more thought to deal with them, but nothing too complex.

The whole idea of exploring New York for side quests and collectibles was good, expect for technical issues. As mentioned earlier, each area had 30 to 40 second loading screens. Similar to the game Splatterhouse for the 360, these extended loading times just kill the pacing of the game and make it hard to keep exploring.

Average reviews of The Darkness led to the sequel being given to a new developer and while it wasn’t as innovative, the new developers definitely ran with it.

Bloodbaths in the Dark:

The Darkness 2 developed by Digital Extremes, was a much leaner experience. No more city exploration, heavy storyline, or huge arsenal of powers, but what was left was more cohesive compared to the first game.

Jackie’s darkness powers have been toned down to a melee attack, interacting with one darkling, a gun power up skill, and a black hole and insect swarm attack for dealing with crowds of enemies. There are no more puzzles or stealth sections, but just straight up action and boss fights. 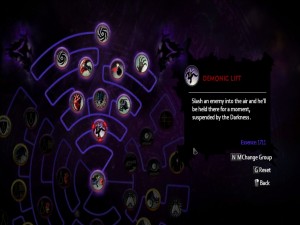 The multiple skill trees gave the player more freedom in defining their tactics in The Darkness 2.

Improving Jackie is done from darkness hubs scattered around each level. The player earns points for killing enemies with different weapons and tactics which can be put into three different skill trees.

Where The Darkness 2 excels over the first game and other shooters in general, was with the gunfights.

One of the problems in shooters where the player has a wide variety of special powers is providing adequate challenges. Most shooters either swarm the player with basic enemies, or have enemies that are supposed to be stronger but play by different rules then the player, such as the Big Daddies from Bioshock.

But here, the plot has the player fighting against a group that has been studying the darkness for years and have developed ways to fight it. As in the first game, the player is weakened when standing in light and the enemies this time around know it. Some enemies throw flares at the player or use hand held spotlights to blind and weaken them.

Later enemies will even use some of the darkness powers including armor, or a tentacle to pull the weapons out of the player’s hands. These enemies force the player out of their comfort zone as the superior force on the field, and require them to adapt to the enemy tactics.

But where The Darkness 2 really impresses is with the online co-op mode. The co-op campaign runs parallel to the main story, featuring a group of assassins who each use a different darkness power. Each one had a different weapon and skill trees that can be upgraded. This type of asymmetrical co-op design is one of my favorites as it really makes the group greater than the sum of its parts.

How They Stacked Up:

Overall I found my opinion more favorable towards the The Darkness 2 then the first. While the first one had the better story, the gameplay was more refined in the sequel. In my opinion it felt like Starbreeze was reaching further out with their version of The Darkness and didn’t quite make it. While Digital Extremes on the other hand, went for something not as complex, but nailed more of the elements. 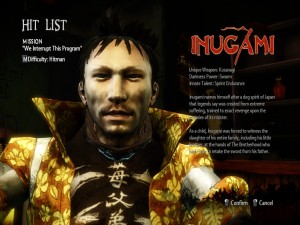 One of the four playable characters for the co-op mode. Featuring his own back story and unique abilities.

It seems that my opinion is in the minority as on Metacritic the first Darkness has an average of 82, while the sequel is at 77. I’m really saddened by the fact that the co-op mode didn’t stick out among gamers, as it elevated the gameplay.

Creating an asymmetrical co-op experience is tricky and I would have liked to have seen it fleshed out either in a new game, or with DLC.

Currently there are no plans to continue to series, which makes the cliff hanger ending of the second one all the more annoying. But who know at this point, maybe a third developer will step in and continue the trend of changing the gameplay.

Fan Choice: The Impact of Greenlight and Kickstarter