Croteam has certainty come a long way since opening their doors in 1993. They are most famously known as the developers behind the Serious Sam series and the Serious Engine used to run it. For a studio known for making balls to the wall shooters, The Talos Principle is as far out of left field as you can get with a thought and spiritually provoking puzzle game that if I would have played it sooner, would have easily made my top ten of 2014 list.

The Talos Principle begins with you as some sort of cyborg waking up in the middle of a garden with a giant voice speaking to you. The voice tells you that it’s Elohim, the Hebrew noun for God or Gods and welcomes you to its world. The world is full of puzzles which Elohim tasks you to explore and solve to your heart’s content with the only warning being not to explore a giant tower.

What follows is a minimalist puzzle adventure as you explore Elohim’s world separated into three temples built around different rooms. Each room it essentially an island where the player can find logs from a mysterious person and a computer with a helper to interact with and more importantly the puzzles.

The puzzles are based around a single solution to them with the object is to use what’s available to reach the Tetromino piece or relic placed at the end of the puzzle.  The relics are used as keys to unlock new areas and items that will be used for future puzzles. As with any puzzle game, the complexity and skill needed to solve them grows as you continue onward, but there are always multiple puzzles open that you can attempt if you get stuck on one. 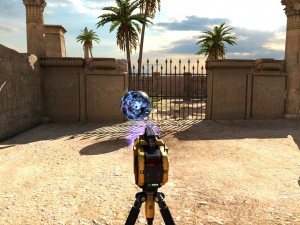 The various items require you to figure out their use and then exploit that in creative ways.

Beyond the relics, each area has stars hidden that require a different thought process to get to.

Some of them are hidden in plain sight, while others may require you to use the objects in the puzzle areas in a different manner.

The game reminds me a lot of The Swapper in both layout and minimalist storytelling which is not by coincidence as the writer for it worked with Croteam.

I Sing the Body Electric:

The Talos Principle’s story is all told through the logs and interactions you have in the world. This is one of those parts that I can’t talk too much about as part of the charm is discovering things for yourself. The game has multiple endings based on your choices with one of the major story points having to deal with the philosophical debate of what is a human or more specifically what does it mean to be alive?

The game’s empty environments and sweeping music gives the world a mysterious feeling to it as you dig deeper into what’s really going on. What’s interesting about The Talos Principle is like The Sweeper this is a game that doesn’t hold your hand or really push you to explore its mysteries. For people wanting to play through to one of the endings, it’s only a matter of getting the relics needed and pushing through.

However for the people who want to see more, there is a lot to explore within each temple. The various logs paint a picture of what happened to the world and the extra puzzles and star challenges are going to push your critical thinking skills to their limits. 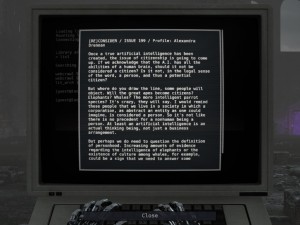 The story remains mysterious throughout but never really takes center stage and require the player to explore to discover it.

One thing that I really like about The Talos Principle compared to The Swapper is that the addition of new items to the puzzle routines gave Croteam the luxury of continuing to add new puzzle types and expand the difficulty curve.

In the Swapper, the mechanics were limited to the swapper device and just finding more and more difficult ways to use it.

Here, it’s possible to return to a puzzle with the added knowledge of using the item in a different solution and method to solve it. The developers were smart in opening up most of the world from the start. By doing that, you’re never without something else to do and while it’s easy to get stuck on a tricky puzzle, you won’t be forced to solve it to make progress.

And with all that said, it’s time to talk about the tricky part of critiquing The Talos Principle — Are there any problems with it?

Like The Swapper, trying to find anything wrong with The Talos Principle is tough due to the nature of the puzzle design. As with any puzzle game what I find easy to solve, you may find very difficult and vice versa.

But I do have a few nitpicks about the game that I can bring up. First is that the UI can become distracting as once you find a relic needed for a door or item unlock, the indicator remains flashing at the top of the screen until you return back and use them. I also would have liked an easier way to make note of the star locations once you’ve found them hidden on a level. The problem is that the environments all look the same within each temple and it makes it hard to remember where stars are located. 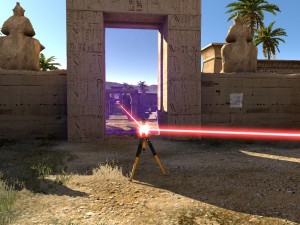 Finding the stars hidden in each area is all about taking what you know and turning it on its head.

As with The Swapper, the designers leave figuring out the nuances of the various items to you and there are no tutorials, hints or even a basic description to be found.

Again this goes back to the exploration and open world of The Talos Principle, but it can be frustrating to be stuck on a puzzle because there is one aspect of the item that you don’t know about.

This is why it’s better to move on from puzzles that you are stuck on rather than beating your head against the wall as the item may be used differently in another puzzle that will allow you to figure out its purpose in the one that you’re stuck on.

One last point is that some of the later puzzles rely on very tight item placement or quick movement by the player and it can sometimes be tricky to figure out if you have the right solution or if something is off in your actions.

The Talos Principle is a game that I wished that I would have played last year in time for my 2014 best of list as it would have easily made the top 3. Just like the Swapper, we have a game that makes you think, both as a form of gameplay and about the story that it’s telling. For people looking for a puzzle game that they can get lost in for hours, The Talos Principle is a perfect fit.