Titan Souls was one of those games that was hyped pretty hard prior to release: Originally conceived as a Game Jam game that grew into a publishing deal and full title. The game has that Indie charm we’ve come to expect: Streamlined and straight forward gameplay, strong pixel aesthetic and a supposed grand mystery to explore. But while Titan Souls tries to be as big as its name implies, the game ends up actually being less.

One Shot, One Kill:

Titan Souls has been described by people as Shadow of the Colossus meets Dark Souls, but personally this reminds me of the old Punch Out! games with the focus of boss fights over everything else. In Titan Souls you’re on a mysterious quest which takes you across a strange land hunting down Titans.

Armed only with a bow and one arrow, you need to figure out the pattern of each boss and get a shot to connect with its weak spot.  Since you only have one arrow, once it’s been used you can summon it back towards you while remaining stationary; which actually becomes a strategy for some of the boss fights.

Each boss is completely unique from one another, but the rules of engagement remain the same throughout. Adding to the challenge is that you only have one life and any contact with the boss or its attacks will kill you. This sets Titan Souls up as a high stakes game of who can tag the other first with the added pressure of your one arrow.

While the game sounds very similar to the amazing Shadow of the Colossus, Titan Souls slips up with trying to make more out of less.

Titan Souls despite the hard difficulty is not a complex game no matter what the developers tried to do. Half of each boss fight is figuring out their pattern, while the other half is actually getting into a position where you can finish it off. This in turn makes the bosses very uneven: There will be fights that you will be stuck in for minutes and others where you’ll literally win within 10 seconds.

The world and the setting are just lacking compared to Shadow of the Colossus, where you had that real sense of place and mystery to explore. Titan Souls’ map is big but mostly barren outside of the boss fights. Where in Shadow, there were hidden easter eggs to find and the basic upgrades to your grip meter.

All in all, that was a world where I felt like exploring and was rewarded for, Titan Souls not so much. The developers made that critical mistake of confusing lack of story or exposition, to mean that the game has hidden depth. That only works when the game is telling the player something, either through cut scenes or passively with the main character. You can get a lot out of little details, such as in ICO or Shadow of the Colossus. 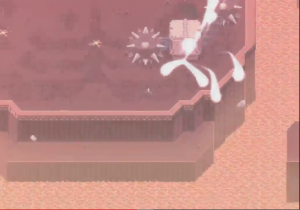 Boss battles are less about skill, and more about getting the planets to align for that one perfect shot

Getting back to the bosses, due to the lack of any real world or character building, there just isn’t a connection you get from fighting them.

The Colossi of Shadow each had a personality and there was this great build up of exploring the world, finding it, getting into the fight and then finally striking the fatal blow. In Titan Souls, the bosses are simply obstacles for you to get around and when they’re dead, that’s it.

Again, I never felt like I was being challenged by these fights, but more about jumping through their hoops until the time was right. With all this combined, Titan Souls was very short and I actually beat the main game in under an hour and a half, which is not good considering the $15 price tag (or $9 if you got it on sale.)

There is a hard mode that speeds up the boss attacks along with a one life and no roll mode to extend the game. But after beating the main game, I really didn’t have the desire to hunt around the world and fight the few remaining titans I had left.

I can sum up Titan Souls very easily with the following statement: The game tries to be greater than the sum of its parts, but simply doesn’t succeed. There’s just nothing compelling about this world or the gameplay and sometimes a minimalist game really is just simple. When your game is about a singular experience or mechanic, you either need to build an amazing wrapper of aesthetics or story around it, or figure out all the interesting ways to make use of that mechanic.

Titan Souls doesn’t do either and ends up as a game that’s over almost as fast as its boss fights. To catch my spotlight/almost entire play through, you can find it on YouTube.