Tormentor X Punisher follows in the line of score chasing-focused titles like Devil Daggers. While the game is built around essentially one play, the subtle differences do a lot to distinguish it from its ilk.

After the game’s crazy (and not for kids) opening scene, all you need to know is that you’re pissed, there are demons nearby, go kill them. The rules of Tormentor X Punisher are simple: Everything dies in one hit. You’re armed with a shotgun/assault rifle combo. Using your rifle is meant for long ranged combat, and the final bullet will leave a fire trail. Your shotgun will automatically refill your machine gun as you fire it; making sure that combat is always going on.

The twist of the game comes in with how your shotgun will grow over time. Killing enemies in specific ways will bring up a perk represented by a radial pie. Fill the circle up, and your shotgun will gain a permanent bonus for the remainder of the run. Enemies are always constantly spawning, which should give you plenty of chances to go for special kills.

While the perks do impact how you play Tormentor X Punisher, it’s the bosses that come to define the run.

The bosses in Tormentor X Punisher are the defining moments in each run. After about a minute of play, a boss will randomly spawn into the middle of the arena. While they also have one hit point, striking their weakpoint without getting killed is another matter. 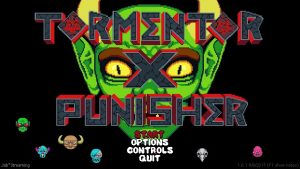 This game is definitely not for the kids

What’s special about the bosses is that each one will impact the arena in some way upon death. One boss throws slabs of rocks that become permanent walls.

Another boss will leave buzz saws going around the perimeter for the remainder of the run. While there is a fixed limit of bosses currently in the game, the order that you fight them in will have drastic implications on the arena.

Get the buzz saw boss first, and you can expect a very different run compared to something that just spawns acid on the ground. The beauty of the bosses and perk system is that they help to fight one of the big problems with score chasers: Repetition.

Games like Devil Daggers or Geometry Wars always start the same way, and how you play will determine how far you get. With Tormentor X Punisher, you can’t guarantee that the arena will be the same after each minute of play.

However, Tormentor X Punisher can’t escape the same problems that I have with the score chasing genre.

Tormentor X Punisher was designed around quick repeatable runs. If you’re looking for elements of persistence or growth, there aren’t any. Outside of learning how to make use of the perks, there are no elements that really change the game on repeated plays. Tormentor X Punisher knows what kind of game it wants to be, and if you’re not into score chasing, there’s nothing here for you.

For more on the game, you can watch my (profanity-filled) spotlight of the game on the Game-Wisdom YouTube channel