Supergiant Games made waves in a huge way with the release of Bastion in 2011 — featuring an excellent combination of design, sound and art to create one of the best games of the year. Since then, they have been hard at work on their title Transistor and while it may look similar in style, things couldn’t be further apart in more ways than one.

Transistor begins much like Bastion in that the player is thrown into a strange world and situation this time with the character Red. We find her standing over the body of a friend with a talking sword sticking out of his chest and she is unable to talk. All we know is that some group attacked the duo and Red is now out for revenge.

Transistor continues Supergiant’s style of having amazing art and music and this is one of those games where the music perfectly fits to the tone of the game. The art style is reminiscent of Bastion but the darker hues of the cityscape are a stark contrast to the bright world of the Bastion.

But where Transistor really steps into new territory would be the gameplay. Fans of Bastion may remember that combat was completely real time with the player deciding on a melee, ranged and special attacks to use. Transistor looks real time but there is a more tactical turn based element to the game.

During combat you’ll have at most four functions (AKA abilities) that you can make use of. You can attack normally much like in Bastion; however the enemies are a lot more reactive and can attack you without much trouble. To combat that, you can stop time and set up an attack plan.

With time paused, you can move around, select functions and create combos as long as you have enough meter seen at the top of the screen. Attacking this way also makes your functions do more damage as they can cause increased combo damage. The catch is that once your “turn” is over, you will not be able to use any functions (with some exceptions) until the meter fills up again. 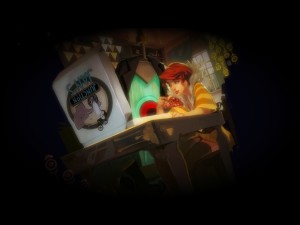 Transistor’s art style and music were amazing and one of the best I’ve seen this year.

This is very important as death during combat serves up an interesting penalty. Every time you die, one of your functions that you are using becomes unavailable until you’ve reached a predetermined number of new access points. Lose all your equipped functions in a single fight and you’re dead.

What’s interesting is how every function you unlock has three different purposes that you can use it for. You can either equip it directly into one of your four function slots to be used during combat. Functions can be attached to other functions providing a unique benefit and they can be attached to you directly giving yourself a unique perk. This was a great idea and it allows you to mix and match however you want and gives every function a purpose.

Keeping with Bastion’s variable difficulty, you’ll eventually unlock limitators that will make the game harder in various ways for you with the reward being more experience after each battle. And just like Bastion, I like how Supergiant didn’t just make things harder by upping enemy stats but by introducing new challenges that all together make the game a different experience.

Transistor is an interesting game backed up with amazing music and art design. However I’m not as enthralled with it as I was with Bastion and this is due to the systems not meshing as well.

Transistor tries to be several things and make use of multiple forms of game design: It walks the line between action and RPG while presenting both real time and turn based combat.

The problem is that when you start combining polarizing design systems, it’s almost impossible to balance everything perfectly and something always gets left in the dust. With Transistor it’s the real time combat and how the game seems to be designed around the turn based system instead. 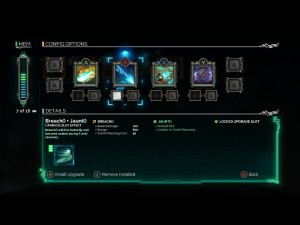 The function management system was well defined and the best part of Transistor’s gameplay in my opinion.

Enemies are fast, can track you very easily and your slow movement and lack of non function based defenses means that you’re an easy target.

With the turn based mode, one annoyance I had with it was that I was having cases where inaccurate information was costing me turns. For example: Let’s say I use a function that pushes an enemy away and during the turn phase, I perform that attack then follow it up with a short range and area of effect attack. What ended up happening was that the first attack pushes the enemy just enough out of range that the enemy doesn’t get hit by my follow up attacks even though the game said it would.

As you get further into the game and start to fight the bosses, the clash between real and turn based mode becomes more apparent. During a fight with a giant creature, I found that staying in real time I was too slow to dodge his attacks or get hits in while turn based left me defenseless to the just mentioned attacks. 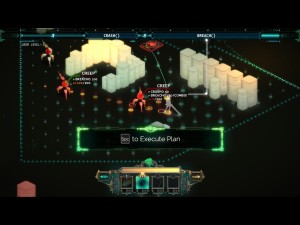 The turn based form of combat becomes required to stand a chance against the waves of enemies and the lack of a deep real time combat system.

It felt like everything that I tried to do in Transistor, the design was fighting me on to the point of frustration. The various functions are too slow and limited for real time combat and the turn based mode lacks any real tactical depth to it.

The penalty system sounds great on paper but doesn’t really work when you’re dealing with a linear game. Because every encounter is set, failing miserably at one fight can leave you screwed for the next one as all the access points are predefined.

Case in point, during the as mentioned boss fight, after it got enough lucky shots in, I lost my sole defense function I had equipped. With no way to dodge attacks during combat it was an easy matter for it to finish me off three more times.

Transistor tries to be many things and this feels like a case where the kitchen sink approach doesn’t work for me. I’d rather have the game be either real time or turn based, not a mixture of both. This would allow either system to shine instead of being shackled to the other. And combined with the linear path through the game leaves you with game mechanics that I think would have done better in a different, less linear title. And because of that, Transistor is a game that I love to look at and listen to but not too thrilled on playing.

THOUGHTS ON
“Transistor: Not so Soulful”