Warhammer Vermintide was developer Fatshark’s attempt at entering the co-op market alongside hits like Left 4 Dead and Payday. Separating from the gun-focused entries, Vermintide took place in the dark fantasy universe of Warhammer with an emphasis on melee combat.

While the basic idea worked, the game’s confusing persistence system and random progression made it frustrating. With a new engine and design philosophy, Warhammer Vermintide 2 is a successful course correction and a great game for friends who like to slay together.

I’m not versed in Warhammer lore, so the story bits escape me. Taking place after the end of the first game, the species of rat creatures known as the Skaven have launched another attack on the land, and it’s up to the unlikely five heroes of the last game to once again save the day.

The easiest way to describe Vermintide 2’s gameplay is really just Left 4 Dead, but with a focus on melee. Each level requires you and your team to complete different tasks while dealing with the variety of enemies. You will be fighting all manner of rat-based enemies, and new barbarians that have joined forces with them.

The game features special enemies such as the Gatling Rat and Chaos Knight that are Vermintide’s versions of the “special infected.” While levels are populated by enemies, the AI director will summon hordes that will force your team to hold the line. Surviving will require your team to work together, as it’s impossible for one player to get through alone.

With Vermintide 2, the developers have improved the persistent system of growing more powerful by completing missions and hunting for loot.

Unlike the first game, there is now a small RPG layer to leveling up and character choices. You still can only play as one of the five heroes, but they each come in three varieties. Unlocked as you level up, the different varieties are designed around different play styles. In return, it allows parties of different make ups to adjust and offers a bit more diversity in play. Every five levels, you’ll unlock talent options that provide passive buffs to the respective hero as well.

As with the first game, gear progression is tied to both difficulty and loot boxes (note: there are no in-game purchases of loot boxes).

How it works is you receive a box after completing a mission. The quality of the box is determined based on the difficulty and any bonus factors you achieved. In the first game, the problem was that the boxes could spawn anything; even items for classes you weren’t playing as.

In Vermintide 2, whatever class you were playing as will have the loot box tailored to them. This is an important change and helps to rein in the RNG of progress in the previous game.

Another welcome change in the game is the new Hero Score rating. Hero Score is Vermintide 2’s take on “gear rating,” and measures how effective your character is based on the gear they’re using and their level. This is a major part of progressing and matchmaking, because you can only access higher difficulties once you’ve achieved a certain Hero Score.

Not only is this easier to understand, but it makes sure that new players will only be able to play the difficulties that they’re able to handle. As with the first game, the structure of playing Vermintide is that you will be repeating the same maps in the three act campaign (for now), but you’ll keep going up in difficulty to unlock better gear. 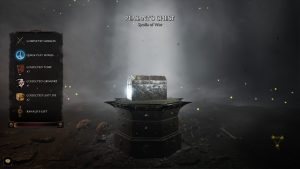 Getting the best chance for quality loot will take some doing

A subtle design brilliance with the game is that your hero power dictates your damage output, not the weapon itself. That means you are not held back by not finding an upgraded weapon as long as your hero power meets the condition for the play.

While these changes aren’t that major in terms of design, they greatly improve playing Vermintide 2 and making sure that the player is always progressing. If you liked Vermintide, there is more to love here, and the only design complaint left is the same one from the first game.

The issue is the game’s longevity. There are only a handful of maps, and you’re going to be repeating them on each of the game’s difficulties. You’re not really changing how you play through each map, but just raising the threat level of the enemy.

One suggestion would be to add new types of enemies like they did in Payday 2 to mix up replaying the game on the harder settings. With that said, if you want to succeed at the higher difficulties, you really do need a competent team to have a chance at surviving. There are plans to add in new levels via patches and DLC to the game, but it does leave the game on the short end at launch.

I’m also not a fan of the tome/hidden item system. The bonus items needed to upgrade your mission clear loot chest are in fixed locations on each map. The problem is that it downplays the need to explore and punishes new players who don’t know where they are. And trust me, watching friends locate some of these books, I was never going to find them due to how out of the way they are. 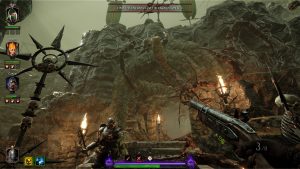 the new engine really pops; even on the low settings

There is a way to modify the difficulty via deeds, where players can make the maps harder to increase rewards, but it is downplayed at the moment.

Warhammer Vermintide 2 is an example of a great sequel; it keeps the good while removing most of the bad of the original. Unless you completely hated the first game, you’ll find a great time for you and your friends with this one.

THOUGHTS ON
“Warhammer Vermintide 2 is a Bloody Success”