The Warlock of Firetop Mountain Review: Jumping off the Page

RPGs have always had a foundation in the table-top genre. Table-top options like adventure books and Dungeons and Dragons helped to provide the architecture for games like Baldur’s Gate and more. Tin Man Games have been re-releasing classic adventure books for modern audiences over the years, but The Warlock of Firetop Mountain represents something new.

This is a game that is trying to capture the table-top and rogue-like/RPG audiences of today. Delivering something that may not hit each flavor perfectly, but is a great first step nonetheless.

The Warlock of Firetop Mountain is based on the adventure book from the early 80’s. The adventure book genre combined pen and paper RPG design with choose your own adventure narratives. What today’s game does is attempt to merge old and new RPGs into something different.

At the start of the game, you’ll choose your hero from a set of figurines. Each hero has different stats, personality traits, and attacks to use in combat. As you play the game and beat enemies, you’ll unlock souls which can buy new figurines. Each character has a different reason for going to the mountain; some are in it to save the day, others just want to find treasure and so on.

How the heroes interact with the area and the game plays out is what makes The Warlock of Firetop Mountain so unique.

Each playthrough takes place in a fixed location. To keep the game varied, your character will determine what you can and can’t do during a play. The hero’s personality traits will either help or hinder you at specific events, and their own personal quest will take you to different parts of the mountain. 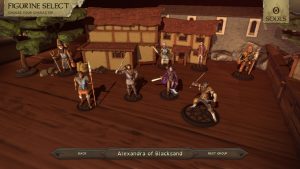 Despite having events that remain the same, previous actions and decisions may give you different options.

Your character’s luck and skill attributes will come into play to determine if you can get through different encounters. Combat is when the game adds in a tactical strategy layer to the proceedings.

Fighting enemies takes place on its own game board. Each turn, you can choose to move or use one of your character’s attacks. The combat system requires you to try and attack enemies based on where they are or where they’re going to move to. If you and the enemy attack each other at the same time during a turn, you’ll have to do a skill check to see whose attack gets through.

The enemies have different attack patterns and abilities based on their type. While it’s not the most complicated tactical system you’ll see, it does help to liven things up as you explore.

To give the player a chance in a world of death traps and dice rolls, the developers have a checkpoint system. There are rest benches throughout the mountain. You can use them to recover stamina and they will checkpoint your progress. Dying will reset all progress from after your last rest.

You only have three lives per play, and then you will have to restart from the beginning. Fortunately, you will keep all souls earned for unlocking new content. The developers hint at more stories, areas and figurines to come post launch.

All in all, The Warlock of Firetop Mountain does a good job of presenting a tabletop experience for fans and newcomers of the genre. You’re not going to find anything as complex as other PnP games, but it’s a satisfying RPG nonetheless. However, like most attempts at mixing designs, there are a few rough corners here and there.

The Warlock of Firetop Mountain attempts to combine the replayability of rogue-like design with a set number of situations of an adventure book. The fixed map greatly limits replayability no matter how many characters are added. 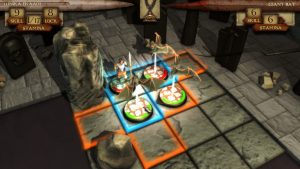 Eventually, you’ll know what the events are and how to best mitigate them. New content may come, but the game at the moment does start to feel like déjà vu after awhile. The Warlock of Firetop Mountain is not going to reach rogue-like levels of replayability.

From a UI standpoint, the only nitpick I have is about the combat system. The game uses a tell to let you know when something will attack that turn: The piece will shake. The problem is that it’s very easy to miss it sometimes if you’re not paying close attention.

The End of the Book:

The Warlock of Firetop Mountain is an interesting take on bringing a fixed experience to modern audiences. We have a great foundation that could be used for other adventure books and settings.

If you’re looking to relive your days of adventure books, or just looking for a good RPG for all skill levels, The Warlock of Firetop Mountain is a great read/play.

For more on the game, you can check out my video first look:

First Look at The Warlock on Firetop Mountain

How to Power Players up With Upgrades