Wolfenstein the New Order: Reviving a Brand and FPS

The original Wolfenstein 3D is known as the game that not only heralded the dawn of FPS but also the game that put ID Software on the map. Since then, both ID Software and FPS game design has changed drastically. With Wolfenstein the New Order, studio Machine Games took the helm from ID to create a new game in the Wolfenstein universe.

While the warning signs of a new studio and reviving and old IP are here, Wolfenstein the New Order is a game that surprised me with how great it is.

Wolfenstein begins at the end of World War 2, where Nazi scientist Deathshead has helped the Nazis to within inches of winning the war. Leaving BJ Blazkowicz to take on one final mission to kill Deathshead and turn the tide. But things go wrong and BJ is left comatose until 1960 to awaken to a world where Nazi Germany won the war, the US was atom bombed into submission and everyone he ever knew is either dead or captured.

Despite the return to form of old school FPS design, the story is a major part of the game with quality voice acting and cut scenes as a break between the violence. The story and visual designs are quite good; featuring German covers of popular songs and what would happen if Nazism got a shot of sci-fi and 20 more years of terror.

Wolfenstein the New Order is very much an old school FPS game; with armor, ammo and health all over the place and the ability to hold an unrealistic amount of guns. A new twist on the formula comes in the form of being able to stealth through a lot of the levels.

The stealth detection is a little loose but it does allow you take on enemies and finish them without getting into a firefight. Players are also rewarded if they can stealth kill a commander as they will reveal all the secrets items on the map. Speaking of secrets, there are a lot to find; from Nazi gold to codes and even upgrades to help you out. The levels are interestingly designed; featuring multiple paths for the stealth sections while having some areas that are straight gun fights. 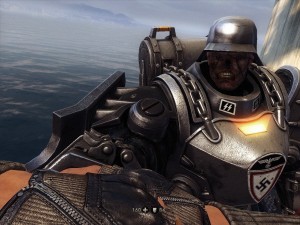 The actual gunplay is on the average side. While you will equip assault rifles, shotguns and futuristic type weapons, they all respond very arcade like without anything that really stood out to me.

Standing in your way are Nazis of all variety — Armored Dog Nazis, Robot Nazis and of course super solider Nazis.

Adding another element to the game, there is a basic perk system that is tied to the gameplay.

Wolfenstein the New Order may be about old school gameplay, but it does have some modern twists in the form of a perk system. The perks are categorized based on different playstyles like stealth, explosions and run and gun. Completing a task for a perk will unlock it for use and they range from simple ammo upgrades to being able to restore health and armor easier.

To the game’s credit, none of the perks could be considered required or punish the player for not getting them. They are simply mini rewards for players who want to try something different and it helps their playstyle, not become it. This is a good example of how to use a perk system or side system correctly as it does enough to reward the player that they will want to try to unlock them, but it’s not so powerful that the player has to rely on the perks as a crutch to get through the game. 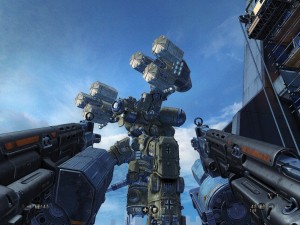 There are also side quests that take place at the resistance base that you call home after a few missions. Here, you’ll get a chance to talk to the various people and learn more about what’s going on while taking a break from combat.

Overall there isn’t anything that I would say is “bad” or “wrong” with Wolfenstein. But I do have some nitpicks here and there about the game.

Wolfenstein the New Order runs into a similar problem that Call of Juarez Gunslinger had. The background and enemies tend to use the same color palettes which in turn made it very easy to lose enemies in the background. There were a lot of times where I just couldn’t spot the enemy who was firing at me from a certain distance; even more so when fighting in darken environments.

This bleeding into the background also affects the items as it can be hard to spot health, armor, secrets and ammo lying about. Speaking of items, one bit of annoyance is that the game requires you to manually pick up all items and I would have preferred a “pick up all” option.

As I said further up, the gunplay is lacking as none of the weapons have a “pop” to them. There’s no real difference in terms of feel when it comes to firing a pistol vs. an assault rifle for instance. Even when you find futuristic weapons, they still handle the same as every other weapon.

Despite the variety of enemies, they all fall into the same pattern of “charge” without any other strategy. Fighting larger enemies is about the age old tactic of pumping them with rounds from your biggest guns without any greater strategy. This may be a callback to old school design, but that doesn’t make it exciting when you start fighting multiple large enemies. 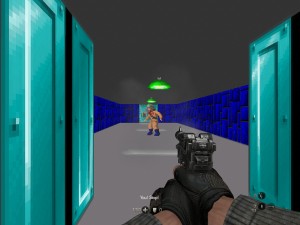 One last nitpick is that the game allows you to play under two different timelines based on who you save at the start of the game. I would have liked there to be more differences between the levels but it does mix up the cut scenes in interesting ways.

For once in a very long time, I’m genuinely surprised with the quality of a game.

What it does well isn’t standout or flashy, but features mechanics and systems designed to create a great experience and is a lesson on making a competent shooter.