You Must Build a Boat: Rock the Boat

10,000,000 was a surprise hit that made the jump from the mobile to PC market. Taking match 3 gameplay and adding in a RPG quest and progression system, helped elevate the game. Now the developers are back with the game You Must Build a Boat and while the seas are rough, the gameplay is just as addicting.

You Must Build a Boat follows the same basic gameplay as 10,000,000 with match 3 game design. During a run, you must match different color tiles in order to perform actions. Matching three in a row weapon icons will cause your character to attack with other colored icons having different uses.

At the top of the screen is the main character who is running to the right until he meets some kind of obstacle. Fighting monsters require you to match weapons, while chests require you to open them with key icons. If you’re not moving forward, your character will slowly be pushed back to the left side of the screen, or forced back when attacked. If the player gets knocked off screen, the run is over and the game will tally up everything you’ve earned.

Progression is tracked by completing quests, with each area having its own set of quests to achieve. Quests ranged from defeating enemies in specific ways, matching X kind of tiles and more, with the reward dependent on the quest. Complete all the quests in an area and you’ll be able to move onto the next until you’ve beaten the game. 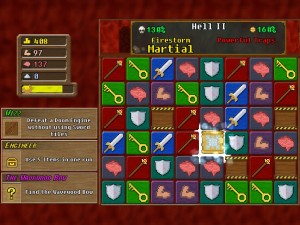 The game features a basic match 3 design, but has the benefit of the meta-game progression that affects how things play

What makes You Must Build a Boat so endearing is the constant RPG progression model built on top of the match three gameplay, which is an extension of 10,000,000.

Your boat steadily grows over the course of playing and so does your options before and after a run. As new crew members join, you’ll be able to upgrade your weapon icons, unlock passive bonuses and more. During a run, matching brain, gold and muscle icons will give you resources that can be spent on upgrades.

The upgrades progressively get more expensive and powerful to show a difference between the beginning, middle and end of the game.

This kind of RPG system is a great example of how a progression model can elevate a game, despite having simple gameplay. Every run no matter how long or short, will help you out with resources that will make things better for you. This is different than a game like Rogue Legacy where only the resources from your most recent run really matter.

There really isn’t a lot that I can say about You Must Build a Boat, and the reason is that there isn’t a lot here. Most people will be able to finish the game in a few hours and despite having a new game + mode, it doesn’t change how the game plays out; this also goes with the very low price tag. Ultimately, You Must Build a Boat is a short and sweet experience and is a great example that there is hidden depth in the match 3 genre.

For more on You Must Build a Boat, here is a spotlight that I did a few months ago.

Grim Dawn B26: Side Questing