5 Ways Gwent Differs from Other CCGs

Gwent is an interesting case in seeing how far a design will go. Originally a minigame in the Witcher 3, the popularity of it gave CD Project Red the motivation to turn it into its own full-fledged F2P game. Having not set out to design a CCG from the start, it presents us with one that is very different from the big names.

The first big difference is that fighting is not the main point of playing Gwent. Every unit you put on the field has a might rating that contributes to your total. Whoever has the most might at the end of the round wins (we’ll come back to that in a minute.) Only select cards can actually attack the other side; most often, cards are simply about board presence.

Because of this, it allowed CD Project Red to take a different approach to balancing. Cards with a high base might usually have no special effects; leaving smaller cards to define builds. Even if you have a strong board, that doesn’t mean much due to how a match plays out.

Gwent matches play over a series of 3 rounds with the first one to win twice wins the match. Both sides draw 10 cards at the start, 2 cards for round 2, and 1 card for round 3. With decks having a minimum of 25 cards, most likely you will not go through all 25 cards.

Rounds last until both players pass on their respective turns. You must play one card per turn or you will have to pass. When the round is over, all cards that don’t have the resilient trait (or special ability) will go to their respective graveyards. 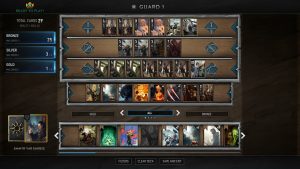 Deck building is focused more on synergies than tempo

This creates an interesting push and pull of knowing how much to commit to a single round. Having a strong first round doesn’t mean anything if you have nothing left for rounds two and three.

Likewise, trying to bait out a round three win doesn’t work if you can’t survive until that point.

The card design of Gwent is different from other games on the market. Cards are split between rarity and one of five possible factions at the moment (more on factions next.) As mentioned, you have a soft limit of 25 cards in a deck and a hard stop at 40. The rarities of the cards determine how many of each type you can have. With Bronze, you can have three copies and as many as you want up to the deck limit.

Silver cards are limited to one copy of a card, and you can only have a total of six in your deck. The same rules apply to gold cards with a limit of four. As with other CCGs, the rarer cards have special effects that will define your deck strategy. 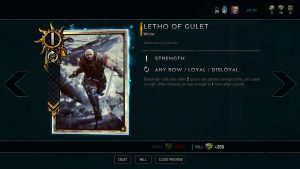 The different card tiers will define your deck

Besides resilience, you also need to pay attention to cards that put down weather effects and those that are immune to it. Weather will drop any non-resistant card down to one might until the weather has been cleared.

At the moment, there aren’t any rule destroying or altering cards in the same vein as hearthstone. However, players are figuring out all manner of advance combos and synergies between the gold, silver and bronze cards of their respective factions.

Each faction has cards unique to it along with potential strategies. The Monster faction is strong against weather effects and can also absorb cards for more might. Each faction has a twist that comes into play when going up against them.

One important role of the faction is determining what leader to use. Each faction has one of three leaders at the moment that you can assign to your deck. Players can use their leader powers once per match. As you get better at Gwent, the leader will come to define your strategy and deck. A good deck synergy ties the leader power to the golds and silvers in your deck.

One of the biggest elements of most ccgs is the concept of “Tempo.” Tempo is the principle of constantly having momentum with your cards and turns. A strong beginning hand will usually win out against a deck with better cards, but a lousy hand.

This creates a greater focus on luck at the start and a component of deck building. Anyone who has played Hearthstone will tell you that a deck of just high mana costing cards is doomed to fail. In my opinion, tempo creates too much of a dependency on luck, and that most matches are decided within drawing their hand.

Gwent is different in this regard. Because any card in hand can be played at any time, decks are about creating options and plays; not relying on tempo swings. Cards that allow you to draw more cards are rare and powerful in the game, due to the greater focus on card abilities. A friend once described Gwent as a game of chess where both sides pick their pieces beforehand.

Due to the flow of the game, there is a stronger cerebral element to playing Gwent. With each player able to play any card they want, there are mind games built around getting your opponent to use certain cards.

While it’s still in beta as we speak, I’m enjoying the differences in Gwent.

In Gwent, because there are three rounds to play, it’s more about playing the long-game than it is the short. The focus is less on tempo and more about countering your opponent and coming up with card synergies. I would say that in terms of card design, there is a tendency at the moment to focus on specific net decks.

With only three leaders per faction now, that does create a limitation on the kinds of decks you can build. It’s important to note that CD Project Red is still balancing the game and I’m sure will add in more cards as time goes on.

If you want to see the game in action, I have a growing playlist of my Nilfgaard Spy Deck over on the Game-Wisdom YouTube channel.

A Critical Thought on Subjective Difficulty in Game Design