There are some days where I feel that I’m the only one who is thinking critically about game design and iterating on it, and for today’s post, this is a topic that I seem to be alone in discussing. We’re talking about achievements, and how many developers can improve them in a simple way.

The Purpose of Achievements

The use of achievements became standardized for videogames with the release of the Xbox. Before that point, rewards in videogames were entirely intrinsic. What achievements did for game design was to provide a permanent reward for playing a game.

While it may seem vain to like achievements, they do help games when utilized right. They provide another motivation for players to go through a title. Some of the best-designed achievements will test players to do something unique or different that they wouldn’t think of. Recently, I did the Half Life 2 episode 1 achievement of getting through the game by only firing one bullet. From a communal standpoint, they allow friends to see how everyone is doing in a game and can be used for bragging rights.

Advanced examples of achievements involve tying in-game progress or rewards directly to them. Many MMOs have used an achievement system to reward players with minor buffs for completing specific tasks. We can also see developers tying progress to their achievements with the best example for my money being The Binding of Isaac.

Despite their popularity, and now almost universal usage, achievements have one flaw in their design.

The Flaw of Achievements

Achievement design for most games exists outside of the game itself. The reason for this is obvious — because achievement systems are tied to the platform’s profile or account feature, they’re not considered as part of the actual design of the game.

Many titles will not have a listing of their achievements in-game, but instead just link to the platform’s achievement page.

Truthfully, most developers aren’t thinking about how they’re designing their achievements and are instead focused on the gameplay, and that’s a fair attitude. But there is a better and more attractive way of thinking about achievements, and it’s something that many titles could do very easily.

Trophy room design is something that I’ve talked about in previous posts and in my first book on game design. The concept is that there is an in-game representation of your achievements. This is not the same as having content unlocked as in the Binding of Isaac or unlocking costumes or bonuses, but the achievement itself being represented in-game. Some MMOs or online games do allow players to display achievements on their profile, but that’s still not what we’re talking.

From a completionist standpoint, one of my favorite updates to Payday 2 was the enhanced safehouse. Your safehouse would grow and add in new things on display as you completed achievements. 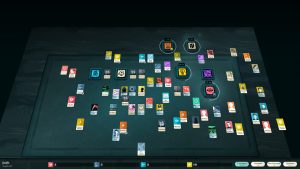 any game could be designed around a trophy room philosophy

The trophy room concept provides the player with an added incentive to play and hunt for achievements, as they can get a reward they can see while playing the game. For titles that feature an online aspect, other players can see each other’s trophies/achievements like in Payday 2.

In terms of added work, once again it all depends on the design and scope that the designer wants to work in. You could even just take character models and assets and shrink them down into trophy form. The allure of completing achievements for more trophies is similar to the thrill of completing a collection.

Perhaps the best reason to think of achievements as trophies is that the act of completing achievements is now a part of the gameplay loop and not just something extra. The player knows that the designers thought about their achievements to the point of giving them an in-game reward for going after them; as opposed to just throwing in random achievements.

Despite how quickly achievements came to dominating videogames, the concept itself has remained stagnant with rare exception. Just about every game I’ve played these days, I could think of ways for developers to implement trophy room design.

For you reading this — What do you think about the idea, and can you think of other areas for achievements to go?

Indie Game Spotlight Recap for May 2019