Yesterday I joked about the Oculus Rift now being owned by Facebook means the end of the world. But looking around some forums, the Oculus Rift may not be the only thing that has had its consumer confidence shaken. We’ve been talking about for months if kickstarter and crowdfunding will remain viable in the future, but could this be the death blow for bigger projects?

The Power (and Money) Of the People:

While kickstarter has been around for a few years now, we all know that it was Doublefine that really brought it into the spotlight for a lot of people. And since then the number of projects both video game related and not has grown dramatically on the platform.

Kickstarter and crowdfunding is about one thing: Allowing someone to get funding for a worthwhile product from supporters. There has been some debate over the months as to whether kickstarter is a preorder program or a charity to donate to. The general agreement is that despite the money being raised that it is still charity with the bonus of receiving a game or product for your trouble.

The risk that we’ve talked about on the podcast is the fact that crowdfunding requires consumer confidence to work. If people don’t believe you can put out a product or don’t like your idea, then you’re not getting money period.

The first few months following Doublefine was akin to the Gold Rush for crowdfunding, as the excitement both from consumers and developers led to some massive successes. Project Eternity, Shadowrun Returns, Planetary Annihilation and so on each met and beat their goals and were examples of the advantage of kickstarter.

Projects that had a following, but were too risky for a major publisher or investor to back could still be funded thanks to the people who wanted to see it succeed. And that last line was practically why Oculus VR went to kickstarter and why the Rift succeeded. Ken brought this up on the podcast as to why he originally donated to the Rift: That he was excited at the prospect and potential applications of a state of the art VR device that was made at a cheaper price point than what has come out in the past. 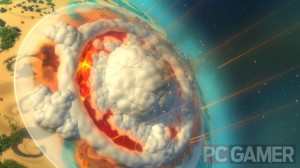 Crowdfunding led to a number of projects supported by people who wanted to see them succeed and had the confidence in the studios for them to get the job done.

Oculus VR had everything going for them: A new privately owned company with a radical idea and the support of fans and developers interested in its success.

And they were able to leverage this into not only having a successful kickstarter but also getting other projects and companies interested in working with them. If you looked on kickstarter following the Rift’s success, there were projects who boasted being compatible with the Rift or who would implement it as one of their stretch goals.

For the last two years Oculus VR pretty much could do nothing wrong and even managed to get John Carmack to leave ID Software to work with them. And last week at GDC, they continued to drum up excitement with the announcement of the next version of the developer’s kit.

And then the Facebook announcement dropped and now they are no longer working for themselves but for Facebook. The reactions have been mixed with some developers pulling support and deals with the Rift while others are more optimistic.

However the ones that are feeling the most upset are the kickstarter pledgers, the people who supported the Rift when no one else did. Many pledgers feel betrayed at how their money that was used to support this product was now used to provide Oculus VR with two billion dollars that they would have never seen if it wasn’t for them. Nor is it likely that the pledgers will receive anything from that buyout.

Now we already talked about how crowdfunding is a charity despite the opinions of others, but that doesn’t stop people from feeling that they are owned compensation for this.

And this is where things get murky: Oculus VR was a company that was funded thanks to kickstarter and the product they promised wasn’t even the commercial model, but a developer kit. Without this funding, Oculus VR would not have been able to develop the Rift or get the support that it did and therefore wouldn’t have been bought by Facebook and be pretty much worry free about money for awhile. 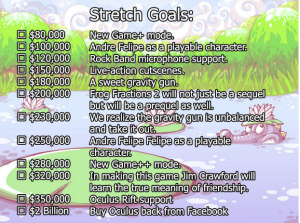 Developers have been voicing their concerns over the Oculus Rift buyout, in a variety of ways.

Numerous times on the cast we talked about how one of the positives of crowdfunding is that it gets people invested in your idea. This is where by donating to your cause they feel that they are not just a fan but an investor in your success.

And that’s great by the fact that it creates fans who are truly dedicated and interested in your product being a success. Or in other words, having an established consumer base before your product is even out.

However it also means that if you do something to betray or upset that trust, that those people will feel worse than someone just spending $10 on a crappy game. And we’ve talked about this before but kickstarter and crowdfunding in general, is a model based on consumer confidence. All those people who are upset at Oculus Rift, what’s the chance that they will donate and support another product like that ever again?

The future of kickstarter is still up in the air but the big question remains: Can massive projects like the Rift continue to find success on kickstarter? And that’s a tough one to answer as we have spoken to people on both sides of the fence. Personally, I think that it’s going to be a lot harder for big projects to work due to consumer fatigue over crowd funding and with incidents like the Rift or projects not living up to what they promised.

I’m not too worried about Indie or other small projects as the well developed projects and cheaper goals should keep them separate from other projects. It also remains to be seen what will be Oculus VR’s next move following the fallout and blow back from their announcement. Hopefully if Ken can manage to recover from the shock of the Oculus Rift, he will be able to write a piece explaining his thoughts on the matter.

The Waves and Rally Cry of The Oculus Rift