The Evolution of Boss Fights in Video Games

Boss Battles have come a long way since the days of dropping Bowser into the lava in the original Mario. With the evolution of game design and the growth of action-based genres, there are two schools of thought on how to design boss fights.

A basic concept that everyone needs to understand is about patterns and how they relate to enemy design. When we talk about patterns in relation to enemies, the pattern is what the enemy will do to attack the player.

This can be as simple as just walking at the player, to elaborate multi-hit combos and ultimate attacks. What’s important to understand is that every attack pattern is a fixed design by the developers. We have yet to see games reach the point of giving the AI emergent enough behavior to create original attacks.

With that said, let’s talk about boss design has split into two areas of focus.

Fixed Pattern boss design means that the boss is built around one pattern, or a repeated set of patterns. This is typically seen in action adventure games, RPGs, or old school 2D; with the former being a puzzle and the two latter requiring the player to figure out the pattern.

Fixed patterns can be challenging, but easily conquered once they are parsed out

Fixed Pattern fights are usually with unique enemies that will have a required way of beating them. Unless we are talking about speedrunning, there is most likely not a way to skip patterns or phases when fighting them.

Once the player figures out the pattern, the boss fight will serve no challenge, as demonstrated by high level speedrunners of games.

While fixed patterns are easier to design around, they do limit replayability of a title at best, or be an example of forced padding at their worst. If the player knows how to beat the fight, and they’re stuck waiting for each time to progress, then the game is going to become boring to them.

Random Patterns mean that instead of the boss or enemy using a set and unchangeable pattern, the boss will choose what attacks it will use during a fight. Remember, we’re still dealing with set attack patterns defined by the developer.

The big difference is that instead of the boss performing attacks 1, 2, 3, and 4 in that order; they may do 3,2,4,1, or 1,2,2,3, and etcetera. For this kind of design, there may be conditions that determine what attack the boss will use: Health, proximity, some other factor, and so on.

While it is still possible to exploit the boss’s patterns based on how you move around them, the player is required to be a lot more reactive compared to a fixed pattern. 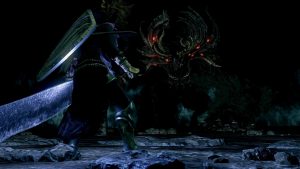 If you want to see the best examples of random patterns, you can look at any of the Soulsborne titles. What From Software did was create multiple pools of attacks for an enemy to use based on the conditions mentioned.

Due to the rate in which enemies attacked, they could quickly transition between the pools to create a loose sense of emergent behavior.

When it comes to challenging the player, random patterns are superior, but they require their own form of balancing.

The unpredictable nature of a random pattern for boss design does make things harder when it comes to balance. The difficulty of any random pattern boss comes down to the number of attack that the player must take into account, and how frequent the enemy will use them.

The cool-down between attacks, as well as being able to stun or knock the opponent out of an animation, are vital elements of balance and difficulty. As a designer, you need to keep a careful eye on how hard and unpredictable it is to fight a boss.

While the boss should keep the player guessing, there still needs to be something in the player’s arsenal to get around it. Going further, if your game is built on character customization, then that adds an additional wrinkle of providing different, viable methods depending on the builds in your game.

As we talked about with variance in replayability, you never want the game to devolve into one build or one strategy that always works. You can also adjust the overall difficulty curve of your game by purposefully making the starting bosses have longer cool-down periods.

The type of game and audience you are designing for will determine the kind of bosses that make the most sense.

If your game is not combat or player skill-focused, then fixed patterns are more than adequate. They also have the added benefit of allowing the designer to get creative with making it cinematic.

If your game’s combat system is detailed enough and you want to give the player a challenge, then a random pattern is the best fit.

One area that we didn’t cover is designing the enemy behavior for strategy or turn-based games, which would also be a random pattern. However, due to the complexity and different philosophy at work, it would be too big to talk about here.

To wrap up our post, can you think of great boss design that were either random or fixed; not counting those from the Soulsborne series.

The Crafting of Cultist Simulator With Alexis Kennedy