Last week Blizzard released the long awaited patch for the PC version of Diablo 3, featuring across the board changes to the polarizing experience. Such as loot 2.0, which brings the PC version in line with the console versions, while others set the stage for the expansion due out in March.

Regardless of if you loved it or hate it, Diablo 3 feels like a brand new game and has swayed my opinion to pre-order the expansion.

Before we get to the nitty gritty of the loot changes, let’s talk about how the Diablo 3 gameplay has been changed to be more engaging. First off, every class in the game has been given a touch up in terms of skills and general balance, tuning weaker skills to be better and reducing some of the more overpowered strategies.

There is so much here that I’m just going to direct you to the change log as there is a lot. In preparation of Reaper of Souls new “adventure mode” where the main story of the game is put aside for straight up hack and slashing, the difficulty levels have been completely redone.

Before, you had four difficulty levels of escalating difficulty, each one having to be beaten in order with inferno requiring you to be at the level cap of 60 to play. Now, the game simply tunes the enemies to the level of the player (Or host in multiplayer) and allows the player to set how hard the game is.

The new settings are normal, hard, expert, master and torment. The first three are open from the start, master requires you to beat act 4 once and torment requires one character to be at level 60. Torment also features six additional increases in difficulty, further making things harder.

Essentially, the harder you make the game, the enemies will have higher stats, experience and gold are boosted and the chance to find better gear grows. The end game gear that was introduced in earlier patches is now tied to torment difficulty.

With the rescale of enemy mobs and boosts to experience, players can now start a fresh character and have the game be incredibly challenging, while being rewarded for it. New enemy affixes have been added to spice up elite enemies and expect to just fight more guys at the higher levels.

The rebalanced skills and difficulty changes reduce much of the slog that was there in the original release. As an example, my new witch doctor was at level 36 just starting in act 2 after playing on Torment. As a comparison, originally I would hit level 30 around the end of the entire normal campaign at launch.

New enemy affixes add to the challenge factor and things are as chaotic as ever.

The Paragon system which acted as a magic find multiplier has been altered so it now acts as a prestige mode in a sense. Every time you level up after hitting 60 (or 70 after the expansion) you’ll gain a Paragon point.

These points allow you to directly improve your character in several categories such as increase health regen, primary attribute bonuses and more.

With all that said, we can now turn our attention to loot design and where the new Diablo 3 experience really shines.

First encase you haven’t heard, the gold and money auction house system will be turned off in a few weeks, just before the expansion is released. While Blizzard may never admit it, the auction house for a lot of people was a hated decision: Which seemed to reduce the quality of goods and discouraging playing the game in favor of spending gold or money just buying what you want.

Now what that means for loot design is several changing factors. First is how loot is generated, previously when a piece of gear drops, its statistics could swing either really bad or really good. That means you could either get nothing but crap equipment or find that one piece that practically triples your attack damage.

Blizzard’s intention was to make finding loot exciting like gambling: As in you’ll never know when something good would drop. However this caused two problems, first was that finding good loot was not a gradual experience. Because of how wildly it fluctuated, you could still use act 1 loot, way into act 2 due to not finding anything to replace it. And an unlucky streak meant no upgrades for an extended period of time.

Second was that it made a huge amount of the loot useless. Why use something with a variety of great bonuses, when you could instead just wear something that offered a 50% increase across the board in utility.

So the first thing that Blizzard did was tighten up the min and maximum statistics scaling for all gear, which you can read in the change log linked above. What this did was reduce just how much a gear’s statistic could fluctuate, so while you won’t find that “OMG EPIC LOOT!” after 30 drops of nothing, you’ll be able to gradually become better a lot quicker. 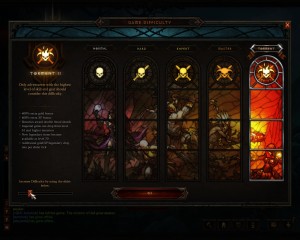 The new difficulty system provides a greater challenge for expert players from the start, while rewarding at the same time.

This coincides with the other change which is adding more skill affixes, including those that boost specific skills or damage types. Also included in loot 2.0 is the “smart loot” system, where now loot drops tend to skew towards your class.

And better still, you won’t find class’s primary attribute and exclusive gear mixing anymore. So no more barbarian weapons that gives a bonus to intelligence.

Crafting has been given a touch up, allowing you a better chance at getting something really useful. With new level 60 crafting recipes for awesome loot. Speaking of awesome loot, legendary and set items have been adjusted to provide more powerful bonuses, with many of them grand changing, such as giving a weapon a chance to cast a spell or some other crazy affect for example.

All these changes equals an across the board better feel to the gameplay, making sure that the game remains engaging regardless of your level.

While everything so far has been a great improvement, Diablo 3 still lacks what you could consider an endgame. While new challenges and recipes have been added, their drop rate is so low that it’s more of a lucky break than something to shoot for.

Blizzard already has something planned with the upcoming adventure mode that will be featured in the new expansion, along with raising the level cap to 70.

Still, the changes that have been added so far have gone a long way towards revitalizing Diablo 3 for my friends and I. If this was the state of Diablo 3 at launch, then I’m pretty sure there would not have been any complaints about the experience. With that said, all we can do now is wait for the expansion to see if Diablo 3 will hit its stride, or if this was a onetime glorious fluke.