As we’ve talked about, gamers these days are buying more games earlier in their development. Thanks to crowd-funding, someone can play a game while it’s still considered Alpha. But while crowd-funding is a tactic for Indie developers, major developers and publishers have their own way of getting early sales: Pre-order bonuses. And it has become another debated topic in the industry.

A prelude to the Project Ten Dollar strategy that came and went preorder bonuses follow the same objective: To convince people to spend full price on a video game. During the 90s, pre-orders were simply a way to get the game that you were looking for, as retailers like EB and Babbages infamously only got in copies of games that were pre-ordered.

Last decade with the rise of digital distribution, online stores and game sales meant that it was incredibly easy to buy a game that you wanted, no longer having to shop around to find a store on launch day that had a game. That also meant that the need to pre-order a game was diminished outside of collector’s editions, which due to their rarity and limited numbers, were always in demand.

In response, developers started teaming up with retailers for pre-order bonuses starting with GameStop. Just about every major game to be released had a corresponding GameStop exclusive pre-order bonus. Sometimes small like additional in-game currency to exclusive maps and costumes.

As time went on, pre-ordering reached a point where not only did the game have a pre-order bonus from the developer, but every store had an exclusive deal. All designed simply to get you to pre-order a game without any first hand information about it.

The Borderlands 2 season pass had a lot of value, but did confuse gamers with a variety of DLC left out of it.

With the increase in DLC sales, developer’s pre-order offers went beyond just a simple costume, but could include future DLC. For example Borderlands 2 offering the mechomancer for free or X-Com Enemy Unknown’s costume pack.

In these cases, the price of the DLC gets folded into purchasing the game and is an attempt to sweeten the deal. So that someone who would buy the DLC anyway, would be getting a better deal pre-ordering the game now and getting that content for free.

Another aspect of DLC pre-orders is the “season pass” — Where a designer will sell a collection of future DLC that the user can buy unseen at a discount. Usually the developer will give an idea of what the pass has. For instance a pass may come with 4 DLC packs and up to three costumes.

The problem with season passes is that it is once again asking the player to roll the die on questionable content.  If the DLC turns out well, then you saved a decent amount of money, but if the developer only puts out one quality piece of DLC then that’s another story.

The allure of preordering a game has declined for several important reasons. First is that there are simply more games out now than there were a few years ago. Why should someone commit money on a game that they have no idea about when there is so much on the market?

With kickstarter and crowd funding, you’re given a pretty clear idea of what the game is striving for and then can decide to spend the money or not. And spending the price of a traditional retail game on a kickstarter, the kickstarter will usually have plenty of rewards at that tier to make it worth it.

Going back to the start, the availability of games has also been a cause for pre-order decline. Thanks to digital stores, someone can buy any game they want on day one within seconds and have that game available to play within anywhere from a few minutes to a few hours. There is no need to have to search for a game at multiple retail outlets anymore.

But the biggest issue and the one that has affected games the most is just how much video games are depreciating in value, to the point where most new games can be found for anywhere between $20 and more off within a few months. 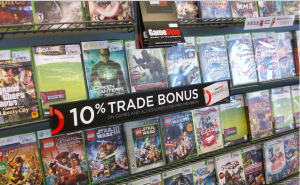 Gamestop’s use of pre-orders bonuses has been a major attempt at convincing people to buy games new and on day one.

Thanks to digital stores and a variety of sales, it isn’t worth it to spend $50- $60 on one game anymore. Even GTA 5 that retailed for $60 about two months ago was seen already at $40 in a few places and most likely even less once the holiday sales begin.

And there is of course the issue of DLC, as more retail games are being released with DLC options and content packs driving up the investment, again making it less appealing to pre-order a game. Especially as more games have a “Game of The Year” edition released that contains all the DLC at a discounted price.

Strange enough, the only times I pre-order a game now is when I can actually get a good deal on the game. That’s right; some stores now have pre-order sales before the game is even out. Amazon, Steam and others have gone this route, offering limited time discounts on games up to their launch date. And of course there is Green Man Gaming, who always seems to sell new games at 25% or more off.

The simple fact is that there are enough video games, both in terms of a title’s quantity and on the market that the need to secure a copy isn’t there. The only exception is of course collector’s editions as they are released as an actual limited quantity.  Collector’s editions with unique physical goods, not to be confused with digital special editions of games that may feature an art book or sound track.

The video game industry has changed dramatically over the last decade and the original intent of pre-orders is no longer needed. It seems like once again the AAA market are the ones facing problems with these changes while the Indie market has adapted reasonably well.

With kickstarter and crowd-funding, developers can offer a multitude of early adopter bonuses that can be either physical, digital or a combination to people. In fact, there is a post waiting to be written about the best ways to tier rewards and what to offer.

To me, pre-ordering regular games is on its way out as the market continues to be flooded with new games, sales and kickstarter projects. Time will tell if publishers and major developers will let it go gracefully, or fight tooth and nail to keep it going.