One of the easiest professions to try and enter has been game journalism. For many writers, gamers, youtubers, and streamers, the dream of getting paid to talk about videogames has become their goal. With the means of communication getting easier with each passing year, you can’t throw a metaphorical rock on the internet without finding someone calling themselves a “gaming journalist” or “expert on videogames.”

However, with this pool so wide, and still not really understood by all, it creates a problem when it comes to elevating the discussion on the game industry.

By fans, for fans:

A common theme of any site, streamer, or youtuber, that covers videogames is being a fan. In fact, the very first magazines and printed coverage of videogames in the late 80’s – 90’s were started by fans of games. These fans wanted to share their love of videogames and an entire secondary industry was born out of this.

Flash forward to this decade and we have YouTube and Twitch giving a voice to video critics. If you can capture footage and have a mic, you too can be a gaming critic. The passion and enthusiasm for videogame culture has also attracted people interested in talking to their favorite content creators about the games they love.

This decade could be defined for videogame culture by the boom of people talking about videogames. And in turn, the biggest names in videogame fandom are arguably more famous than the games they talk about. The weight an “influencer” can bring to a game’s marketing has become big bucks; as evident by Ninja now getting a multi-book deal on top of his Esports recognition.

There’s now an entire culture surrounding game journalism, with major sites acting as gatekeepers, and the battle between old and new school when it comes to covering videogames. And yet, despite watching countless videos, reading pieces on major sites, and even trying to break in myself, I find the state of game journalism to be on the low-end because of fandom.

The Bar of Game Criticism:

One of the most vital points when it comes to game criticism, and beginning to look at games deeper, is about understanding the design behind a title. To be able to analyze and game’s design and be able to explain where the core gameplay loop and systems of the game came from. This is something that many people claim they are “experts” at, but very few can do.

I’ve said this before, but major game sites are severely lacking when it comes to high-level examinations on design, and the same can be said of smaller sites and YouTubers. Just because you love cosplaying, or played your favorite series for hundreds of hours, doesn’t make you an expert on examining game design.

Even for myself, I can’t say that I’ve always examined games like that; it didn’t happen for me until this decade with starting Game-Wisdom and interviewing developers and not by just playing videogames all the time. Once you do it, that analytic viewpoint can never be shut off.

However, when you look at what people call “gaming journalism,” its’ often devoid of that understanding of development. In its place, you have softball pieces that are only aimed at other fans of games, with very little value for people interested in game development. Interviews with people in the game industry often come off as being fluff pieces; many times, the interviewers aren’t even talking to the people making the game in question.

A piece talking about why you cried while playing Gone Home has the same value as a 10-minute video discussing why the game industry is dying. The as-for-mentioned people who become famous talking about games tend to fall into the “superfan” category.

Attempts at trying to elevate the discussion on game development are met with constant roadblocks. Major sites are only interested in “flashy” pieces, or wanting people already famous in the space writing for them; and both Twitch and YouTube give a platform to those who are the loudest, but not the best, at talking about videogames.

Fandom has become the sole qualifier when it comes to talking about videogames, and while there is nothing wrong with being a fan, it does become a problem when that’s considered the only metric.

Being Serious on Games

In a piece I wrote about why game design is not magical, I talked about how the discourse about game design is very low throughout game journalism. Youtubers, journalists, and streamers are fans of games, but many of them don’t understand game development. 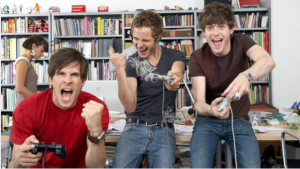 And these groups have become the gatekeepers in terms of what is considered the discourse surrounding games, and that is a problem.

While talking about the kinds of jumps in a platformer is not as “buzz worthy” as creating fan theories about the latest Fortnite season, it is arguably more important for someone wanting to learn about game development.

Talking to other fans about your favorite games or making cute videos about videogames is not how to measure someone’s understanding of game design. As I said further up, it took me years of talking to game designers to develop my critical approach to games; just playing them is not enough to make you an expert.

Unfortunately, being able to examine videogames is not considered a worthy metric when it comes to covering videogames, as I’ve seen firsthand with trying to talk to game sites about pieces. I’ve submitted pieces and reached out to sites like Kotaku, IGN, PC Gamer, and Polygon, and was either turned down or never even received a reply.

In this entire decade, I cannot remember learning anything new about game development from the sites mentioned. Oftentimes, when they try to cover something game design-related, it’s usually something that I already know and have beaten them to covering.

I know the information I’m talking about is not exciting, and that I don’t have the personality of a manic pixie, but there is more value there for people wanting to know about game design.

Perhaps the biggest issue with the state of game journalism is that it’s making my job to educate people a lot harder than it should be. I’ve been contacting libraries all throughout the country this summer, and probably into next year, about my presentations on game design.

For the ones who know what YouTube is, I must assure them that I’m not like the other people who cover videogames for a living. You can look up information on me online and there won’t be anything out there with me yelling, screaming obscenities, and so on.

But the very fact that I must explain that to people outside of the game industry is a problem. Even today, with billions of dollars in the industry and worldwide appreciation and growth, many people still discount game design and game development.

That videogames are nothing more than children’s toys and the people who cover them are just the entertainers making a fool of themselves for money. I at least have my first book as further credence to my skills, but how many people out there want to talk to someone who is just a YouTuber who is not already a fan?

As I said in the piece linked above, the discussion on game design needs to grow up, and so does the profession of game journalism.

(If you’re interested in joining the Game-Wisdom community, we have a discord channel)

THOUGHTS ON
“The Problems With Fandom in Videogame Journalism”