A Difference of Difficult Progression in Game Design

One of the oddest things I keep hearing people say during my streams and recording of the Darkest Dungeon is how much the game stresses them out; to the point that it has caused people to stop playing. Yet, no matter what happens, I never felt stressed out while playing the game, even if something goes wrong or I get an unlucky break.

And yet, playing XCOM and now XCOM 2 stresses me out to no end; to the point where I once almost broke my hand from punching my desk in anger during an Enemy Within play. Thinking about the two games and how they handled progression, both titles are about long-term progression, but their executions are what set them apart.

Both series are about short-term progression which then feeds into long-term; or what I talked about with layering progression. In Darkest Dungeon, you send your crew to bring back trinkets and resources needed to improve the hamlet; in turn, allowing you to better outfit and train them in the future.

With XCOM, squaddies go out into the field and will rise in rank, improving their abilities and available tactics for the future. Surviving missions gives you things to either research/unlock new gear or resources to help expand your ship.

In both games, you have the feedback loop of: Go out, survive, bring back resources, improve characters and gear and repeat. Both forms of progression are vital to win, but the player is most concerned about the long-term aspect, because that’s where they will ultimately win or fail the game.

A major part of both games is the Meta-Game angle that influences future missions and character progression. In Darkest Dungeon, trinkets provide important benefits and are either bought or found during quests, but the most important upgrade is for your gear. Leveling up the blacksmith allows you to upgrade weapons and armor for your classes, and is required to stand at least somewhat even with the latter fights. To get these upgrades, you need to find enough heirlooms and then have the money for each hero, but it’s definitely worth it. 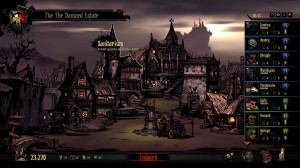 Darkest Dungeon is built around losing characters, and playing towards the long game

XCOM’s meta-game is two-parted as we talked about. You have your troops that unlock new skills and tactics as they level up, and then you have the gear you unlock through research.

Once upgraded and manufactured, upgraded gear becomes available for all classes, but your troops aren’t so lucky; lose your highest level squaddie, and you lose all their skills.

In the past, I talked about how much I liked XCOM’s take on meta-game design compared to Darkest Dungeon in terms of progression and avoiding grind. However, there is one major point that caused me to nearly break my hand in rage playing XCOM 1 and 2, and calmly watching my crew die to a shambler in Darkest Dungeon.

The End of the Road:

Both games have different philosophies on how someone should approach and play through them. In Darkest Dungeon, you are expected to lose characters; the developers even have a message on load up detailing that point. It’s not about the battle, but the war; every mission gives you more resources to upgrade the hamlet and therefore set you up for success down the road.

XCOM 2 is different; the game’s progression curve demands that you keep up with it or fall behind and fail. The game’s progression grows with or without the player’s involvement; every month, the enemies get harder, retaliatory strikes will happen and the avatar project grows. In other words, failure is not an option; despite the obvious fact that you can lose a mission. Too many elements of the progression curve in XCOM 1 and 2 are built on the player’s success, not their failures; whereas in the Darkest Dungeon, failure is expected. 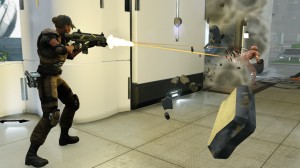 Whereas XCOM 2 is built on a progression curve out of the player’s hands, making it incredibly difficult to catch up if they fall behind

I know in the Darkest Dungeon that losing a hero is a setback, but not the end. I’m going to get back to where I was eventually, and even then, the resources and trinkets I earned will make sure that the next character will have an easier time.

There is no point of no return or end date to deal with (unless you play on new game + mode.)

In XCOM 2, it’s a different story. Too much of the game’s progression relies on luck, and I have the perfect example of that. Within the first month of play, you’re going to have a retaliation mission.

If you don’t have squaddies upgraded enough to unlock the first squad size upgrade or have to go with a group or rookies, your chance of losing that mission is almost guaranteed. And if you lose that mission, you will fall behind in terms of resources and tech, while the AI’s advantage continues to grow.

Of course, some of you are going to point out that Darkest Dungeon is also about luck and probability, but there is a difference. In Darkest Dungeon, I can mitigate luck’s impact through a variety of means: Buffs, trinkets, weakening the enemy, or simply retreating and getting the hell out of dodge. Crits are bad news, but it’s not like one crit is going to doom my mission and therefore doom the entire playthrough.

In XCOM 1 and 2, an enemy can critically hit you through high cover and kill a squaddie; there is a percentage chance built into the design and rule set to allow that to happen. When that does, there is nothing that the player could have done to mitigate that event; if it happens during those first two or three missions and you lose your highest ranked squaddie, you should once again just restart everything. The reason is that without having high ranked squaddies, you can’t upgrade your squad size, and you lose out on their abilities to help even the odds.

That example is also what causes my blood pressure to spike, because that is the case of me failing without any ways to learn or grow from it. When you lose in the Darkest Dungeon, you can at least take the knowledge with you for next time. However, what can I learn from my squaddies missing 75% and up shots to then be critically hit?

Another important point that needs to be mentioned is the fact that the player dictates the progression in Darkest Dungeon unlike in XCOM. Based on the levels of my heroes, I decide whether to take on easy, medium or hard quests; the game does not force me to only take medium quests after X amount of days.

I know at this point, you might be asking, “So, what would fix things for you in XCOM?” Because XCOM is about fighting an active force and not a passive one, there has to be that win/lost factor. At the same time however, the game’s progression model should not rely on both perfect play and luck. 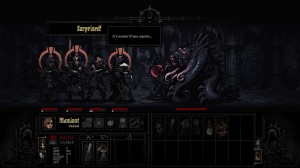 Failing a mission in Darkest Dungeon is not the end of the world; you can always recoup and come back with the knowledge to win

I don’t think there should be upgrades related to squad rank, or at least have them further into the game.

The initial upgrade from 4 to 5 squaddies is HUGE; to the point where your playthrough’s success will be based on whether or not you get it early enough.

The escalation period should take longer, or at least give the player some way to impact it.

While things should obviously get harder over time, there should be ways to improve lower ranked classes without forcing them onto a mission meant for high levels and crossing your fingers that they survive; again, having one squad wipe should not put me on the path to failure.

The less luck has to do with determining whether or not a 20 hour play ends at 30 minutes in, the better; hopefully, that will lower the chance of me breaking my hand in the future.

Meta-game progression is one of the best ways to keep the player engaged in multiple systems and allow the player to make progress on multiple fronts. However, when too many elements are out of the player’s hands when it comes to succeeding, that’s where frustration will set in.

I’ve said this before, but the best games that handle difficulty are those that place the lost on the player; whether it’s because of a lack of knowledge or skill, if the player has room to grow, then it’s not going to sting as much. But when a lost comes down to the game inherently saying, “Time to lose,” then the progression model is not the carrot on a stick, but the noose around a neck.