In my previous post on fighting game design, I touched briefly on the concept of technical play or advanced maneuvers that go into making a great fighting game. However after typing that, I realized that the core concepts were still not fully explained for people new to fighting games. For this post, consider it a part two talking exclusively about what is technical play.

One of the cornerstones of technical play and taking that step from casual to competitive play has to do with understanding the importance of positioning. Positioning refers to knowing where you are in relation to the enemy’s attack and vice versa.

If you know the range of your straight punch for example, you can use that to punish an enemy who gets into that exact range or use it to push someone back. Knowing what attacks will attack where is a major part of positioning. Most fighting games have aerial attacks and knowing which moves will counter it and their respective ranges is critical.

This is where the concept of “footies” comes into play: Where players will use basic attacks to control the space around them and force their opponent to react. It may look like these players are just throwing quick attacks for the sake of it, but what they are doing is trying to force their opponent to perform an action that they can capitalize on. 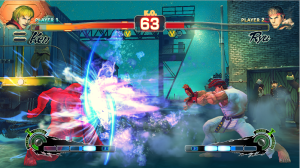 Fully making use of special attacks requires the player to know the ways their opponent can respond and capitalize on that.

To a novice, throwing a special move is simply used to do damage or to spam over and over again, but expert players know that there is far more that goes into it.

Special moves have two important functions to them when it comes to technical play. First going back to positioning, special moves can control the space around the player and help to force the enemy to respond.

With the hadoken from Street Fighter, there are three responses that the enemy can choose from: They can either get hit, respond with a projectile or jump. Jumping means that they will either jump straight up, forward or back from their original position. For the attacking player, they can capitalize on the enemy’s new position with a follow up attack or get extra breathing room.

Another part of special move design is the concept of invincible frames: Where an attack will leave the performing player invulnerable to damage during specific frames of animation. Single player fans may know this concept for the Dark Souls series where by performing a roll, there were certain parts of the animation where an enemy would not hit you.

Invincible frames allow someone to time special moves with the purpose of either hitting an enemy through their attack or as a secondary defense to gain ground while avoiding the hit.

Combining special moves and positioning is where the final concept for this post comes into play and it’s a term that I’ve used a lot in the past.

Punishing refers to the act of responding to an enemy attack or choice with the exact counter, leaving them in a position where it would be impossible to defend against. This is the desired result when it comes to using positioning and footies during competitive play.

Here’s an example from Street Fighter: Let’s say that your enemy is playing as Ken and performs the shrouken sending them up into the air to do the uppercut. If you were blocking or simply out of range, the enemy would be left completely defenseless for several seconds allowing you to counterattack.

Here, Guile’s attack was blocked, leaving him completely open to a counterattack or punish.

Punishing is essentially the perfect counterattack to an enemy’s action and part of the challenge in a fighting game is figuring out the best ways to force your opponent to make a move that you can punish.

This is where the idea of reading your opponent comes into play which is simply trying to guess what action they’re going to perform next.

As you can see, there is a lot of thought and decision making that goes into high level fighting gameplay. And these elements are what separate casual players from the competitive ones.

Lastly I want to touch briefly on single player design with fighting games. These elements mentioned here can be used in single player games and depending on the complexity of the AI could break the game.

The problem with designing singleplayer content around fighting games is that it’s hard to know just how far to take it. An AI is obviously not a human and doesn’t respond the same way. Many fighting games feature harder than normal bosses or battles because the AI was programmed to follow the player’s inputs and knew just how to respond.

This is why we don’t see too many singleplayer only fighting games as the amount of work needed to make a realistic AI doesn’t make sense when you can just make an online or multiplayer mode and let players fight against each other. And this way the designers leave the singleplayer as an extended tutorial to get players ready for the real thing.

But we have been seeing cases like Injustice where developers create a fully fleshed out singleplayer campaign to add value for people who aren’t interested in multiplayer. Creating singleplayer fighting game content is an interesting topic, but beyond the scope of this post.

Expert level fighting game design requires a lot more thought than meets the eye. Technical play as mentioned in the last post is taking that step towards game mastery and a requirement for anyone wanting to reach the competitive level.

No Podcast This Week