The Three Basics of Horror Design

Halloween always means horror, and it gives me yet another excuse to talk about the best ways of designing horrific situations. Horror is an art, and there’s more to it than just being chased around in the dark. For this post, we’re going to look at three essential elements that you must have in order for your game to be treated as a horror example.

The build up and release of tension has been a topic I have talked about a lot in the past, but still remains as point one when it comes to horror. So much about getting horror right is focused on creating the atmosphere to terrorize the player or viewer.

There are a lot of elements that go into creating a tense atmosphere. You have the aesthetics of the game, the music/sound design, knowing where and how many enemies should be in an area; even going as far as the player’s ability to see the environment around them.

As we’ve talked about many times before, releasing tension is just as important as building it up. A jump scare can only work once, what you want to do is create a situation that keeps releasing the tension in different ways. This could be reaching a safe zone, having a new kind of enemy, or even messing with your own established rules.

Controlling the tension is one of the major areas that longer horror games tend to suffer, as once the player has seen all the tricks of the game, there won’t be anything else that will surprise them. The only ways to keep it from happening are to either focus on a short experience, or keep creating new situations or challenges for the player to deal with.

With that said, no matter what, you must always think about the player’s control over the situation.

Player Agency refers to the player’s ability to control what is going on in the game. It can refer to either gameplay or narrative choices, but for horror we want to focus on gameplay.

Player agency and horror go hand-in-hand with discussing fight or flight. The best horror games know to balance the player’s agency in terms of their options during play. If the player has too much control or power, then they won’t become afraid. In a game like FEAR or Doom, the player is the most powerful figure in the game, and no amount of creepy ghost girls or demons from hell will change that.

However, if the player has too little control, then they lose any notion of fear due to how simple the gameplay is. In a game like Amnesia or Outlast, once the player understands how limited they are at the game, they begin to see the “man behind the curtain” and are taken out of the experience.

One of the major aspects that Alien Isolation got right was how the xenomorph took the player’s control away from them. When fighting humans and the androids, the player could usually outfight or outrun the opposition. Once the xenomorph came into play, the player must go on the defensive, because they are fighting something that couldn’t be killed.

Controlling the player’s agency is something that I would like to see explored more in co-op-based games. Right now, the two most popular games I know of are Friday the 13th and Dead by Daylight.

The player’s control over the situation should wax and wane

Going back to the term fight or flight, the player should have to make that decision with every encounter in the game. What separates horror from other genres when it comes to fighting is that the player should understand that maybe they shouldn’t be fighting every enemy.

Being able to keep messing with the player’s agency takes us to the final point, and where long horror experiences tend to fail.

Ultimately, what drives horror is the fear of the unknown and keeping the player (or audience) guessing. The problem with video games is that just about every horror game ever made tends to run out of steam. When you’re dealing with fixed environments and enemy types, there will always be a point when the player has seen everything that you can throw at them.

For Resident Evil 7, I found the first half of the game to be really good for horror, but the back half to be repetitive. The reason being was I knew all the enemy types and situations to expect. In fact, the final part of the game is simply fighting through waves of enemies before getting to a scripted boss fight. 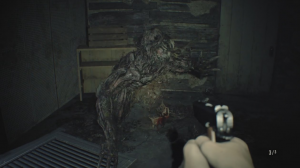 The more things stay the same, the less chance of generating horror

From my video, I think this is where horror games need to adopt rogue-like elements in order to keep the game from becoming routine. Anything you can do to prevent a set pattern from appearing would work: Randomized enemy places, random or procedural level designs, different events, etc.

Some series try to hide how the mechanics work, such as Five Night’s at Freddy’s, in an attempt to make it harder for the player to understand the systems. The problem with this strategy is that you’re not creating more depth to the situation, but just making it take longer to figure out.

Horror games are one of the hardest to design for despite the number that has come from the indie space. I’m still waiting to see someone try to make a next generation horror experience that is more than just jump scares and sneaking around.

What are some aspects of horror that you would like to see games attempt?

How to Measure a Game Mechanic or System