The Challenges of Cross Platform Support with Albion Online

Making sure that your game works across multiple platforms is both a challenge and necessity in today’s market, but some platforms such as mobile and PC can be hard to do properly. Which is why it was interesting to talk to David Salz of Sandbox Interactive about the MMO Albion Online, and how they are creating a MMO for both PC and mobile users to play under one world.

David Salz is the Technical Director (CTO) and Co-Founder of Sandbox Interactive. He has more than 12 years of experience in games development and programming. Before joining Sandbox Interactive, David was the owner of Bitfield where he developed award winning games such as “Giana Sisters DS” or the widely licensed Nintendo DS engine “BitEngine DS”. He holds a Masters degree in Computer Science from the Humboldt University of Berlin.

1.  To start things off, could you tell us a little bit about your studio and Albion Online?

The idea behind Albion Online was to make a true sandbox MMO. We feel that most existing MMOs are getting too “soft”. Winning is only fun if you can also lose. We wanted to make a game with a heavy focus on PVP and guild gameplay, a game in which risk brings reward. We also wanted a true player-driven economy, where every single item and building is created by the players. Because of that approach Albion offers many different play styles – gathering, farming, crafting, diplomacy, PVE
and PVP combat – it’s really up to you.

2. MMOs by their design are games that are very tricky to manage on one platform, let along multiple; what was the reasoning for getting the game to work cross-platform?

Platforms are just a technical detail. Why should players have to care about different operating systems or different device types? I just want to play my favorite game on whatever device I happen to own. And mobile devices are becoming more and more important so it is logical to include them. Being able to play the game on the way to work is just cool.

3. For people reading this who aren’t as versed in game development, could you go into a little detail as to why Albion Online having cross-platform play is a different beast compared to MMOs with dedicated versions for each platform?

We want the game to be exactly the same on all platforms. So the mobile version is not a “companion app” and not a “light” version of the game – it is the full game! In addition, there is just one game world – for all players and all platforms! The advantage is that you can switch platforms any time. You can play on your MacBook at home, on your Windows PC at work (during lunch break, of course) and even on your Android tablet while waiting for the train or in the park on Sundays. 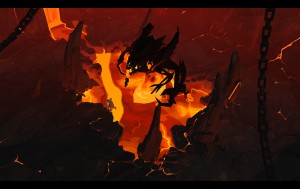 The art style of the game needed to fit on multiple platforms.

4. As we just talked about, a MMO can be a complicated game to manage, between both supporting the game and developing new content for it. How are things different in this regard with a game like Albion Online, knowing that the game must work on multiple platforms at once.

From a technical perspective, cross-platform development is a big challenge. Modern technology like the Unity game engine helps a lot, but the fact remains that a modern PC is easily 10 to 20 times more powerful than a mobile device. Especially the memory limitations of mobile devices are a constant challenge.

We had to find a graphical style that works with the limitations of mobile devices and still looks good on a gaming PC. The ambition to have the same game on all platforms sometimes requires compromises. Admittedly, most of our players play on PC right now, but we consider mobile support an important investment in the future!

5. Another major point is in terms of control and UI design. What kind of unique or interesting hurdles did you have to get around with designing a game meant for different platforms and different ways of interaction?

Some differences are obvious – there is no right-clicking on a touch screen and no hotkeys without a keyboard. Because of that you will not be able to competitively play PVP battles on a tablet against PC players. But that is not our goal. The game plays great on mobile and we expect that PC players will use tablets or phones as secondary devices.

Most PC gamers prefer a flat rate that is higher, but one time; while mobile consumers like having microtransactions that let them quickly get what they want and get back to playing. In terms of game design and perception, how did you decide on how microtransactions will impact the game and pricing?

We will have the same business model on all devices, combining both elements – a one-time fee and microtransactions in a (from our point of view) very fair way. Albion Online will be a buy-to-play title – currently realized through our “Founders Packs” and later through so called “Starter Packs” that each give you “eternal” access to the full(!) game, including all future updates, extensions, etc. At the same time, players can buy a premium currency in order to upgrade their characters to “Premium”, which does NOT give them a power but a time advantage in-game. 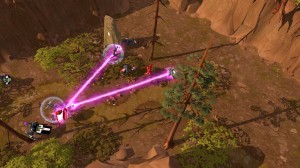 The game features PVP between the different platforms as well

It is important to note though that players who play a lot can also get the Premium status without spending real money. In summary, we wanted to have a strong business model for Albion Online that is NOT pay-to-win and that allows us NOT to focus on the implementation of aggressive monetization measures as seen in many mobile games.

Instead we much rather spend our development resources on making that game better and more enjoyable.

7. From a technology standpoint and a stupid question from me, are the servers used to run the game different in any way compared to MMOs built for one platform?

The cross platform aspect does not really have an impact on server development, especially since the game is exactly the same on all platforms. The real challenge is that we want Albion to be one big game world. Meaning: we have to fit all players on a single server. That ambition creates both technical as well as game design challenges.

8. To begin to wrap things up, I have a few general questions about Albion Online. First, what is the current state of the game for people interested in it?

The game is currently in closed beta, meaning we are still making significant changes to the game. For example, we are going to launch a much bigger and more diverse game world in the coming months. If you buy a Founders Pack now, you have the chance to influence the direction of the game. Community input is extremely important to us. Founders also receive unique items and perks that will not be available later. 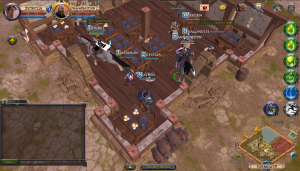 Social aspects are very important to building the community as one big group, instead of different platforms.

In summary, we are quite confident that we have a very solid foundation of the game in place that players enjoy playing and are now making the necessary steps to get Albion Online ready for launch later this year.

9. Do you have a release date set?

We don’t have a fixed date, yet. I can say though that it will still happen before end of the year but not before August either.

10. When the game is officially released, what kind of update plan are you thinking about in terms of releasing new content for it.

We will obviously keep working on Albion after release. You can expect new content and new features every 6-8 weeks; in addition there will be smaller updates with bug fixes, balancing changes and small improvements on a regular basis. We are essentially doing this already; since the start of the closed beta, we have released two major content updates (code named “Aurelius” and “Brutus”), the next one (“Cador”) is scheduled for the end of March.

11. And finally, do you have any final thoughts or something you would like to say to any fans reading this?

We want to say thank you to all our founders! Community feedback has always been a cornerstone of our development efforts. A lot of guilds and individuals have been with us for a long time now, some for almost three years, relentlessly testing new builds and new features, providing feedback, suggestions and new ideas. So: THANK YOU – You guys are awesome, we could not have done it without you! And the best is yet to come!

Thanks for taking the time out for the interview and good luck with the rest of development.