The Future Fighting of Furi and Action Game Design

Furi is an up and coming action game from The Game Bakers and this is their first attempt at making an action game. I had a chance to talk to them about what makes Furi different from other games with its focus on boss fights and combat system.

The following interview was done with Emeric Thoa, Creative Director on Furi.

1. To start with, for people who haven’t heard of the Game Bakers, could you tell us a little bit  about your background and studio?

The studio was created in 2010 by my partner Audrey Leprince and myself. We have worked in the industry for many years before The Game Bakers, mainly on AAA games for Ubisoft. With The Game Bakers, we’ve developed colorful and deep mobile games like Squids or Combo Crew, and we’ve also made a special version for the Wii U and 3DS. Now we’re working on a console & PC action game, Furi. The particularity of the studio is that it’s “in the cloud”, meaning a small part of the team is in Montpellier, south of France, but all the rest of the team is split around the world. We are a team of 18 working from 13 different cities.

2. With Furi, what led you and your team to developing an action game of this kind?

After making mobile games for a few years, I wanted to go back to designing for a controller. It’s a completely different design and I wanted to go back to the roots, to a skill-based gameplay, very arcade in its design. It’s very Japanese actually: very reactive, fast-paced. The trend is not to do this kind of gameplay and execution, but I felt it was a good thing. Being a small studio is a lot about creating something unique and off-trend.

Furi is all about fights with bosses; making sure that each fight is entirely unique

3. One of the more interesting elements about the game, is the fact that it is strictly bosses only fighting; something we don’t see from a lot of action games. What was the decision to focus on this one specific part of gameplay?

We chose to make less features, but make them excellent. We chose to only boss fights, but unique and excellent boss fights. “One edgy feature with excellent execution” is our direction for being a “triple i” studio.

4. Continuing from that point, what kind of approach are you taking with designing the bosses and making sure that they are distinct?

To make sure we would have enough variety in the game, we decided to rely on two different gameplay types that are both pretty deep: a traditional beat ’em up gameplay with sword fight, and a more original shoot ’em up part. With these two gameplay we can craft enemies that are relying on very different attack patterns, with different pace, with different fighting styles. In addition to that, the characters themselves, design by famous manga artist Takashi Okazaki (Afro Samurai) are pretty unique (and awesome).

5. The screenshots show off a very stylized aesthetic for Furi, how did you decide on the look that you wanted for the game?

From the start we wanted a stylized approach. We wanted a unique gameplay, a unique soundtrack and a unique art style. With so many games releasing these days, you need to be “outstanding” on all fronts. Trying to match the “realistic” AAAs would have been a losing fight. Also, I love a stylized art style and flashy colors ;-).

6. A major component of any action game is the combat system, and we’ve seen a huge range of designs: From button-heavy games to those built around positioning and timing and everything in between. What kind of combat system are you designing for Furi?

It’s much more the latter. I’ve been playing games with tons of combos for years, and always ended up using the same two or three of them. In Furi, there are only four buttons used and no real combo. It’s all about timing, reflex and positioning. It’s like a musical instrument, like a guitar. It has only six strings, and when you start playing it you suck, but if you practice you can produce incredible music and become a virtuoso. Furi is about learning how to use a few abilities, rather than learning by heart combo lists or upgrading your sword by spending gold or XP. 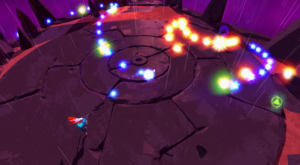 7. Another point about the combat system is in regards to progression. Does the player start with everything available, or will new abilities and move-sets become unlocked through play?

There are no upgrade or experience or skills unlocked. The variety and challenges come from the guardians. They are all asking to master something different from this small set of abilities you have, and each fight is a new challenge to overcome. A side goal for me is that Furi becomes a new reference for the “easy to learn, hard to master” catch line.

8. The action genre is traditionally one that we only see the majority of them on the consoles; with that changing very recently with titles like DMC, Dark Souls etc. Are you approaching the design any differently by the fact that you are working on two different platforms?

I think times have changed and PC players have more varied taste. I believe PC players can also enjoy this kind of niche genre as long as they have a gamepad. Although we will support keyboard and mouse, the game is really designed for a gamepad, otherwise, for this kind of game, there is not much difference from the two platforms.

9. The action genre is also one that has grown in terms of depth and style, thanks to the big names mentioned in the last question. When coming up with the design of Furi, were you inspired by any particular games?

Oddly enough, the games that inspired me were more about the characters than the gameplay. No More Heroes or Metal Gear Solid are not the best beat em’up gameplay wise, but they have incredible character design and boss fights. DMC or Dark Souls didn’t really influence Furi’s design, we can’t do like them anyway. Actually, the game that influenced Furi’s gameplay the most is… Super Punch Out! Hope you’ll notice the similarities when the game is out 😉

10. To start to wrap things up, because the action genre is so skill-driven, it’s one that can be critiqued and broken down by experts in terms of feel and playability. In your opinion, what elements do you think make up a great action game, and which ones are red flags for ones that don’t work?

Controls, signs, and feedback are really the key to all these games. For me, the character must be very responsive, and the enemies must have very legible attacks and feedbacks when getting hit. I don’t mind getting crushed and losing 50 times at the same level if I know very clearly what I’m doing wrong, that it’s my fault, and that I can improve myself. 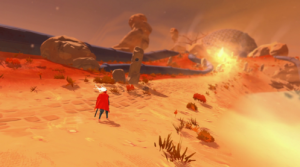 In a very abstract way, the game Super Hexagon is the perfect representation of this ideal: although it’s super hard, it is addictive because it is fair.

Somehow, I felt that the underrated gem God Hand had good qualities in this regard, it had so-so execution, but it was a great game of skills without too much complexity.

11. And finally, do you have any final thoughts or something to say to the fans reading this interview?

In addition to the gameplay, we have also a very deep and meaningful story, and a crazy cool soundtrack. I hope Furi will find its audience; it’s really unique and memorable. I’m super proud of it.

Thanks for taking the time to answer these questions and good luck with the rest of development.