Jeff Vogel is the self titled “crazy old uncle” of Indie game development and his studio — Spiderweb Software is one of the longest running game companies celebrating their 20th anniversary this year. He has created a variety of deep RPGs such as Geneforge, Avernum and more while having a view from the inside of how the Game Industry has changed over the last two decades. And it was a pleasure to get a chance to talk to him about his views on RPG design, game development and the industry itself.

1. I want to start off with some general Game Industry questions. You and Spiderweb Software are considered somewhat “The Old Guard” when it comes to developing PC games, having been in the industry since the mid 90s. As a developer who has been through the major shifts in the last two decades, what milestones or major events that have taken place do you feel have had the most impact on how you design games or run Spiderweb?

Yeah, it’s been a long time, and the way I’ve changed my process or approached things have been tweaked in a multitude of ways over the decades.

The two biggest changes: First, the Internet bubble/period of mad growth in the late 90s. In particular, the growth of the web. It’s hard for game developers today to imagine how weird and crude shareware development was before the world wide web came along.

Second, of course, is the rise of Steam, which completely revolutionized PC games development in every way.

2. I read your blog post about the Indie Bubble Burst  and found it really interesting as most of the Indie developers I’ve spoken to have talked about the Indie market continuing to grow and that the AAA market is going to burst. The devaluing of video games is both a blessing and a curse: It’s great for the fans who get to experience more games, but it means that they become conditioned to wait for these 75, 85 and higher percent off sales.

Given the rate of how the Game Industry has changed, do you think that we will ever move backwards from these sales or have an idea of what needs to happen for this to change?

For a period of time, the strategy was to be on the front page of Steam, charge a low price on games to suck people in, and sell a jillion copies. We did this for a few years, and we did great. However, there are too many indie games coming out for most of them to be able to use this strategy. We can’t charge $10/copy anymore for our niche product. 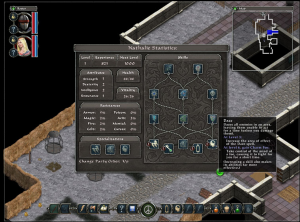 So, instead, niche devs like me need to take time, build a loyal audience, and charge that audience the amount needed to stay in business. (This price tends to be around $20.) This is a tough thing to do, but, in the long run, it’s the only way most of us can make a sustainable business.

3. And a follow up question, what are you thoughts on how the AAA Game Industry has developed over the years? As I mentioned, a lot of people feel that the AAA market is becoming too homogenize and expensive to sustain itself leading many to think that we’re due for another major company to go under like Take Two.

Fewer companies, making bigger and bigger blockbusters. Meanwhile, an active indie scene will take care of the many niches. I think it’ll be a pretty good place to be, actually. Tons of good games are coming out every year at reasonable prices, so I can’t complain. As for the health of AAA companies, I honestly have no idea. Too much about their sales is secret for me (or just about anyone) to give an informed opinion.

4. One element that I found interesting from a sales perspective by Spiderweb was how long the company made use of shareware or demoware for demoing games. Which for those reading this who aren’t familiar is the act of letting someone download a game but only play a certain percentage of it for free.

The use of game demos have been steadily decreasing with early access, let’s plays and free to play design. Many people these days question if games still need demos or not and I was wondering what are your thoughts on how this marketing strategy has changed?

Obviously, I can’t say a demo is necessary. Look around … It’s just not.

I think for games like mine making a decent demo available is both necessary and ethical. It’s the right thing to do, to make sure the game will run on their machine. However, this has to be decided on a game by game basis. 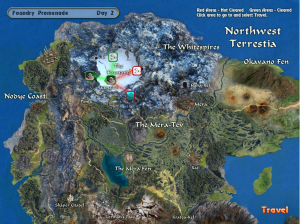 World building is a big part of Spiderweb’s lineup, with each title having unique mythology, characters and situations.

I would point out, however, that ungodly amounts of money are being made by games with huge, extensive demos. We just call them “free to play” games.

5. Moving on, the RPG genre is one of a few genres that has transformed over the years thanks to developers like Bioware, JRPGs, etc. And this has made it hard to distinguish just what is an RPG. A while ago I caused a small debate on Gamasutra asking that very same question. If push came to shove, in your opinion how would you define what is a RPG?

There are some debates/discussions that just make me tired, I’m afraid. One of them is “Are games art?” (Answer: Yes.) Another is, “Is this a game?” (Answer: If you are asking, then yes.)

Similarly, I don’t like “Is [X] part of [Y] genre?” discussions. Each game is its own unique creation, and each game succeeds or fails on its own merits. Of course, giving a game a genre is VERY valuable for marketing purposes. However, that’s all genre is. A vague label, defining a fuzzy thing.

6. Continuing from the last question, I wanted to ask you what are your thoughts on the ever debated issue of JRPG vs. CRPG/Western RPG? Do you feel that one style is superior to the other? And are there any JRPGs that have attracted your attention for one reason or another?

They’re very different styles, both with pros and cons. I’m too old take take part in the eternal, annoying “Is [X] or [Y] better arguments?” If you can’t find value in Final Fantasy VII or X or Dragon Quest, I think that’s unfortunate. I love those games.

I wish they would tune down the meaningless, random fights about 50%, though.

I always start with the story and then that informs everything about the design. It’s the only way I can work. But that’s me.

8. Recently someone commented on a post of my examining morality in game design, specifically RPG choice and how many RPGs go for the unrealistic “goody goody” or ” mean jerk” when it comes to morality and they brought up a question on how do you define morality in video games.

Your RPGs are not only built around huge worlds to explore but also letting the player decide how the people react to them. As a game designer, what are your thoughts on instilling a sense of morality or building consequences into your game worlds?

I absolutely love to make worlds with rich, interesting political situations. I insist on giving the player hard choices, decisions that are not “good” or “evil”, but places where the paths before you each have their own good and bad points. I want every choice to be tricky, to require actual thought. It’s nice if the decision makes a big difference in the storyline, but it doesn’t have to. The important thing is forcing thought.

9.One of the attractive elements of RPGs for people interested in gameplay are the unique systems and mechanics that you can have. What kind of inspirations or designs do you use when coming up with how your RPGs are played?

I have a pretty basic RPG template I stick with, and then I vary it from game to game. Different abilities, way combat flows, length of combats, but the core of the system remains the same. 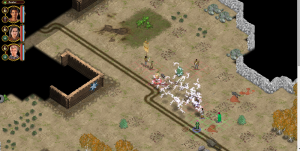 In keeping with classic RPG play, all of Spiderweb’s titles feature turn based combat.

In the end, I’m more of a “story guy” than a “systems guy.” My game systems have their weird quirks and such, but I think they’re a lot more functional.

They serve to tell the story and move things along, but that’s not where my real creativity is.

10. With the RPG genre being such a varied genre, are there any games in particular that you feel represent the best examples of it or ones that still hold up to modern audiences?

Wow, I’m having a much harder time answering that than I should. Over the years, I’ve really gotten tired of RPGs. Playing them addictively for over 30 years will do that, I’m afraid. The last RPGs I really got excited about and couldn’t pull myself away from were Skyrim and Dragon Age: Origins, which will destroy any credibility I have for a lot of serious RPG fans.

But if you want me to talk about how much I loved Saints Row IV or The Last of Us, you won’t be able to shut me up.

11. My last question is about the future. You’ve been designing games at Spiderweb for two decades now and have watched and worked as the Game Industry has shifted and changed. Do you see yourself changing or going in a different direction with your games to match the times or continuing to do what has worked for you all this time?

I’m old. I’m cranky. I get tired more easily. I’m fixed in my ways. And I have a really solid back catalog to sit on. In a few years, I’m going to give the Geneforge games a serious remastering, and I have some ideas for how to tweak the game system I think players will really enjoy.

I plan to rework old games (quickly) and write new ones (slowly). I can’t retire yet, and I’m no good for anything else.

Thanks for taking the time to answer these questions

For more from Jeff Vogel, you can check out his blog — The Bottom Feeder