Games within games aren’t a new concept, but they’ve come a long way since their first iterations – For example, the sliding puzzle Easter egg game that can be unlocked in 1987’s Final Fantasy, which is widely acknowledged to be the first RPG minigame ever.

Wikipedia defines a minigame as:

…a short video game often contained within another video game, and sometimes in application software or on a display of any form of hardware. A minigame contains different gameplay elements than the main game, may be optional and is often smaller or more simplistic than the game in which it is contained. Minigames are sometimes also offered separately for free to promote the main game. Some minigames can also be bonus stages or secret levels.

So, with that in mind, let’s take a look back at minigames through the ages…

As mentioned above, this minigame (an Easter egg) is widely acknowledged to be the first minigame ever to be included in an RPG.

You’ll be redirected to the minigame, where you need to rearrange the sliding square (numbered 1-15) so that they’re in order.

This minigame hides within the SNES classic Mario Paint and many argue it was more entertaining than the vessel in which it was held!

Players have to control a hand holding a fly-swatter and keep swatting until they completed all three levels (including a final boss that took the form of a robot wasp).

That’s not it though. Gnat Attack loops endlessly for as long as you want to play, getting harder and harder every time you complete it.

Often hailed as one of the best scenes in the Final Fantasy series, Opera House is a minimalist minigame that demands the player memorizes a series of script lines that must subsequently be recited during a live (chiptunes) opera. 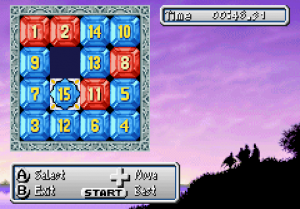 a classic example of a minigame in the original Final Fantasy

Galaga is basically a stand-alone game within a game, so not so much of a minigame at all but a bonus!

It’s thanks to Namco’s size that they were able to afford to insert a classic space shooter like this into a great game like Tekken.

Players can play Galaga while Tekken loads and completing all eight stages allows you to unlock a special costume for a character within the main game.

Classified as one of Luigi’s minigames, Picture Poker is a casino-style card game which sees its players betting coins that their hand beats Luigi’s.

Once you’ve been dealt your hand, you can bet more coins or have some or all of your cards switched out for random cards from the deck and Luigi, in turn, does the same with his hidden cards.

In the event of every opponent having the same hand, then a ranking system determines who wins (highest to lowest):

In contrast to Mario 64 DS, the Poker game within RDR2 is incredibly sophisticated, both in terms of the game’s graphics and AI.

It can be played anytime at five locations, which include:

The game played in RDR2 is Texas Hold ‘em but, unlike the original Red Dead Redemption, there is no option to cheat, so you’re going to have to play fair!

THOUGHTS ON
“The Evolution of Minigames”