Enemy design goes hand in hand with health as a realistic fallacy of game design when we talk about realistic or realistic-looking games, as nothing says “realistic situation” as one person fighting an entire army by themselves.

For as long as video games have been around the player has had to single-handily fight their way through armies of soldiers, zombies and what have you. No one knows for sure just how big these armies were as most of the time, enemies would just spawn in from off-screen.

With this generation, we’ve seen games try to tell the story of how one person could take on an enemy army and not only win, but were apparently also better trained. We’ll talk more about being “better trained” later on in the series.

Nathan Drake as an archeologist has probably killed more men in all three Uncharted games, then what actual soldiers have done during a war. Even with the family-friendly Mario, how much blood has he spilled on his one man mission to save Peach from Bowser?

On the flip side, we have games where hidden societies and secret groups apparently have enough troops and firepower to rival a small country, and yet do nothing but try and fail to stop the player.

For trying to take place in a realistic setting, the act of having the player mow down waves of enemies and have them spawn out of nowhere distracts from the experience. You would think that after one person just killed 100 of your friends that you wouldn’t be so eager to rush straight at them firing a gun.

Enemy design has not made too many radical reinventions over the years. One reason is that it is simply hard to develop complex AIs on par with a human player, whether that is in a strategy game, FPS or even just a platformer.

The other reason plays into the power fantasy that we see in AAA developed games. The player is supposed to be the #1 bad-ass and it’s easy to be that if the enemies stand around like targets to get mowed down. 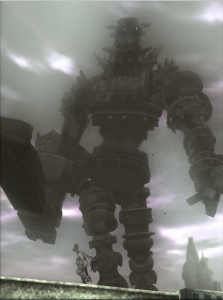 Shadow of the Colossus’s unique enemy design led to a game that was more about quality fights, over quantity.

This by the way was used to great effect in Spec Ops: The Line, where the designers used almost every military shooter trick in the book to make a point. Discussing it further would take us into spoiler territory so I’ll leave it at that.

Quantity over quality seems to be the name of the game when it comes to enemy design. But that clashes with the idea that the player is fighting in a realistic setting. Personally I would like to see more games that are built around fighting fewer, more dangerous enemies, think of something like Shadow of the Colossus style.

Imagine playing a game where you have take out a dangerous group of villains and that there are only ten enemies, not ten per level but ten total. Each enemy would be 100% unique requiring completely different tactics to take out.

While that sounds like a great idea one other issue that has to be mention is game length. A game with only ten enemies to fight has a limited amount of play time no matter how you slice it. With games featuring hundreds of non-descript enemies, it’s easy to just keep creating levels and pad out the game.

Arguably, having non-descript enemies can be seen as a necessary evil in most cases. However, the decision to make the player fight the same basic enemy just leads to combat being generic. Hopefully with the next generation of games, we can start seeing games where the AI has a few more tricks up their sleeve outside of hiding behind cover, or running straight at the player.

Up Next: Hide and Seek