Solium Infernum part 6: Are you not entertained?!

Well I’m pissed, someone who shall remain nameless because I don’t know who did it, played an event that took away 6 of my tribute cards which made me lose the Ichor that I finally managed to obtained. However it is finally time to vent some steam: 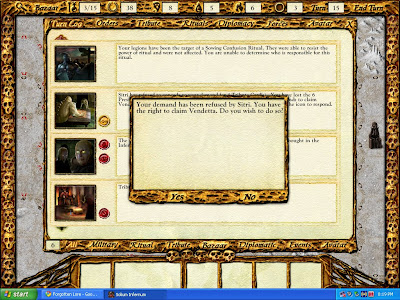 Skip ahead a few turns and once again another event drains me of my tribute, but that isn’t important right now. I’ve chosen as my vendetta single champion combat meaning its praetor V praetor. What is interesting about this is that it is a way for a non combat oriented archfiend to still strike a blow against his neighbors, by hiding a bad ass praetor waiting for a challenge like this. You don’t even need to have a praetor in your army to issue the challenge as both you and your enemy have 2 turns to get someone signed up. Now entering the ring is my pick: 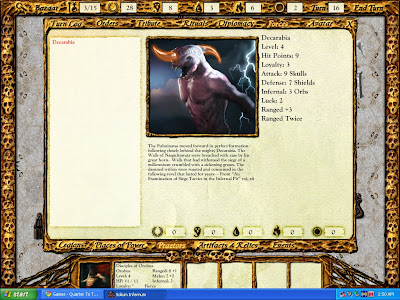 Now let’s talk about the attributes relating to praetors besides the bonuses they provide when attached to legions they have their own unique stats that are judged in single combat. First off are hit points which is self explanatory, when they are all gone the challenge is over. Attack, Defense and Infernal are the important ones, they are measured by skulls, shields, and orbs respectively. Skulls and shields are used to enhance the combat moves you pick for your praetor; orbs are used for special moves. Luck works by increasing your attack and defense stats for that round of combat based on a dice roll done behind the scenes. For each round of combat you must choose a combat move for your praetor to use; by collecting manuscripts you can teach exotic combat moves that have a variety of affects but all praetors have the following moves:

Melee Attack: This move allows the praetor to attack the opponent, the player can enhance this by placing 1 to 5 skulls from their pool to enhance this. Luck plays a factor and a roll based on the luck stat will determine a bonus given to the attack.

Melee Defense This move allows the praetor to block an attack. This one can be enhanced by using 1 to 5 shields from their pool; luck will also enhance this move as well.

Guarded Attack: A cross between the previous two, this moves allows the praetor to attack and defend in the same move. The player can assign 1 to 4 skulls and 1 to 4 shields to this move.

Infernal Burst: This move is the special one, you must spend 3 orbs to use this move each time and this one cannot be blocked by luck or shields normally, it will do between 1 and 6 points of damage to the opponent.

And my first attempt at combat ends in…. nothing, turns out he did not have a praetor and I won by default. Meanwhile I don’t know what the hell this thing is but I must have it: 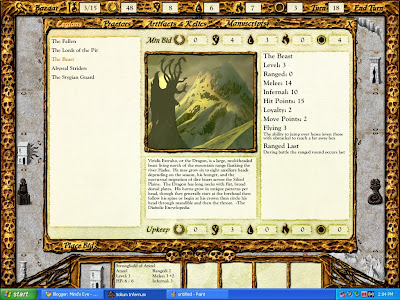 After many, many, many, many turns later I finally got a single champion fight so I can now show you how things went. Since I uploaded that first pic my praetor hit the gym so to speak with thanks from that event, you can see the differences in this battle breakdown picture: 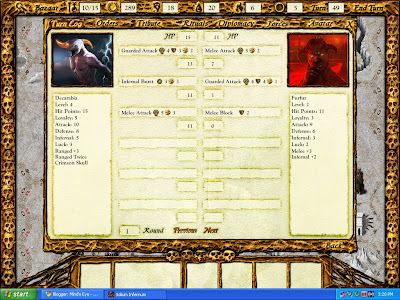 Round 2: I played an infernal burst using up 3 of my 5 orbs for the match. As I mentioned earlier infernal bursts cannot be defended against by normal moves nor does luck stop it, but it does enhanced it as you can see. I end up doing 6 unstoppable points of damage and losing 2 points of health (0 defense +3 luck – ( 4 attack + 1 luck), ending the round 11 to 1 in my favor.

Round 3: I went all out with a 5 skull melee attack enhanced by 3 luck, the enemy only uses a 2 defense melee block. To make things worse for him it seems that his luck roll gave him a 0, meaning he takes 6 points of damage (5 attack + 3 luck – 2 defense).

So that is single combat in a nutshell, thanks to that victory I was able to enhanced his stats a bit more, coming up in our next part I breakdown how my game is going.

P.S Also I did not managed to buy the Beast 🙁