My backlog of doom has been encroaching on my free time lately, but with a second PBEM of SI in the works I decided to hop back into my singleplayer game to see what is happening. 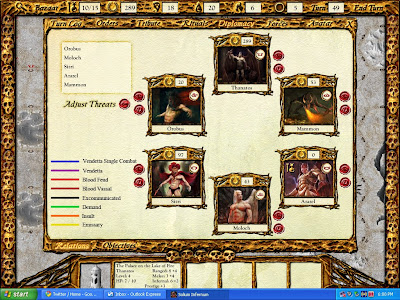 Right now I’m #1 by a long shot which also makes me the target of everyone else. Thanks to my bad ass servant legion which from what I heard after patch 1.05 will not happen so easily again, I’ve managed to keep the peace with just 2 legions. Everyone else on the other hand has a private army ready to knock on my door; I have to keep the peace long enough to secure hell. I’ve been targeted by a few archfiends who have been looting my tribute cards but with my high charisma I can easily recoup the lost. With all those resources I’m also improving my martial skill so that I can hopefully start a blood feud.

I want to stop things for a second and comment on the flavor text in SI, I love it. Every legion, item, and PoP has accompanying flavor text to go with it that sets the mood so well. I really wish the manuscripts had a bit more text to go with them but that is a small nitpick.

Ok back to the action, my plan now is to go full on bastard and tick off Mammon to the point that he will have to declare war against me. Meanwhile I’ve noticed that Moloch has assembled a huge force north west of my territory. I’ve also played an event that may excommunicate one of the AI allowing us to pick on him until death, unfortunately it didn’t happen.

We are nearing the end at this point, before I saved my game I was up to 13 of 15 tokens drawn. My servant is away fighting heaven right now which leaves just one legion guarding the homestead. I had a chance to draw an event which summons an angelic host to beat down everyone starting with the guy with the most prestige, considering it was me that would not have been a smart move. Chances are unless something crazy happens my next entry should be the last, I will also talk about secret objectives as I believe that is the last mechanic left to go over.