In time for Halloween, I wanted to write some horror design posts to go along with the upcoming podcast dedicated to horror games. For this post series, we’re going to examine how three of our senses can be compared to the elements of horror design. And spoiler alert: Taste and smell are not going to be talked about for obvious reasons.

The biggest distinction between a horror movie and a video game comes down to the pacing set by the medium. A movie unfolds the same way every time and was written and directed to run for a specific running time. Video games are a different story, they’re meant to be played for a varied time which is usually far longer than a horror movie.

This creates a major clash between horror and game design by the fact that the more you know about a situation or the rules, the less scary it becomes. When people talk about their favorite horror movies, they usually talk about the first one in a series or a standalone movie. And the reason is simple: It’s unknown.

You can’t detail a character or monster’s entire life in a two hour running time and instead have to focus on the situation at hand. Meaning, that the audience is just as confused as to what’s going on as the main characters are who probably being killed.

But once the audience knows how things work, the movie becomes less about horror and more of a dark comedy as you’re now following things from the antagonist’s point of view.

What’s worse is that the longer you watch a specific monster or series for, the more routine it becomes and you become acclimated to the situation. John Carpenter’s remake of The Thing is one of my favorite horror movies, but even I would become bored by it if it went on for six more hours. Simply put, there is only so much horror you can squeeze out of one situation.

And as AAA games continue to grow, this is why we’ve seen the Indie market pick up where major developers dropped the ball on terror.

When it comes to horror pacing, you can’t stretch out the experience without upsetting the horror of the game. During our upcoming cast, we each talked about our favorite horror moments in video games and podcast guest Chris Gardiner brought up an interesting point: Many of our favorite moments either took place in games when we weren’t expecting them or were just single sections lasting from 30 minutes to an hour and a half.

The reason goes back to horror movie pacing and within that short time frame, you’re not given enough time to figure out what’s going on. All you can do is go with it and experience it much like the main character who is scared out of their mind.

But AAA development is running into the same problem when horror movies went mainstream: People wanted more of the same series and the quality dropped. You simply can’t sustain the same kind of horror over multiple iterations or hours. 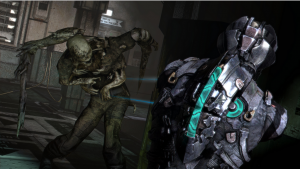 Dead Space started out as mostly a horror title, but became more action oriented as the series went on.

Both Resident Evil and Dead Space as franchises are perfect examples of the problem with sustaining horror across multiple games. With both, the designers tried to escalate things such as the numerous alphabetical viruses in Resident Evil and turning Isaac Clark into a bad ass necromorph hunter.

But as time went on, both series moved more towards action based instead of horror, both from a design point of view and simply because you were always fighting the same enemies.

This is why Indie games or quick sections are usually the best places to find horror as you can make an experience last however long you want. And you are free to only make one game and not have to turn it into a complete series. And just like a horror movie, you can assault someone with a variety of insane creatures and situations and have it end before the player gets acclimated to the surroundings.

As when the game gets long enough that you have to start explaining things to the player, the magic is lost. Coming up tomorrow, we’ll talk about touch or the feel of the gameplay and how it can be used to generate terror.

THOUGHTS ON
“The Three Senses of Horror: Sight”