Action Henk developed by Rage Squid goes in a different direction with the speed run genre compared to the highly regarded Trials series. Where Trials focused on technical play which was both satisfying and demanding, Action Henk goes for more of a platforming angle and delvers on the easy to learn, difficult to master mantra.

(This spotlight is based on version 9, screenshots and impressions may not match the current version. The developers are looking to wrap up development in early 2015.)

The plot is that you play as Action Henk — A washed up action figure who used to be one of the best. To recapture his youth and popularity, the toy decides to show what he can do on a series of courses of escalating difficulty.

The controls are pretty simple, you can run, jump and slide through the levels (with a grappling hook item that shows up later in.) But the twist is that the game relies heavily on the physics at play. Running up any kind of ramp or angle will slow you down while sliding down will give you an increase of speed. Add in wall jumping, crazy loops and more and things definitely get complicated.

Similar to Trials, getting through each of the levels isn’t the main goal but how well you do it. The developers for Action Henk have ghost images playing the game tied to the medal awards of bronze, silver, gold and rainbow (if you can get gold on a level.) These images will race you and act as a measurement of how well you are doing in each level. As a great touch, these images are also the keys to mastering the game as you can watch how the gold image does the level and emulate its advanced maneuvers and timing if you can.

The level design is well done as it forces you to quickly decide how to alter your momentum during play. Many levels feature short cuts and alternate paths that are vital to getting the best times. Each grouping of levels also has a “boss level” where you’ll race another toy through a more demanding course which will unlock that character for play if you can beat their time. 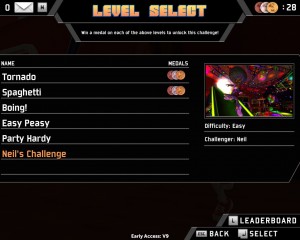 Progression is all about collecting medals which unlock stages, characters and costumes.

What makes Action Henk different from speed runners like Trials is the greater focus on platforming and mastering the game will require a lot of play and fine adjustments to your style.

Unfortunately my biggest problem with the game at the moment is how difficult true mastery of the game is to achieve.

Action Henk features a robust physics engine which governs over everything that you do in the game and is the key to going up in the medals and unlocking new stages. But the problem with this system is that it’s not really explained to the player how it all works and what kind of adjustments are needed on their part to improve.

With exception to the basics like sliding to increase speed on declines, the rest is left for the player to figure out but it’s not that intuitive at the moment. For instance I noticed multiple times where the ghost was getting a little extra speed or a little more wall run distance than I was and I had no idea how given the explanation of the mechanics. And the thing was that up until these little moments, we were going literally neck and neck with each other in terms of velocity (one time I was actually ahead) so it wasn’t like whoever was playing that ghost was moving faster than me. 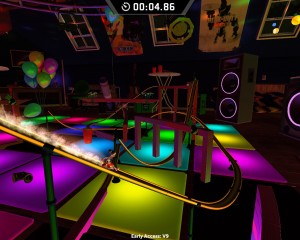 The levels feature a variety of obstacles and short cuts to challenge you to get the best times.

And then there are micro adjustments that the game completely doesn’t mention like what to do when moving through a loop, the correct velocity when it comes to wall running, do you slide when running on the ceiling to keep your momentum and so on.

It’s very hard to pick up on precise actions by the ghost as the ghosts are transparent and blend into the background.

Action Henk is a great example of taking a simple setup and elevating the mechanics and skill for novice and expert players alike. And with workshop integration and level editing will give fans a lot of interesting courses to play through. At this point the foundation of the game is set and the developers are looking to finish up the development with fine-tuning and refinements. Be sure to check out my podcast interview with one of the developers this Friday.