Conflicks is the latest game from Artifice Studios whose previous game Sangfroid I felt was underrated for its unique take on tower defense and strategy. This time around, the developers are going all out with a game that is unique for its story as it is for its gameplay, but things may be too outside the box (or henhouse) in this case.

The following spotlight is based on the Early Access version of Conflicks; screenshots and impressions may not match the current version. The developers have said that the singleplayer campaign is done and that they will spend 1-2 months working on the game before an official release)

The story of Conflicks may win the award for strangest plot of 2015; here it goes: In the 16th century, Leonardo Da Vinci discovers that hen eggs can produce a substance called metamatter that allows anyone to shape reality as they see fit. From there, the world becomes a massive hen house as kings lead space armies powered by metamatter and chickens across the Universe. Years later, the Universe is divided into four factions — Greater-Britain, Celestial Empire, Sacred Alliance and the Sublime Gate. But the hens of the Universe are becoming tired of being held in internal servitude and decide to rise up and become sentient to take over the Universe and gain their freedom.

Yes, everything I just said is a part of the story of Conflicks. It looks like the developers took my critique of Sangfroid to heart, as Conflicks features a very unique aesthetic of still images similar to the style seen in Monty Python that help tell the strange story. The game comes with a singleplayer campaign and multiplayer (more on that in a minute.) 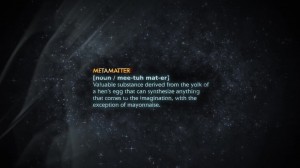 Gameplay is where Conflicks takes another strange turn, with a combination of real time strategy and physics based flicking. The objective of the game is to crush your enemy’s capital ship using your own array of ships.

Ships cost metamatter which can be harvested by planets that you chicken colonize and the game deals with small unit counts because of it. You’ll recover metamatter over time and get a bigger supply and faster recharge via harvesting planets.

Instead of controlling ships as you would in a strategy game, all ships are moved and controlled via flicking them in a direction. The game shows you the general velocity of where the ship will end up as you try to aim and pull back the correct length. Once a ship moves, they will require a few seconds to recharge and they will attack any nearby ships automatically. Ships also have Special abilities that can work the same way, with you selecting the command then flicking in a direction to activate some of them while others are just a button press.

There is also strategy in how and where you move your ships to. Wormholes and resupply points will allow you to move your ships more than they would from a single move and ships can be flung into enemies to push them away, or into the gravitational pull of a planet to destroy them. The game’s four factions each share the same ship types, but each faction has a different special power associated to it; Greater Britain’s corvettes get a shield to protect it from attacks and ram damage for example.

Currently the game comes with online multiplayer (friendly and competitive) and the singleplayer campaign that explores this crazy story further. While the story mode doesn’t have voiced cutscenes, the beautiful still images do help sell a story about sentient chickens and 17th century rulers battling in space.

Conflicks is definitely a game built on uniqueness, but my problem is that things may be too unique for the strategy market.

As I mentioned, Conflicks features a flick based system for all unit commands and controls, which is a completely different way of playing a strategy game. While uniqueness may sell a game, it can sometimes come back to bite the developer when things are too far outside the norm. 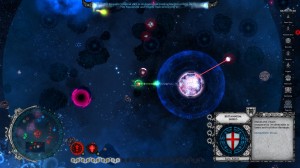 The flick based control setup is unique, but very cumbersome compared to traditional control methods

In a traditional strategy game, the use of a keyboard and mouse for instant commands allows someone to quickly and effortlessly move between the macro layer of managing resources and unit production, and the micro layer of ordering individual units around.

In Conflicks, because you have to manually control each ship via flicking, it forces you to focus more of your attention on the micro layer and makes it harder to control the entire battle.

During my plays, I became so focused on making sure I moved my ships right, I didn’t notice the enemy moving ships to attack. In multiplayer against other humans this isn’t a problem, but when playing the campaign, you are fighting an enemy who can control everything at once.

Another issue is that the game could really use some more notifications, such as alerts when your ships are under attack, when a ship can be moved again and so on. These notifications would help give the player vital information about what’s going on, which is very important due to the focus on the micro layer.

All in all, I’m not sure if Conflicks’ unique approach to strategy play is going to attract competitive fans to it. The developers are going to be adding rank matchmaking later in early access, but I don’t know if this game has the legs to build up a community. Speaking of multiplayer and competitive play, the developers have made it so that completing achievements will unlock passive benefits for multiplayer. Having upgrades locked to achievements is a bold move and I’m not sure how the multiplayer community will take it when the game gets the rest of its multiplayer functionality.

Conflicks is a game that quite frankly I’m not sure how I feel about it. The design and aesthetics are unique and give the game a great flavor, but the uniqueness of design comes in the form of a very explicit way to play that feels awkward when compared to the traditional strategy game design. 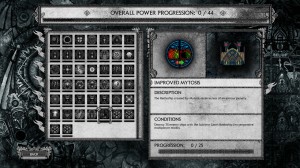 Make sure to watch my spotlight video I have up on the game to see it in action and to decide for yourself.

I really hope that the game does well as you can tell that the developers are putting everything into this game, but I’m just not sure how the general consumer are going to react when sentient chicken people having spaceship battles is the least perplexing part of the game.