Crypt of the Necrodancer is proof that I haven’t seen everything yet: Combining rhythm based controls with a hardcore rogue-like. Forcing me to deal with my utter tone deafness in a life or death setting, it shows a lot of promise and content despite just being released on Early Access.

This spotlight is based on the Early Access version of Crypt of the Necrodancer. Screenshots and impressions here may not match the release version or subsequent versions. The developers are hoping to finish the game by the end of the year.

Crypt of the Necrodancer takes your usual rogue-like design and combines it with keeping to the beat. At the bottom of the screen, beats will converge on the center of the screen where a heart beats, every time the beats reach the heart you can make one action in the dungeon and so do all the enemies.

Miss the beat and you’ll have to wait for the next pairing before you can make an action while the enemies get a free turn. You attack simply by running into enemies or if you’re using a specialty weapon, when you get within attack range.

Because a traditional rogue-like uses an “I go, you go” system, Crypt of the Necrodancer mixes things up by letting the enemies react outside of the player. This also plays into the fact that every enemy type has a different movement and attack strategy that you have to figure out. 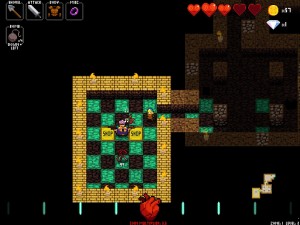 Even the shopkeepers get into the groove.

Skeletons do a small dance before moving and slimes have different patrol patterns based on their color for example. This adds to the challenge by forcing you to not only keep track of the beat, but how the enemies respond.

To make things easier for you and to add some Meta progression, the game’s lobby also acts as an unlock system.

As you play through each of the game’s zones/worlds, you’ll find diamonds that can be used at the game’s lobby to unlock upgrades. The upgrades can either unlock new items that can appear in the dungeon or provide you with stat upgrades like more health or increase gold per kill.

You can only spend the diamonds that you found on the previous run one time as the diamond counter resets when you reenter the dungeon. This provides an incentive to play well without allowing someone to game the system and just keep storing diamonds for the expensive upgrades.

With a hardcore mode, local co-op, additional characters and even a daily challenge mode similar to Spelunky, Crypt of the Necrodancer has a lot of value to it.  However my main problem with the game comes from its main feature.

Crypt of the Necrodancer is a marriage between the excitement of a rhythm game with the methodical pace of a rogue-like. However these two elements don’t necessarily mesh well. As a rogue-like, you want to take your time and make sound decisions, but you can’t do that when everything moves to the beat.

This clash is all the more apparent if you play the game in “bard mode” which removes the beat timing while the game just plays like a straight rogue-like. Not only is the game more responsive, but it plays faster thanks to not having to deal with the beat.

Speaking of the beat, again I’m not sure if this is due to my tone deafness, but there were time where it didn’t seem like the music was lining up to the beat indicator. Now you can run a beat sync to make sure that the screen and music are matching up, but I don’t know if this is a problem from that.

Also from a UI perspective, I think I would have liked the beat indicator to be a bit higher on the screen.As your eyes are drawn to the top of the screen where most of the action is and it can be hard to focus on the beats while trying to watch what’s going on. 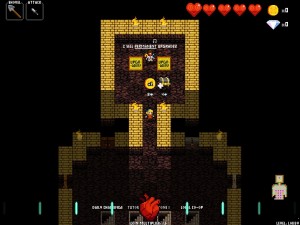 Unlocking permanent upgrades via diamonds help to keep you motivated.

The issue is that I’m hard-pressed to say if the music aspect of the game is really warranted thanks to the bard mode.

Right now all the beat system does is push you forward and punish you for messing up. Maybe if you could get additional turns or do more damage for following the beat perfectly would help.

Adding to difficulty is that the developers don’t keep to a standardized formula for enemy tells. Some enemies will actually show you through animation when they’re about to attack while others don’t. This makes it annoying to try and keep track of movement all while making sure that you are timing your presses correctly. Of course there is the possibility that this is because not all the animations are in the game yet.

One final nitpick would be that the game makes use of a material quality system to define weapon damage like iron sword, platinum sword etc. It would have been useful to have some numerical way to tell what weapon is better.

Crypt of the Necrodancer provides a fresh take on rogue-like design backed up with a great soundtrack and a lot of great additional features to add value. Even in early access, the game feels very close to being finished and it will be interesting to see how the devs wrap it up and possibly continue to support it.

Tags: Crypt of the necrodancer, rhythm games, rogue like