Factorio has been in development for several years now and recently made the move to Steam and Early Access. While the game may look like a survival title, this is all about logistics and should be a must play for city builder fans.

Factorio is currently in Early Access. Screenshots and impressions may not match the current version. The current timeline is possibly by the end of 2016 for a 1.0 release.

The story of the game is that you have crashed landed on an alien world and your only option is to make due and survive while dealing with dangerous aliens.

With that said, you’re not going to be looking for food or crafting shelter; instead, it’s all about setting up production lines and factories to build what you need. Where Factorio goes above and beyond is with the level of detail and optimization that the player has control over.

Sure, you could stand there and mine ore with a pick axe, but you could set up an automatic driller to do it for you. But wait, why run back and forth to the driller when you can set up a conveyor belt to transport it to a chest for easy pick up. And yet there’s more; you could set up robotic arms to transfer goods and fuel to furnaces for immediate smelting and then move said goods somewhere else. While the game is all about automation, the player still needs to understand how the world works and set up the production chains to get it done. 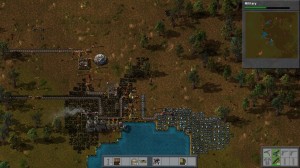 A typical play starts small, but you’ll soon be creating production lines all across the land

The joy of playing Factorio is definitely for people who love production chains and optimization; city builder fans in particular will get a kick out of this. As the game goes on, you can replace your coal burning furnaces, set up electrical systems, create automatic defenses, research new items and basically turn your land into a giant factory/base.

The progression model is both player-based, as the player learns how to set up chains and refine them, and crafting higher tier components and gear to increase your production.

Factorio is another great counter example to why Anno 2205 just didn’t work for me. The problem with Anno 2205 was that there was no greater depth or gameplay to putting buildings down and their purpose. In Factorio, the developers give you a bunch of tools and then leave it up to you to figure out how best to use them for your needs.

From a design perspective, Factorio has its core fully developed, and it just needs some refinement (no pun intended) to make it amazing.

For fans of city builders and optimization, Factorio is a fantastic game with a great design. At this point, the only problems I have with the game are about it being rough around the edges. The UI could use some more work to make it easier to find important information. There are a lot of important hotkeys hidden within the UI and the tips screen that should be given more coverage.

This also means that the game doesn’t do a good enough job in my opinion of explaining the “why” to the player when it comes to doing tasks or setting up chains. As a fan of city builders and optimizing design, it was easy enough for me to follow along and figure out, but new players may struggle with the thought process behind the automation.

At the moment, the game doesn’t really have a story mode or a set of goals to go after, but a series of campaigns with more along the way from the developers and fan created. The real meat of the game is the sandbox mode, where you’ll get a randomly generated piece of land to explore and work off of. From looking at the items and design present, there is one end-game goal which is to build and launch a rocket. 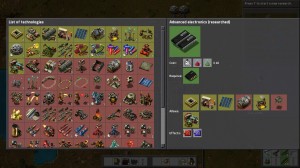 Factorio reminds me of Prison Architect and how the game is really set up as a collection of systems and a journey, not something with a destination. Once you’ve finished the free game mode once, there just isn’t any real reason to come back to playing Factorio; just like Prison Architect.

Still, it’s important to remember that the game has been in development for over four years and I’m sure the developers have something up their sleeves.

For now, Factorio is definitely on my must watch list and I can’t wait to see how the game finishes up. For more on the game, you can check out a video spotlight and extended play session I did on it.