Nuclear Throne is the latest game from Vlambeer, a developer whose previous titles have all kept to a retro theme. This time the developers are combining retro shooting with the rogue-like genre and while the game is still in early access, it is shaping up to be a chaotic good time.

(The following spotlight is based on update #58. screenshots and impressions here may not match the current version of the game. The developers have committed to weekly updates with no concrete date for when the game is done.)

The story of Nuclear Throne is that it’s the far distant future in a post apocalyptic world where mutants are all vying to be the best and claim the nuclear throne. At the start you’ll choose a mutant to play as with more unlocked as you go. Each mutant has different starting attributes along with a special power that is activated by right clicking.

Similar to The Binding of Isaac, Nuclear Throne features procedurally generated levels split into different worlds. The object is to clear the level of all enemies to make the exit portal open; at certain levels you’ll have to fight a boss enemy to move to the next world. The worlds themselves feature different enemies and obstacles to deal with but the order that you’ll visit each world is set each time.

Gameplay is all about shooting enemies and trying not to get shot back. You start the game with one weapon and can hold a max of two. Guns are split between different ammo types like bullets, bolts, energy, etc. This is important as you want to have two different ammo type weapons so you are less likely to run out of ammo.

Killed enemies drop radioactive waste that acts as experience which will allow you to level up. Leveling up gives you the choice of mutations to add to your character that can have powerful side effects such as increased speed, killed enemies may restore health, weaken enemies and so on. Each mutant that you can play as also has mutations exclusive to them to give them more options and personality. The mutations that are available on level up are random each time to further add to the replayability. 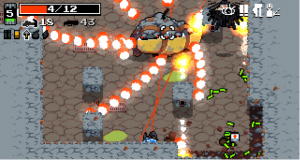 The game definitely can start to feel like a twitch shooter when things get chaotic.

Nuclear Throne is a very frantic game as you don’t have a lot of health and enemies hit hard. There are no second lives and if you run out of health, you’ll be sent back to the main menu.

What keeps the game going is the procedurally generated levels that make sure that you’re not just dealing with the same things every time. Hidden areas and a huge catalog of weapons to find also give you further reason to explore the wasteland.

While Nuclear Throne has a lot going for it and the impressive support from the developers, it’s still missing that certain spark that makes titles like FTL and Binding of Isaac so replayable.

Nuclear Throne’s biggest problem at the moment is that despite the procedurally generated levels, the experience is not different enough between plays to make each run stand out. While the level designs themselves are generated fresh, what you’re going to be doing in each level doesn’t change.

Right now I know exactly what to expect in terms of enemy designs, obstacles and even boss enemies and that makes the levels feel too linear despite their generation during game. Unlike The Binding of Isaac, Nuclear Throne doesn’t have as many options at the moment to customize your character. There are no items that dramatically change the play experience like in The Binding of Isaac and the playthroughs started to feel very samey.

While you can argue that the mutations can be compared to the items in The Binding of Isaac, they lack the game changing impact that something like Brimstone or explosive shots has on the player’s experience in Isaac.

And speaking of Isaac, one area where it beats Nuclear Throne at is providing variety built into the levels. Once you start unlocking content in Isaac, the levels themselves, bosses and rewards change and made each new run different and grew the experience overtime. Nuclear Throne however doesn’t have that varied level design as the procedurally added elements aren’t enough to make one run of the game stand out from another. 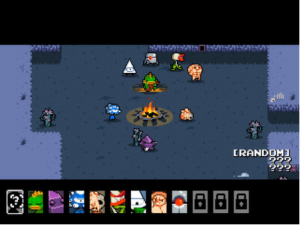 The different characters are both a form of progression and provide variety thanks to their different upgrades and abilities.

What Nuclear Throne does have going for it is the difficulty which will test your twitch shooting skills and things can get chaotic.

It is very easy to get killed and many enemies will attack you off screen along with obstacles like explosions that can kill you in one shot if you’re not careful.

Melee is absurdly overpowered for the enemies who with rare exception can move very quickly and just have to come in contact with you to do massive damage. Most of my runs have ended not due to bullet death but due to an enemy charging me without warning and killing me before I could get my shot off.

The developer’s commitment to Nuclear Throne and their community is astounding. As mentioned, they have been releasing updates to the game weekly and have been doing live streams twice a week. In fact, they recently gave out free copies of the game to everyone who had already owned it because they wanted more fresh eyes on it to make sure that the game turns out well.

Nuclear Throne has a great foundation and it just needs that little bit more of fine tuning for it to be placed next to titles like The Binding of Isaac as great examples of action and rogue-like design. For more about Nuclear Throne you can watch my recent live stream where I managed to beat the game with one of the best runs I ever had.