One of my favorite indie studios is Cryptic Comet, headed by Vic Davis, the studio has put out several mechanic rich strategy titles in the last few years. His latest title: Occult Chronicles is now available for beta buy-in and I had a chance to try it out.

Occult Chronicles is a rogue-like adventure game where you are a member of ODD: the Occult Defense Directorate, an organization designed to battle the supernatural and alien threats and protect our reality.

Similar to Cryptic Comet’s previous game: Solium Infernum, you’ll begin by creating an agent and define their attributes, background and starting bonus. This is a huge deal as you only have so many points to use and not enough to become good at everything.

Your four main stats: Sword, Cup, Wand, and Pentacle are from tarot cards and represent different attributes that will be factored during challenges (more on them in a minute.)

During this time you’ll also choose from one of the available stories and then find yourself alone in a decrepit, randomly generated mansion.

The objective is to stop whatever evil plan that is going on in the mansion and make it out alive… and sane. 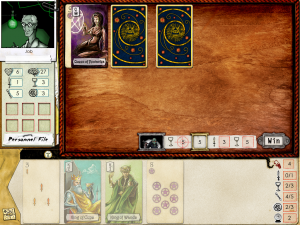 The card matching mini-game will determine your fate in the mansion.

The mansion is made up of a main floor, second floor, and attic along with three sub areas where the strongest threats await.

If you rush straight to the sub areas, you’re going to get yourself killed very quickly. Instead you want to explore the mansion for items and upgrades to arm yourself.

Also hidden in the mansion are clues that will give you additional bonuses for the final challenge and can be the trump card you need to win.

As you’ll explore you run into all sorts of creatures and events: from dealing with ghosts, to getting into a game with Death and this is when your stats come into play. Challenges are grouped into various types based on the event presented, with each type having several ways for you to succeed.

While battling a ghost you may want to use your psychic will-power to force it to find peace and leave our reality, or you could use your magic to fight it off.

Every challenge in the game takes the form of a card matching game. You’ll flip over cards on a table, or as they are called here: “tricks” that range from Ace to King. At the bottom of the screen is your hand that is made up of the same range of cards. 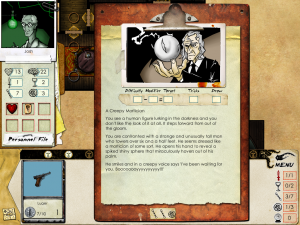 Challenges come in all forms and possibly familiar horror situations.

If you flip over a trick that is the same suit as one of your cards, you’ll have to place it on the trick.

If your card is either equal to or higher than the trick, you’ll earn points and if it’s not you get nothing.

After using up either all the tricks on the table or your cards, you must meet the point threshold for the challenge to win.

Winning a challenge will allow you to choose to flip over cards from a ten face-down reward group that can either restore your health or sanity, or give you upgrades. Fail the challenge and you must decide what punishment cards to flip over. These cards can afflict you with a weakness, drain your resources or outright kill you.

Now this is where things get interesting, the point target, # of tricks on the table and # of cards in your hand are determined by what attributes are being used in the challenge and what your rating is for each. You can also find magic spells or items that can be used to change the cards or affect the difficulty of specific challenge types.

While all this is going on, after a certain amount of time has gone by, the story will move forward and the bad guys will make progress with their plans. Every story has 12 plot tokens that represent the evil plan coming to fruition. 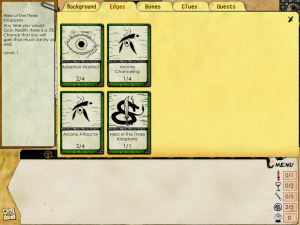 Edges represent passive bonuses that can help stack the odds in your favor.

Not only that but the current token will institute a game changing effect until the next token has been drawn.

If you haven’t beaten the final challenge by the time the 12th token is drawn, then the world ends and you fail.

As you can tell, not your typical adventure or rogue-like game; the randomized events and items give the game a lot of replayability. The game comes with various difficulty settings along with being able to play on permadeath or casual mode.

As with Solium Infernum I like the lore around the setting and the mechanics present an interesting game. For now there are a few issues with the game that have to be brought up.

As mentioned, Occult Chronicles is in beta and the game is a bit rough around the edges. The UI isn’t that accessible and could do with more shortcuts and indicators.  Difficulty is a bit subjective at the moment, since the challenges you run into determine what stats are important, your game could be very easy, or very hard based on the randomization at work.

This is of course par for the rogue-like genre, but the game does force you to make very important choices from the beginning and new players may get frustrated by how easy it is to screw things up. I highly suggest you read the manual before playing, as the rules are explained there in more detail.

I have confidence that Vic will get things straighten out before the game is released. Buying the game now will get you into the beta and save $5 off the price compared to when it is eventually released. Finally, make sure to come back as I’m planning on writing a tutorial themed AAR series either further into the beta, or right around launch.