Overwatch is Blizzard’s first original new IP in a very long time. Coming from the cancelation of Titan, Overwatch’s design marks another attempt by Blizzard to enter the competitive multiplayer scene. While this may look like Team Fortress by way of Blizzard, there is a lot of smart design taken from MOBAs present.

(This spotlight is based on the free Overwatch weekend that Blizzard had. Screenshots and impressions may not match the current version. The game is currently due out on May 24.)

There is a story to Overwatch, but other than character bios and the opening scene, it’s not really important for you to know about it, which is one of my complaints that we’ll talk about later. To start with, the game looks amazing; both the characters themselves and the setting are stylized and fully realized. The cast of characters is one of the most diverse seen in a game: Featuring men, women, robots and more duking it out.

Gameplay in Overwatch feels like a combination of Team Fortress and MOBA design. The game is split between various modes with the main similarity is that there is usually something that is being attacked/moved that needs to be guarded. There is no story mode or campaign, but the matches between two teams of six. The cast of 21 characters is broken down into 4 categories: Offense, Defense, Tank and Support. 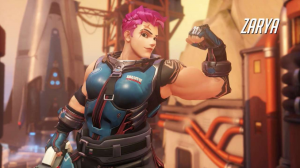 While there are four categories, the cast of characters couldn’t be further from each other in terms of appearance and utility, and represents the best that Overwatch has to offer.

While Overwatch is a FPS, a lot of the MOBA-styled design comes from the classes and characters. The basic idea is that you want to spread your team out among the four classes; with the ability to change heroes back at the spawning point.

This is very important, because certain characters and classes are designed to work better in different situations and team compositions. The idea of pick and counter-pick from MOBA games can be seen here and represents the expert side of Overwatch.

Each character comes with a basic attack, special abilities and an ultimate power that can be used when it’s done charging in a match. The variety of abilities and options really do give Overwatch a leg up compared to Team Fortress 2 and its cast of 9. What’s very interesting and a credit to Blizzard’s design is just how different a match can play out and be played thanks to this cast.

The different abilities and ultimates can easily fill the screen with crazy special effects as characters are jumping, dodging and dying. The MOBA design works here by allowing teams to work with different compositions and synergies.

The fact that each character behaves completely different is another high point. This isn’t like a traditional FPS where all the classes still have the same basic fundamentals, instead, you start to see the differences in how different characters move, shoot and react to the ever changing situation. Because each character is fundamentally different, it also makes it easier to find characters that you like within each class.

As you level up and complete achievements, you’ll unlock things like new skins, character taunt and poses and tags. No doubt, this will be an area that Blizzard will expand on after the game is released.

All and all, Overwatch is another example of Blizzard’s ability to really pick out the best parts of other genres and adopt them for their own. While there is a lot to like about Overwatch, my main concern is where Blizzard is going to go with it for the future.

Overwatch’s combination of MOBA and FPS design helps it stand out compared to other team-based shooters on the market, including Team Fortress 2, but it’s entering a market where Team Fortress 2 has spent almost a decade fine-tuning and expanding and Call of Duty has gotten its meta-game refined to near perfection. 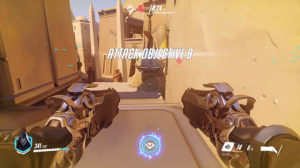 From a launch comparison, Overwatch easily beats Team Fortress 2 in terms of design, but it’s lacking in the one area that Valve has done to Team Fortress 2 to keep it relevant.

There is simply no in-game or Meta progression in Overwatch at this moment in time and what appears to be at launch too.

There is nothing in-game that impacts how characters play after your 10th, 50th or 1,000th match. In today’s market, many FPS and team-based games feature meta-progression in some way, shape or form, to make sure that players have some reason to keep coming back beyond just stats or a win/lost record.

Given how different the 21 characters are, I just can’t see how Blizzard could implement sidegrades in the same vein as Team Fortress 2. While there are fewer classes in Team Fortress 2, this has allowed Valve to branch them out with the items instead of needing to design and create more characters for the game. In Overwatch however, you change the abilities of any one character, and you completely change how they play in-game.

Because of this, I’m wondering just how well Overwatch will work out when the competitive and hardcore players pick it apart. Since each character plays the same, I’m sure that there will be optimized team compositions figured out after launch much in the same way that Hearthstone has had trouble dealing with flavor of the month decks. It remains to be seen if Blizzard will go the League of Legends route and design more heroes as time goes on.

One weird problem with Overwatch has to be the fact that it essentially is built on top of Blizzard’s failed MMO Titan. You can tell that there is a big story here between the situation and characters, but none of that is reference or even hinted at in-game outside of the opening cutscene. It would have helped to flesh out the world if there was something in game for the player to learn about the characters and help them with figuring out how they play.

It’s vital to learn the characters too, because some characters completely shut down others or fail in certain situations, and the finer points of using certain characters to counter or synergize with are not mentioned at all in-game. Granted, you’re going to learn this through play, but it can be very frustrating for new players to learn the ins and outs of the design; all the more so for newcomers joining the game after launch. 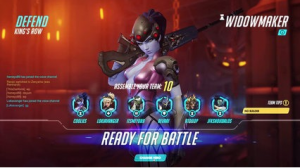 With a set group and limited modes, I do question Overwatch’s longevity compared to Team Fortress or Call of Duty

Finally, I’m concerned with how Blizzard intends on supporting Overwatch for the future.

The game is being released as a full retail game, meaning that the option of free to play microtransactions would not sit well with the fans. While they can easily create new maps and cosmetics, it’s going to be harder to continuing supporting the game in similar fashion of Hearthstone.

To its credit, the problems I have with Overwatch are less about the design of the game and more about the market it’s entering. If Overwatch can continue to grow, it does enough things different to make it stand out from games like Team Fortress 2 and Call of Duty; it’s also another example of how much a strong aesthetic and character design can help elevate a title.

While there isn’t enough here at the moment to get me to return come May 24th, I will be watching Overwatch to see how things develop. For more on Overwatch, you can watch my video spotlight taken during the free weekend.

If you enjoyed this post, please consider donating to the Game-Wisdom Patreon campaign. Your donations help to keep the site running and allow me to keep putting out great content.