The Tri-Color Brilliance of Alwa’s Awakening

Alwa’s Awakening was developed with the intent of releasing a classic 8-bit title in the modern era. Unlike other modern retro games, Alwa is entirely unique in its design without referencing other games. Standing apart, the game is a good example of how old school design can still work, but it’s not without some polish issues.

The story of the game is that the land of Alwa is under siege by an evil ruler called the Vicar. Reaching out, they have pulled a heroine from another world to come save the day. Alwa’s Awakening is different from games like Odallus and Shovel Knight that featured elevated examples of retro games. Here, the entire game was built from the ground up to be different from anything else.

Over the course of playing, you’ll unlock three different spells and their upgraded forms. Green squares that you can use for added height and rafting, blue bubbles for floating upwards, and a yellow lightning bolt for range attacks. You can also find orbs that can give you a slight edge at the boss fights if you find enough of them.

With only three points of health at the start, you’ll need to make use of save and warp rooms to make progress. While it may not look it, Alwa’s Awakening is going to make you work for a win.

The difficulty of Alwa’s Awakening is different from a title like Super Meat Boy. Instead of making numerous adjustments, your challenge is to figure out how to get across a room. There are many death traps and one hit kill spikes to avoid. 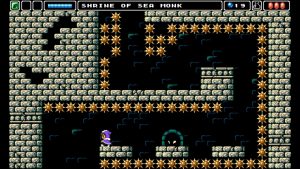 The platforming will test you in the later areas

Advanced play will require you to combine all your spells to solve them without any margin for error.

Besides the main quest, there are side areas to explore and hidden areas to find. The entire world is open from the start, but the game will tease you with areas that you can’t reach just yet.

While there are only the three spells in the game, the developers did a good job of level design. From start to finish, the difficulty curve of the levels continues to grow. By the end of the game, the final series of maps are like puzzle death traps to get around.

Alwa’s Awakening is a completely original retro game, but it does have some problems unique to it.

It’s important to have the right mindset going into Alwa’s Awakening in terms of its design. There aren’t any modern conveniences such as in Shovel Knight. Save rooms are spread out and it’s very easy to lose progress.

The warps help a bit, but there is a ton of backtracking in the game. Due to the open nature of the game space, it’s very easy to miss an important area and have to figure out where to go. During my first run of the game, the majority of the time was being lost due to missing an area.

A lot of the challenge in figuring out the game comes from a reliance on hidden areas. Many required items and solutions are hidden behind fake walls, floors and more. Just like in the old school days, there are no markings or indications to guide you. 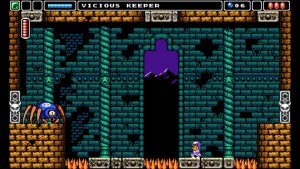 One strange problem would have to be size of the rooms. There is a lot of dead time walking from one end of a room to the other.

The point is that your character is so small and moves so slowly that it seems to take longer to move between the rooms. When you throw in the backtracking, this does become an annoyance.

Alwa’s Awakening is a great slice of retro game design. If you’re looking for a game straight out of the NES era in terms of design and challenge, definitely give this one a look.  For more on the game, you can watch my spotlight below

Have a suggestion for another game to look at? Let me know in the comments.

How Gacha is Monetized Progression

A Critical Thought on Iteration in Game Design