The Anno series has been a favorite of management fans for over seven years. Recently, the series moved from the colonial and seafaring era to the future while keeping the same basic foundation of logistics and effective management. Anno 2205 represents the second game during this future period and delivers an almost fresh start for the series, but one that may rub the dedicated fans the wrong way.

Bam, Zoom, Right to the Moon:

Anno 2205 continues the series’ move into the future and exploring a world far different than ours. The current situation is that there is a massive energy crisis that is threatening to collapse the cities of the world. A grand project has been started by the five most powerful corporations in the world to colonize the moon and set up energy plants to provide a near limitless supply of energy to the planet. You play as a corporation who is trying to get in on the project and must build successful colonies around the planet in order to have influence and resources to lead the project.

For people not familiar with the Anno series, here is a quick primer. The series is all about logistics and managing resources over an ever increasing amount of supplies, production chains and shipping of goods around multiple areas. There is combat, but it’s downplayed for a greater focus on economic and logistical management. The biggest change from previous Anno games and the one that may be the biggest shock is the difference in game progression.

In previous games, the Anno series was defined by two separate game modes. First, you had a campaign or series of missions that walked you through learning the basics of the mechanics with a light story to tie it all together. The campaign was the preamble for the main mode, which was a free play mode on randomly generated maps where the player could do whatever they want and go after the game’s many achievements. 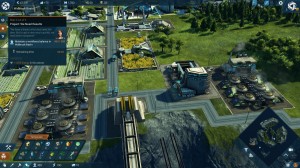 Despite the move to the future, the series’ focus on logistics and management remains mostly unchanged

In Anno 2205 however, there is only one mode which acts as a quasi grand campaign/meta game system.

You have a long term task of reaching the moon and providing energy to the world, this is done via completing a number of objectives that will take your corporation from humble beginnings to being the biggest on the planet.

At the start of the game, you’ll name your corporation and choose one of three starting locations which can provide a bonus. From there, your job will be to both grow your corporation by increasing the number of workers and completing the goals set by the lunar licensing company to earn the rights to mine the moon for the needed resources.

In previous games, you always had a secondary map or citizen type that gave you unique resources and products that could be traded to and from. Anno 2205 changes things further by giving you three biomes to build in: Temperate, Arctic and Lunar. Each biome changes what buildings you can build, citizens and their needs and environmental challenges; such as arctic houses must be built within the heat radius of your production buildings.

Your actual resources continue to grow or shrink in real-time as you play in any of the three biomes; giving the game an even grander feeling than before. As with previous games, you need to be very careful when setting up new colonies as you may not have the funding to support the period where the colony will be operating as a deficit. To help players out, the resource UI has been streamlined to easily show you how much of a resource you’re making and consuming, allowing you to quickly and effortlessly see the state of your economy.

As a form of Meta progression, your corporation will level up based on the number of workers you currently have; unlocking new buildings, achievements and bonuses for you to use. Combat, which was a polarizing system, has now been turned into its own separate thing. At times, you’ll get called to lead a military force on a separate map. 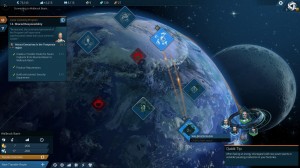 The world itself is now one big grand campaign, split into three different biomes

During these maps, you’ll use military units with special powers to help complete objectives. Military maps are optional and beating them will earn you bonus resources and will become harder and more rewarding the more you do.

The final overarching change to the gameplay is that now buildings can have attachments added to them.

These attachments cost credits and a secondary resource and can provide further enhancements such as lowering the cost to run or increase production. These modules take up space and further complicate the challenge of building out in a limited area.

Overall, the changes to Anno’s campaign structure to an open-world progression is a welcomed one; I like how it gives you the feel of running one big corporation instead of little missions. Having military now as an optional challenge was a smart move and it allows people to avoid it or utilize it as they see fit. Anno 2205’s early game is a lot more accessible compared to previous entries, but it’s the mid to late game where hardcore fans may have some issues.

The Anno series like any other management styled game is about the challenge and progression via the growth of the game; the more you play, the more challenges in the form of more things to manage and balls to juggle makes the game bigger overtime.

Anno 2205 doesn’t do that however, a lot of the micro scale tweaks that expert players could do to enhance their colonies are gone. Transportation now operates island wide which reduces the importance of transportation to an abstracted logistics stat. The ability to set up complex trading routes and plans is gone; these changes reduce the growth of the game’s mechanics and places all changes and rewards to the meta-game.

The option of equipping and unlocking building and unit changing modules is gone; in its place are generic modules for all structures that cost special resources to equip.

This makes Anno 2205 very similar in design and progression to Cities Skylines, which also used meta-game progression as the one and only form of growth in the game. This means that for the player, there aren’t any motivators to keep playing in terms of mechanics and growth, but simply meta-game related content. 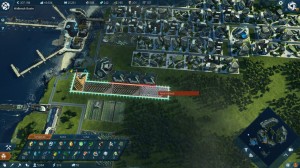 A lot of the more intricate mechanics have been stripped from the game, leaving a streamlined yet somewhat basic experience

Another issue is that the game doesn’t do a good job of explaining advanced mechanics and systems. One example would be the ability to see how much credits you’re getting from your people.

There were cases where I all of a sudden lost a lot of money and had no idea what happened. One thing that bothered me was not being able to see the repercussions of if I let a resource dip into the red and what that meant for the producer.

Once you understand how to properly grow and manage the production and supply of one resource, you’re going to do the same thing again and again for everything else. Granted, the new biomes do mix things up, but it’s just variations on a theme instead of brand new design.

Despite not enjoying the campaign structure of previous Anno games, it did at least manage to change things up with each mission to keep the player interesting. The lack of a random map generator is disappointing, as you can reach a limit of what you can do just like in Cities Skylines; once you’ve built one corporation to the end of what you’re willing to do, there is no reason to restart and go again.

There is already the promise of new content coming to enhance each of the biomes; hopefully, this will add more options and mechanics for the player to use.

Anno 2205 represents a top to bottom change in how the series is played and is the most accessible game yet. The new open-world campaign structure I feel fits the game better and allows you to see the scope of your growth over the many, many, hours that you’ll be playing. While the late game challenge and depth isn’t quite there, hopefully the upcoming content will fix that.

For more on Anno 2205, you can check out the video spotlight I put up on the YouTube channel.