Bayonetta was one of the newer games of the action genre after things got complicated with titles like Devil May Cry 3 and God Hand. Featuring a more streamlined approach with insane visuals, the game earned a fan base thanks to the always debatable main character — Bayonetta.

With #2, the series has moved and become exclusive to the Wii-U and while things are certainty as bombastic in the visual department, the gameplay is lacking volume.

The story of Bayonetta 2 is one of those plots that I’m not going to even touch, something about the end of the world and time travel and you really don’t need to know about it to play and beat up angels and demons.

The gameplay remains the same from the original with a focus on dodging as opposed to blocking. Bayonetta features a very basic combo tree with weapon combos standardized based on where you have them equipped. You can equip a weapon to her arms and her legs which will allow you to transition between the two during combos.

The heart of the defense system is the use of “witch time –” time a dodge at the right moment before impact and you’ll gain about 3 seconds of bullet time to attack with impunity. This also fills the magic gauge which when full will allow you to supe up her attacks and regain health.

Level design feels right at home from the first game with plenty of secret challenges, items and fights off the beaten path. One annoyance is that there are a lot of point of no returns that can throw you off and miss out on finding everything. Visually speaking, Bayonetta 2 has not loss anything moving from the 360/PS3 to the Wii-U and looks as amazing and over the top as the first game.  The main new feature for this one is online co-op which I did not try unfortunately.

Bayonetta 2 may seem like a winner when it comes to being bigger, but there is a severe downgrade in the challenges and enemy fights that ruins the game for me.

Quite frankly the enemy designs and tactics are some of the worse seen from the action genre. Every battle plays out the same way of relying entirely on witch time to take the advantage. This turns each encounter into one very long QTE without any real strategy or thought needed. Even the gold plated enemies who were immune to witch time have been removed this time around. The boss fights are easily the worse as well with the same basic pattern of wait for attack, dodge, witch time, repeat to win everything. 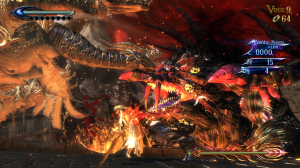 The actual combat tends to get drown out by the background and special effects going on.

In fact when I beat the final boss, I didn’t even realize that was the final fight until the ending cutscene. Making things worse is that the game breaks its own rules on alerting the player for enemy attacks.

In the original, every enemy’s attack would be telegraphed by a yellow shine to let you know about dodging. This time, there are plenty of arbitrary cases where enemies will shine a different light or no light at all which adds to the confusion; in some cases one enemy will use different tells.

The problem is that given the high number of particle effects and colors being thrown around, not having a standard alert tell makes it hard to actually see when attacks are coming your way. The camera also has a tendency to get stuck behind larger enemies making it impossible to see their attacks coming. But all this gets put into the enemy problems and just how generic all the enemies are, despite having vastly different character models they all can be taken out the same exact way.

A great counter example would be Ninja Gaiden Black which had some of the most demanding and challenging enemies in any action game. You were constantly being challenged to figure out their patterns and they would punish you for doing the same exact thing each time.

Another problem with Bayonetta 2 that exists from the first game is just how boring the weapons are. Because every weapon uses the same basic attack combos (with the combo chains tied to whether the weapon is attached to the hands or legs,) they all feel the same way. And because many of them are hidden in certain levels, there is a good chance that you’ll miss a chance to play with all of them further making the combat repetitive.

While DMC also went with having a standardized combo chain for all the weapons, each weapon was categorized by either angel or devil and also had unique quirks to them along with the aerial combat being more fluid. This is one of those areas where it’s hard to explain through words what I mean. You would need to play both Bayonetta and DMC in order to see the difference in feel between the various weapons.

What hurts Bayonetta 2 the most is that when I compare it to some of my favorite action games; it just falls behind all of them for various reasons which I’ll talk about further on an upcoming post series detailing my list. Witch time is just too much of a trump card that the game is built around that it renders any attempt at greater strategy or enemy design moot. 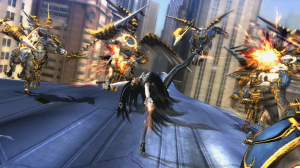 It doesn’t matter how big or dangerous the bosses are when simple pattern recognition will win the day.

And even with witch time active, it takes a long time to wear down each boss using the same combo mentioned already.

If there were more advanced mechanics that rewarded expertise, it wouldn’t be a problem but there aren’t. And before anyone complains that I was playing the game on the easy setting, I had it set to third climax (hard mode) for the entire length of play.

Bayonetta 2 may be one of the best action games released in 2014 but doesn’t do the action genre as a whole justice; it reminds me of Dark Souls 2 and how it is good for the genre but disappointing when put next to its predecessors. The underlining mechanics work but without greater challenge and advanced maneuvers, there just isn’t a lot here. If you’re in the market for a new action game, Bayonetta 2 fits the bill but don’t expect anything groundbreaking here.