Who would have thought that the bonus game from a kickstarter to do a metroidvania would turn out to be a surprise hit. The first Curse of the Moon was a modern retro throwback to the likes of Castlevania. With Curse of the Moon 2, the developers have aimed even higher for a game that is deeper than it looks.

In terms of story or canon, Curse of the Moon 2 is a bit of an oddity. While it does feature returning and new characters, there is not much connection between the first game or Ritual of the Night. We find demon hunter Zangetsu hunting down the appearance of a massive demon tower and joined by three new characters.

If you’ve played any Castlevania in the past, then Curse of the Moon 2 will feel like slipping on a familiar glove. You will be challenged with making committed jumps over death pits, fighting all manner of demons, and having some epic boss encounters.

The three new characters not only change things but also highlight a difference in level design.

Four of a Kind

Zangetsu is joined by Dominique, Robert, and Hachi the dog who pilots a steampunk mech (I’m not kidding). Dominique has the highest jump and can cast powerful spells, Robert has a gun that he can use to hit enemies from across the screen, and Hachi can turn invulnerable and can hover for a short period.

In the previous game, multiple routes through the levels required you to have the right character which would take you to a new area and possibly find some upgrades. While that is true here, the developers have taken things further in terms of empathizing the strengths of the characters. There are many sections that are purposely designed for a specific character. For example, areas where there are enemies guarding the jump over a death pit, Robert’s gun can make short work of them. 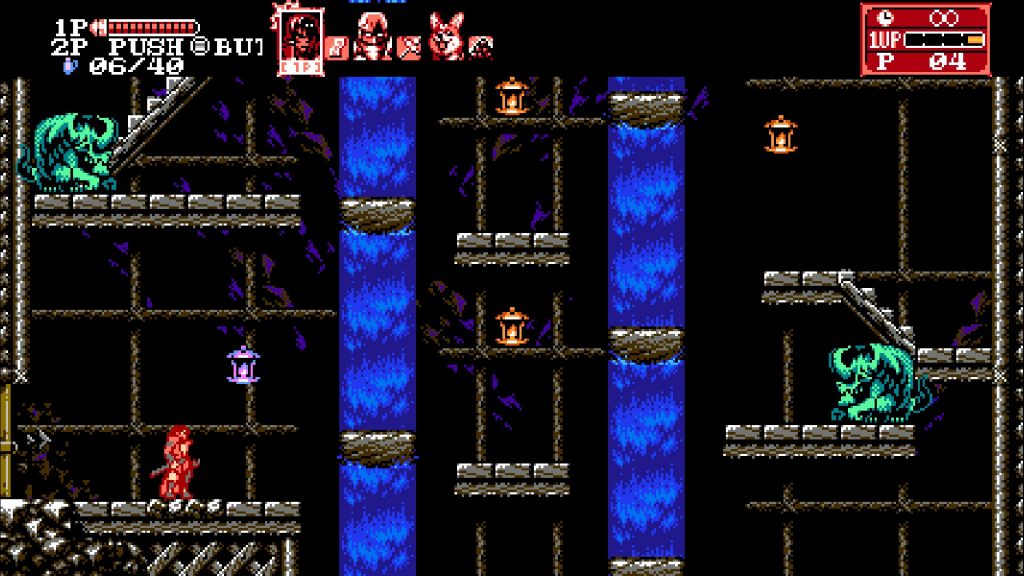 One level has rotating platforms and gears reminiscent of Castlevania, and Hachi’s ability to hover makes this a lot easier.

Different sub-weapons also serve as ways of minimizing the difficulty, and Curse of the Moon 2 gets hard. The back half of the game features many tricky sections and some of the most annoying bosses this side of the Grim Reaper fight in Castlevania 1.

As with the first game, the real challenge begins after the credits roll, and it only gets harder from there.

Fans of the first game should remember the multiple endings and variations of playing. With Curse of the Moon 2, this is taken further in the form of different episodes. Beating the game the first time unlocks a harder mode with different enemy patterns, routes, and a new final boss. Get through that (and with the “good ending”) and you unlock the game’s real finale.

For the final episode, some very familiar faces return to help and the game becomes a Mega Man-esque journey through the stages combining everyone’s special abilities in order to find upgrades to help you for the real final level.

There is certainly a lot of game with Curse of the Moon 2, and as a fan of Castlevania and the first one, I was definitely loving it. However, while there is so much here, the difficulty may be a turnoff for some.

Curse of the Moon 2  is a hard game beyond just the Castlevania trappings. As the game goes on, there are several noticeable difficulty spikes in the back half of the game. As with the first game, losing a character will allow you to continue on without them, and you only lose a life when the entire party is defeated. While that does help, it’s not as helpful as you would think. 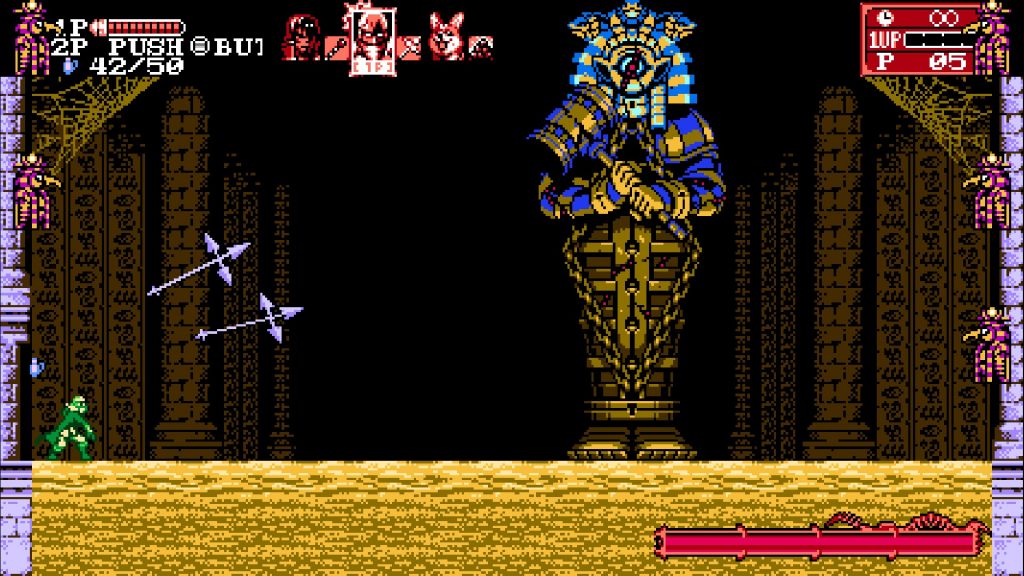 Expect this guy to give you a lot of trouble

Earlier I mentioned how the levels are clearly designed to take advantage of specific characters.

If you lose the best character for a level, things become a lot harder and easier to keep dying. While it is certainly doable to beat every boss with just a single character, that is a challenge that most players are not going to be able to do. The 7th stage boss was the hardest for me, and losing two or more characters simply meant I should lose the life and restart with a full team.

The game does feature a casual difficulty that removes knockback on hit (a Castlevania staple and popular way to die), but that doesn’t make the platforming any easier.

As a weird point in terms of gameplay, you can replay stages, but you cannot take any characters you unlocked after it in order to find powerups (with exception to the final episode). Every stage will have at least one permanent upgrade in it, and players starting out would need them more than the expert ones. There is a huge drop off rate of the people who played the game that managed to even beat the first episode, let alone the real finale.

Strange as it may sound, I think the Curse of the Moon series is better than Ritual of the Night. Everything about Curse of the Moon was on point to deliver a classic Castlevania design. — from the graphics, music, and refinement of the gameplay. With Ritual, it felt like the gameplay wasn’t firing on all cylinders, but that’s a topic for another time.

Curse of the Moon 2 is a Castlevania’s fan dream come true, but will be a nightmare for anyone who didn’t grow up with these games. The final episode is the most evolutionary I’ve seen on the classic Castlevania formula with exception to its growth to Metroidvania.

This is a great example of “modern retro” design, and if you don’t mind that retro difficulty, Curse of the Moon 2 is one of my favorite games this year.

How to Retain Players Through Game Design