Cosmochoria recently came out of early access and its gameplay is as wild as its story, involving a naked spaceman, aliens and a whole lot of planting. With a lot of interesting ideas floating around (no pun intended), it’s a great idea that has some trouble leaving orbit.

A Constant Gardener (And Shooter):

Cosmochoria begins with you stuck on a dead planet somewhere in a procedurally generated galaxy. Your mission is to cultivate the planets using seeds that let you grow plants that restore life to a planet, one plant at a time.

When the planet’s health is maxed out, the planet will come to life and you’ll receive a reward in the form of items or resources. From there, you can use your jetpack to float around the galaxy to another planet to repeat the process. In your way are aliens that either inhabit a planet or are floating around, which you’ll have to take out with your blaster. 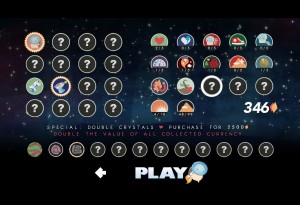 The longer you stay alive and restore planets, the more dangerous the game will become as aliens in greater number and size will show up to distract you from your quest.

Along the way you’ll meet people who will have quests for you to achieve, find items and fight nasty bosses across the galaxy without hopefully falling into the sun.

The basic gameplay of Cosmochoria is built around shooter and rogue-like design, but the game does offer some meta-game improvements to keep the player interested.

Crystals are currency in Cosmochoria and can be found off of dead enemies and sometimes in treasure chests. After a game is over, you can purchase a variety of upgrades at a shop screen which become permanent from that point on. These upgrades range from new weapons, stat increases and new abilities that will have a major impact over time. 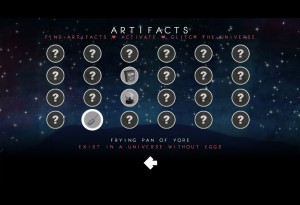 Artifacts, once discovered will become game modifiers that you can activate from the game menu

As you play through the game and fight the bosses, you’ll unlock stones that allow you to start further and further into a game which decreases the time before you fight harder enemies and bosses, allowing you to get more crystals.

Besides that, mini quests involving the random citizens of the cosmos will pop up and give you some other things to do while blasting around space.

All this is wrapped up in a very clean art style that lends to the relaxing exploration of the Universe. Cosmochoria does its best to combine twin stick shooting with rogue-like design, but the two genres aren’t meshing that well.

My first problem with Cosmochoria is that the pacing of the game feels off. On one hand, the game wants you to be flying around space and killing aliens, twin shooter style. But the mechanic of planting seeds and waiting for them to grow takes too long and isn’t involved enough.

That sounds like a weird complaint I know, but let me explain. Having to stop and plant seeds on every planet becomes very repetitive and doesn’t feel like a meaningful form of progression. The other part is that there is no real strategy to planting seeds; In terms of positioning, types of plants etc. If things were more involved, it would make the mechanic a more integral part of the gameplay.

Another issue is that the game really lacks the rogue-like progression and design that makes titles like The Binding of Isaac or FTL interesting. Progression is kept very limited to the shop and completing mini quests but this is the same problem that Rogue Legacy ran into. Any sense of growth happens after you do a run and not during the run itself. What happens is that the runs start to bleed together and the game becomes repetitive because of it.

One of the most disheartening parts of the game is when you finally revive a planet, get the treasure chest and discover that your reward is more seeds or bricks instead of something amazing. 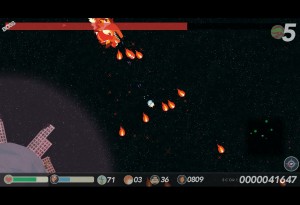 Boss fights add in some much needed enemy variety, I just with the rest of the encounters were as exciting

The Binding of Isaac is the perfect counter example to this feeling of repetitiveness. In it, every play is vastly different based on what items you find which changes your strategy during a run.

After the run, you’ll unlock new content that can appear which adds more variability to the game. So far in Cosmochoria, outside of weapon unlocks I have not found anything that massively changed how I approach a play of it.

Enemy variety from what I’ve seen was very low, with exception to the boss fights that do mix things up but only come after awhile of play.

Cosmochoria has some good ideas to it, but they are overshadowed by the lack of growth and awkward pacing. The universe is vast and mysterious; I just wish that there was more to do out there than just fly around naked planting seeds.