Death’s Gambit Shows the Limits of a 2D Souls-Like

Death’s Gambit is the latest in the attempt at taking the methodical gameplay of Dark Souls and put it in a 2D space. With gorgeous 16-bit art, the game pushes the Dark Souls design to its limits…and to its breaking point.

Death’s Gambit follows a soldier who is killed on the field of battle to find himself staring Death in the face. Death offers the man his life if he can remove a mysterious object that grants immortality to those who reach it. And as with these cases, standing in your way is all manner of enemies who would like to kill you…again.

The story is told through mysterious flashbacks that paint a picture for why the main character did what he did and the events that led to his death. As a great point, this is one of only a handful of games that acknowledges that the player is immortal. There is some humor in literally talking to Death about dying and how annoying this circumstance must be for him.

The basic formula of Death’s Gambit follows the souls-like design. Checkpoints around the map act as bonfires, you have phoenix feathers as a replacement for eastus, and shards instead of souls. It’s where the developers stray from the path that Death’s Gambit gets interesting, and frustrating.

Rising From the Ashes:

Death’s Gambit’s first twist is that the game does have a class-based design. Unlike Dark Souls where your class simply determines starting gear and stats, each class in Death’s Gambit comes with a unique perk and ability to recharge soul energy (that is used for special attacks). On top of that, beating bosses will give you talent points that you can use to unlock further perks on a universal skill tree. 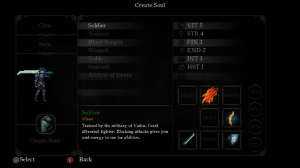 Improving attack power is a big deal here, as there are few weapon types and upgrading them only adds a few points to their max damage. This is where the game’s risk/reward comes into play with the healing system.

As mentioned, the game’s form of the eastus flask is feather plumes. Different plumes can be found that will heal varying amounts and/or do something else.

Regardless of what plume you equip, there is a limit of how many you can hold that can be upgraded. Dying will drop one of your feathers where you were killed — limiting how many times you can heal until you get it back or spend shards to recover it instantly.

However, there is something else you can do with your feathers. Instead of using them for healing, you can donate them to one of the death statues that act as checkpoints. Each feather you donate means one less time you can heal, but increases your overall damage potential by 10%. You can take the feathers back at the cost of losing your increased damage.

This creates an interesting dynamic with how bosses play out. Each boss has multiple phases to them (indicated by marks on their health bar). The stronger your attacks get obviously means that you’ll spend less time fighting them in their dangerous phases, but are you good enough to forgo healing in the process?

The boss variety is great and stands with the Souls series as an example of how to create distinctive challenging fights. To reward players who explore, each boss has two lore tombs hidden in their respective area that will allow you to do up to an additional 10% more damage if you can find them. On top of that, every boss can be fought multiple times for additional rewards at a higher difficulty.

These changes help to separate Death’s Gambit from the pack and along with the beautiful 16-bit graphic are great. With that said, this game unfortunately also shows how 2D limits the combat system.

Combat is a vital part of any Souls-Like, with the Souls series hitting that perfect balance of positioning, range, and pace to it. Death’s Gambit tries to emulate that, but it just can’t quite get there due to the 2D format.

There are several big points that take the game to the frustrating side. Enemies and the player themselves do not take up digital space; allowing characters to pass through their respective hitboxes. This creates an issue of enemies who will attack, go through your hitbox, and they immediately follow up with an attack on your back.

Compounding matters is just how stamina-starved you are throughout the game. Even until the very end, I always felt that I didn’t have enough stamina to properly dodge, block, or even attack enemies. This is further aggravated when you have to fight multiple enemies at the same time. Unlike the Souls series, expect plenty of times where you have to fight two or more opponents at once.

Trying to use special abilities, I found that it became very hard to properly hit enemies with it due to the time it took for the skill to go off, and the very likely possibility of my character going through the enemy’s hitbox while performing the attack.

Another issue has to do with the lack of animation frames during combat. In a 3D space, you are able to see the enemy wind-up and track the attack to properly dodge, block, or parry it. In Death’s Gambit, enemies attack so fast that there aren’t any frames of animation between being neutral (or the starting animation) and the attack. This leads to the player having to time any parrying based on figuring out the time it takes for the attack to show up.

Many bosses can start a combo in one direction, and instantly attack from the opposite without any in-between animation.

Another issue is that the game is poor when it comes to hurtboxes. Plenty of times, I was hit after the attack was finished due to the hurtbox remaining on the enemy’s attack while the weapon was behind them. There were cases of being attacked before the actual weapon connected with my character’s body.

I also have to point out some annoying technical issues that happened during play. I noticed the game would sometimes hitch or stutter at the worse times. There were cases of enemies passing through energy barriers and even getting my character stuck in a wall. Bugs may not be damning in most games, but talking about one where dying has a stiff penalty presents a problem.

Death’s Gambit pushes the idea of a 2D Dark Souls-Like as far as it can go in my opinion. For someone to take things further would require enhancing the art and animation along with a deeper combat engine.

There is potential here to take the design further in the future, but Death’s Gambit comes up just short of Souls-Like success.

How to Measure a Game Mechanic or System

Discussion on Crunch in the Game Industry