Donkey Kong Country Returns was the first game starring Donkey Kong on a console in a long time. After people saying that it was too hard and a remake on the 3DS, we have the first follow up with Donkey Kong Country Tropical Freeze. And even though this was developed by Retro Studios and not by Nintendo or Rare, this classic platformer definitely hits the nostalgia notes for both design and difficulty while elevating the genre as a whole.

The story, like with all Donkey Kong games involves someone messing with DK’s bananas and island. When a snow storm brings invaders to DK’s home, it’s up to him, Diddy, Dixie and Cranky Kong to go out and save the day. The game is played primarily as Donkey Kong while the remaining Kongs can be found in barrels throughout the game and become DK’s sidekick.

While Donkey Kong has a fellow Kong along for the ride, you gain two extra points of health and the partner can perform a special agility move by pressing A in the air. Dixie can give you extra height with her hair, Diddy’s rocket jetpack gives you extra range and Cranky lets you pogo jump like Scrooge Mcduck from Ducktales.

Tropical Freeze features many returning elements from previous DK platformers: From the world map to the numerous bonus and hidden areas in each level. Each level has collectibles in the form of puzzle pieces and letters spelling out KONG with both sets hidden throughout in various spots. But don’t expect the main game to be easy like in the Mario series as Tropical Freeze features a very diverse and difficult set of levels.

The world of Tropical Freeze is a harsh one as DK only has two hits normally before he loses a life and there are a lot of bottomless pits to be aware of. The game features an item shop where you can use banana coins to purchase things like extra lives, more health and even a parrot to help you find the hidden items.

The platforming in Tropical Freeze is interesting thanks to the slower movement of Donkey Kong which adds some weight to his motions. Unlike previous DKC titles, you need to time your presses of the jump button in order to get extra height off of enemies which is used in the later levels for added challenge. An advanced move is using the roll attack to give you increased momentum to make long jumps which becomes very important for those going after the extra challenges. 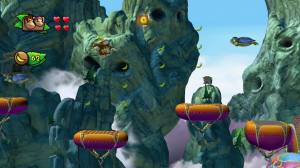 Hidden objects are always placed in hard to get to areas and challenge you to make sure of your moveset to reach them.

As I said in my best of 2014 list, Tropical Freeze features some of the best level designs I’ve seen from a platformer in recent years.

Each world has a theme to it which is then further explored in each level in different variations. While there aren’t as many levels in this compared to Mario or other platformer titles, the variety of designs present is amazing. Even the levels that involve riding a vehicle have unique obstacles to watch out for based on the world that they are in.

Expert levels are hidden and provide the game’s toughest challenges. These levels must be completed on a single run and each one takes the design to the highest difficulty. One level requires mastery of timing the jump button press mentioned early as you bounce your way across a bottomless pit while another requires you to get through an obstacle course of moving platforms. Similar to the expert levels in Mario, while you can somewhat get around the obstacles with the help of the Kong family, (or in Mario’s case, the items) they are designed around master level play and you do need to step up your game to beat them.

The bosses of the game are all about pattern recognition but as an interesting touch you can do damage to them outside of their basic pattern which gives expert players a bit of a reward for figuring it out and beating them quicker. Throw in time trial mode and there is a lot here for a platformer fan.

Despite me naming DKC Tropical Freeze my favorite game of 2014, I do have some minor issues to talk about.

Even with the additional levels and a hidden “hard mode” DKC Tropical Freeze is on the short side. I was actually expecting more post game levels similar to the older DKC games or Mario than what was present. Like previous DKC titles you can find little bonus rooms hidden in each level but there wasn’t enough variety and the rooms repeated a lot. 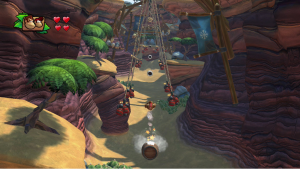 While the game is 2D, barrel cannons allow for 3D traversal of the environment.

While the controls were good for the most part, there were a few parts here and there that were a bit touchy.

Using the roll gives you increased speed and jumping distance but it also made it hard to gauge where you’ll land. Fans of other platformers may not like the fact that Donkey Kong has that little heft to his movements and it does take some getting used to.

But despite those minor complaints, Donkey Kong Country Tropical Freeze is an amazing game and one of the most refined platformers released. As I said on my best of 2014 list, this is the closest I’ve seen another game company come to matching Nintendo’s first party game designs and that is the highest compliment I can give and I hope we continue to see more from Retro Studios and the Kong family.