Doom 2016 was one of the most successful relaunches of a major franchise alongside Assassin’s Creed 2 and Resident Evil 7. Bringing the series, and FPS design, back to the basics with one of the purest examples of the genre in a long time.

And with that said, Doom Eternal is not only the bigger budget follow up, but in a way, a complete betrayal of Doom’s design. This is a game that you are either going to love or hate, and for me, I loved it.

Doom Eternal is a remake in a sense of Doom 2. The demons have taken over Earth and it is up to the Slayer (AKA Doom Guy) to wage a one-man war against hell.  The first thing you will notice is the story because the game hits you over the head with it.

In the previous game, the story served simply as a backdrop for the Doom Guy to rip and tear across Mars. Here, the developers have taken extreme lengths to build an entire narrative around the game. You are no longer just a space marine, but part of an ancient race of protectors with their own history and lore of fighting the demons. Even weapons like the super shotgun and chainsaw now have lore about why they are there. Codex entries are filled with technobabble and information that most of you will never care about.

There were more and longer cutscenes in the first mission of Doom Eternal than I think there were in the entirety of Doom 2016. Getting past the story, you will find that this is not the same Doom as the last game.

Doom 2016 was a game that pulled off a mastery of its core gameplay loop and bringing the player into a sense of flow. This was achieved by removing a lot of the “fluff” of modern shooters. With Doom Eternal, that flow state has been completely reworked along with the pacing of the game.

You are not just armed to the teeth with guns anymore, but a full armament of killing that you will need to learn. Glory kills — finishing off enemies to gain health — return, but now you have a suit-mounted flamethrower, grenade launcher, and the chainsaw has been given an upgrade.

To recover your health, ammo, and armor, you will need to make use of glory kills, chainsaw kills, and flamethrower kills, respectively. While there are still supplies on the map, there are far fewer compared to the last game. Each one of the game’s massive levels will introduce at minimum one new addition to your abilities – a new movement tech, new weapon, or some new power, that must be integrated into your routine. 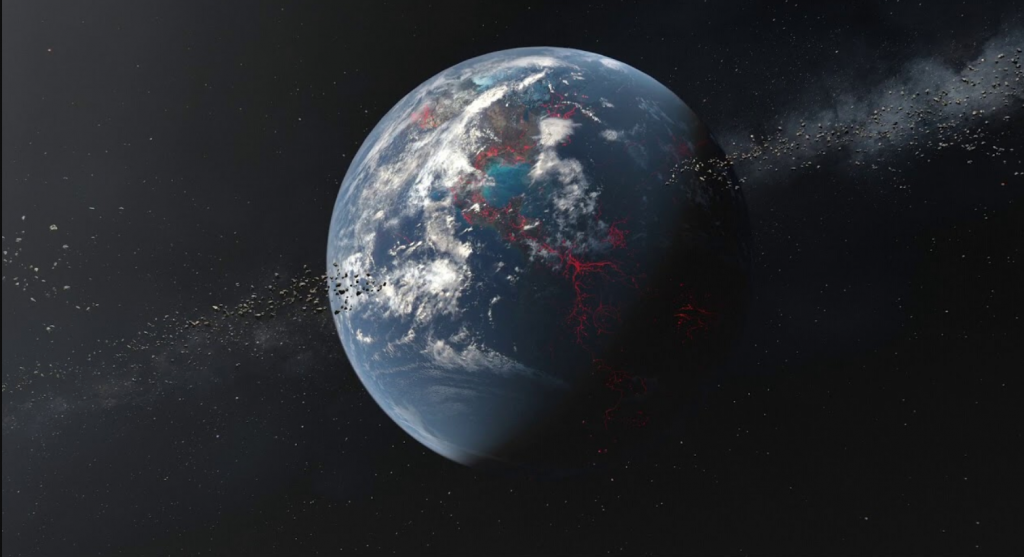 The world has turned into a hellish platformer

From a level design standpoint, Doom Eternal does feel a little bit behind Doom 2016. The level design stretches outward and pushes the player through various set pieces. Arena combat is still first and foremost, but there is a larger focus on platforming compared to the first game. At times, Doom Eternal feels more like Mario or the Prince of Persia than an FPS. Thankfully falling into pits is not an instant kill, but if you are not up on your platforming skills, these sections may be more difficult than the demons.

But when it comes time to enter the arenas and fight, Doom Eternal makes the most controversial changes.

I am going to say something now that will probably not make a lot of sense yet: Doom Eternal is more of an action game than an FPS.

Doom 2016 was praised for its return to a streamlined FPS experience and it was all about tuning out everything else and focusing on the gunplay. Every weapon did “damage” — shotguns did a lot of damage at close-range, your rifle does it at long-range. If you wanted to play through the game using one or two weapons you were free for the most part to do that.

Doom Eternal is nothing like that; playing it like Doom 2016 will end in failure every time and it has to do with the changes to enemy designs. There are essentially three kinds of enemies that you will be fighting. Fodder enemies who will always be in arenas that can be killed easily to regain supplies. Grunt enemies that are the common imps and soldiers that distract you from the real threat — the heavy demons. Demon health and overall abilities have been given a major upgrade, with the majority having a primary and secondary attack.

On the higher difficulties, the demons can rip and tear through you just as easily as you can do it to the fodder enemies. Defeating these enemies rely on exploiting new weak points. Arachnotrons can unleash an explosive barrage from their tail unless you destroy it. Cacodemons are weak to grenades which set them up for a follow-up glory kill. With the lower ammo pools, you need to be aware of major threats and have the ammo on the right gun to finish them, or quickly get away and find an enemy to chainsaw for ammo. 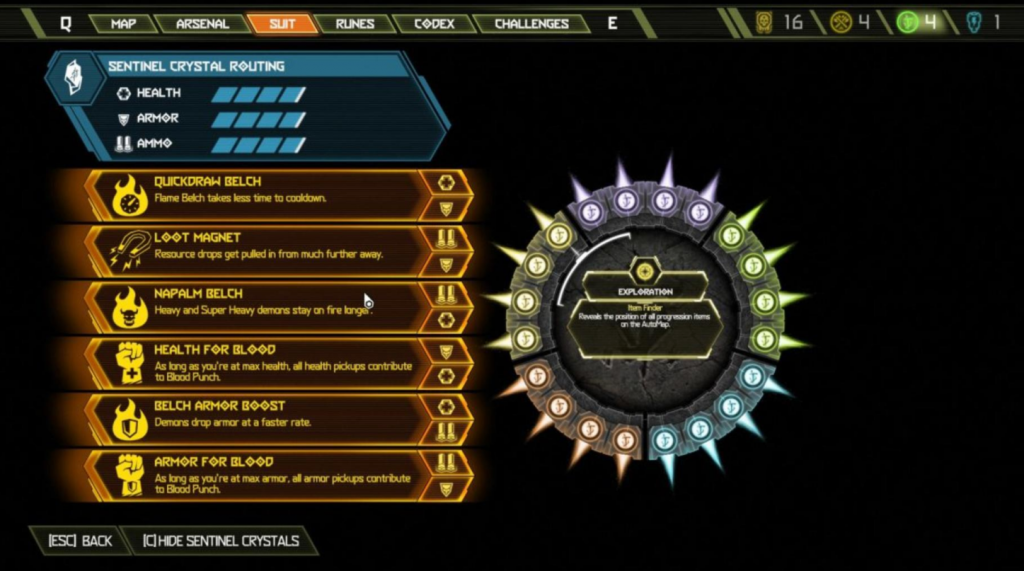 Upgrades make their return with more options for different playstyles

The inclusion of a dash cements the action game overtones in Doom Eternal. You may be fast, but the enemies and their attacks are faster. To stand any chance of winning on the higher difficulties, you’re going to need to know how to push into groups to finish off enemies for health and ammo, while doing your best to stay mobile and never get locked down.

Every fight in the game turns into a crazy free for all of dashing, chainsaws, grenades… and of course killing. If Doom 2016 gave the player the power fantasy of the Doom Guy, Doom Eternal gives it to the demons and challenges you to step up. The demons can be an absolute pain to fight if you ignore their weaknesses and the strengths of your weapon mods.

Speaking of weapons mods, the upgrades, runes, and weapon mastery challenges make their return, along with a bevy of collectibles to display in the new “Fortress of Doom” that is either the cheesiest thing you have heard today or the most awesome.

Doom Eternal’s core gameplay loop elevates the design further than Doom 2016 ever did, but it may not be what fans want.

Fighting the enemies in Doom Eternal was a challenge on nightmare, but it was not that extreme for me, and that is not meant to be bragging, but about what Doom Eternal is.

This is a game that requires you to be constantly thinking about how you are fighting. You cannot turn off your brain and enter a state of flow as easily as in Doom 2016; there is just too much going on in combat for that to work. Doom Eternal’s focus on action makes it in my opinion the most progressive FPS in terms of mechanics I have seen in some time.

You cannot play Doom Eternal your way as in other FPS titles. I know this comparison is old at this point, but this is the Dark Souls of FPS, except here, you are meant to be fighting crowds of enemies at once. Playing Dark Souls, while you are free to experiment with builds and weapons, you still must play by the rules of the enemies.

Some enemies are all about dodging around them, others are about parrying and counterattacks. The point is that you are given a collection of tools, and it is up to you to make the most out of them in a situation. One of the big points I had to adjust around was using the flame belch to get more armor which in this game is basically a second health bar for enemies to go through. Just adding that additional piece to the routine caused me trouble until I got used to it. 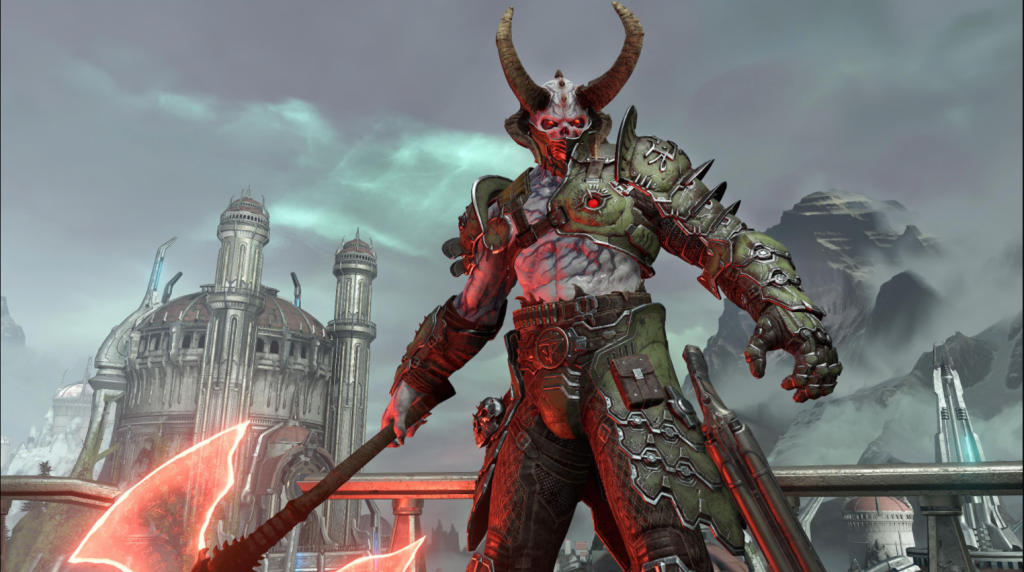 This comes to a head at the point where a lot of players threw their hands up in disgust: fighting the marauder.

Marauders are enemies who counter every attack with a shield and the only way to do damage is to stun them before they attack and then hit them with heavy attacks. Suddenly, every one of your tools outside of the specific ones that affect them is useless.

For me, that means nothing — I played Sekiro Shadows Die Twice, I know what it means to fight an enemy a specific way.

With all that said, it is time for the big question: Which Doom is Better? Doom 2016 was a game that knew what it wanted to be, it knew what it did not, and it executed that as perfectly as one could.

Doom Eternal is not as perfect. Information overload can quickly take a hold with everything that the game wants the player to process at once. I wish some of the tells around enemy spawns and item reloads were a little more pronounced. Sections that restrict the player’s movement (and those annoying tentacles) break the flow of the game. And the progression system on top of progression systems approach still feels a little weird for a Doom game while still being required at the higher settings.

However, in terms of moving the needle forward on FPS design, Doom Eternal is a masterclass in that regard. As someone who is more at home with the constant on the fly thinking in action games than prone shooting, Doom Eternal clicked for me very easily. I have talked about before on one of my dream concepts: A Dark Souls-inspired FPS, and Doom Eternal’s design feels like the perfect foundation for that.

I hope that developers took notes on Doom Eternal’s gameplay loop and feel, as it really shows that there is more possible in the FPS genre besides just throwing numbers on guns.