The Roguelike and lite genres are in full force these days, as we are seeing all kinds of games combining and retrofitting designs to give it that rogue feel. Today’s game — Dungelot Shattered Realms, manages to combine rogue-like elements with one classic game that I’m sure no one saw coming; in doing so, is a good example of a game greater than the sum of its parts.

Dungelot’s story takes place in a world where over harvesting of magic elements has caused the land to split and leaving three continents full of magic and monsters. At the start of the game, you’ll play as a paladin, with additional characters unlocked as time goes on.

What makes Dungelot different from other rogue-likes on the market is how the developers have adopted minesweeper as a source of inspiration and underlining foundation of the game.

How it works is that each dungeon is broken down by floors, with the player’s task is to find the key to the stairwell up. Each floor is made up of a grid of blocks that the player must decide which ones to break and in what order. You can only break blocks adjacent to your starting position or next to blocks that have already been broken.

As you break the blocks, you’ll find items, food, gold and of course monsters to deal with. The monsters in Dungelot run the fantasy gambit and each one has their own strengths, weaknesses and quirks. More importantly, when a monster is revealed, they will have a zone of control around them, preventing you from revealing blocks within that field until they are killed. 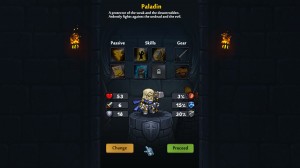 You’ll need to manage your health, armor and food for each dungeon. Health is self explanatory, armor mitigates damage and food is used when entering each new floor or you will suffer damage.

Combat is straightforward: Click on an enemy to attack or use one of your character-specific spells on them. There are weapons and gear that you can find to give you special effects during combat, but they are not in the player’s control and are up to chance.

Tying everything together is a simple meta-game layer that works to keep the player motivated to continue.

While any items you find in the dungeons leave you at the end of the run, there are persistent elements in Dungelot. Gold can be used to buy new weapons and armor from the blacksmith; allowing you to customize your starting load-out before going into a new dungeon.

Early on, you’ll unlock a mansion that provides a wealth of meta-game upgrades at the cost of gold. These upgrades unlock for every character and can help with tipping the scales in your favor.

Every dungeon has some reward for you and helps to keep you motivated to play them all, and with each character providing their own twists gives the game some replayability. The developers did everything they can to stretch the mechanics as far as they can go, but there is a limit in terms of complexity and depth when you’re dealing with simple mechanics.

Dungelot definitely lands on the simplistic side of the Rogue-light line, and no matter what the developers tried to do the game just doesn’t have the legs compared to more challenging roguelikes. As with any rogue-like or light with procedurally generated levels, part of the difficulty is simply based on the level design you get. Getting 20 floors into a dungeon to only be hit with a string of bad luck costing you the dungeon is possible; so is starting off and getting nearly killed in the first 5 floors.

This is very much a game of, “What you see is what you get.” Nothing really changes in terms of design as you keep playing. New enemies and traps are introduced, but the same base gameplay will take you through beginning to end. 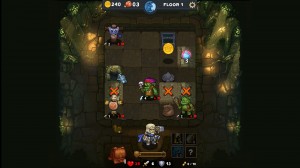 Floor layouts are procedurally generated; leading to wildly different difficulty for each play

The game was definitely designed for a mobile device first and could have used some keyboard shortcuts or commands to help cut down on constant clicking and switching to the inventory screen.

While the game does allow you to level your character, it seems like a false choice, because increasing attack damage is always the best option.

Overall, Dungelot Shattered Lands isn’t going to take the rogue-like or light market by storm, but it’s a great casual game for newcomers or someone looking for a roguelike without the brutal difficulty of some of its peers. For more on Dungelot, you can watch the spotlight I did on it.

A Campfire Discussion on the Flame in the Flood