There’s that popular adage: “be careful what you wish for, or you just might get it.” As someone who loves dungeon crawlers and party-based RPGs, I’m always looking for the next one to play. What we have with Dungeon Encounters is a game that seems like it was designed solely for someone like me, but am I really getting my perfect game?

If you’re someone who loves games about deep storylines, beautiful graphics, and tons of ways of playing, then Dungeon Encounters is not for you. The story is told with a one-paragraph summary at the start and then is barely referenced again. All you need to know is that there is a dungeon full of monsters and loot, you have a party of adventurers…and scene.

The only graphics the game has are the characters running around the dungeon, character portraits for your party and enemies and that’s it. The “dungeon” is literally a set of tiles that would look at home on graph paper with numbers denoting events and enemy attacks.

This is as pure of a game about numbers as one can get. Every character in your party starts at relatively the exact same stats and abilities as everyone else. Gear is your one and only way of enhancing the capabilities of your party. Every character in the game has a physical defense, magical defense, and HP stat. Different weapons and spells will target different defenses, and you cannot hurt an enemy’s health with a type of damage until you remove their respective defense. Because of this, gear is a huge deal, as every increase in your damage means being able to remove an enemy’s defense in fewer turns. There are multiple shops to buy gear from, and enemies can sometimes drop items after defeating them. What’s interesting about the game is that weapons can either do fixed damage or randomized damage based on the gear itself.

Where experience and leveling come in is that every piece of gear has a PP cost that is dependent on the character’s level. The stronger the gear, the higher cost it is to equip. One thing that Dungeon Encounters does very well is make the hunt for loot meaningful. Every type of gear has different rankings of it that go up in terms of its PP cost and the impact it has. When an encounter ends with you finding a new weapon or armor piece, that is a huge deal because it will often mean a huge bump stat-wise for one of your party members. You can also unlock gear to show up in the stores by defeating enemies.

There is this sense while playing the game that despite the RPG trappings you’re not really playing an RPG, but more like a giant puzzle with numbers, and that goes with the dungeon design itself.

Every floor of the game is 100% handmade and linear; the only X factor is that enemy encounters are randomly placed whenever you enter a floor. All the points of interest, puzzles, loot drops, and abilities you can unlock, have been hand-placed. Abilities will either provide your party with a benefit, let you manipulate field exploration, or can be used during combat for an edge. In terms of interaction, the abilities are the most hands-on you’re going to get outside of combat orders. 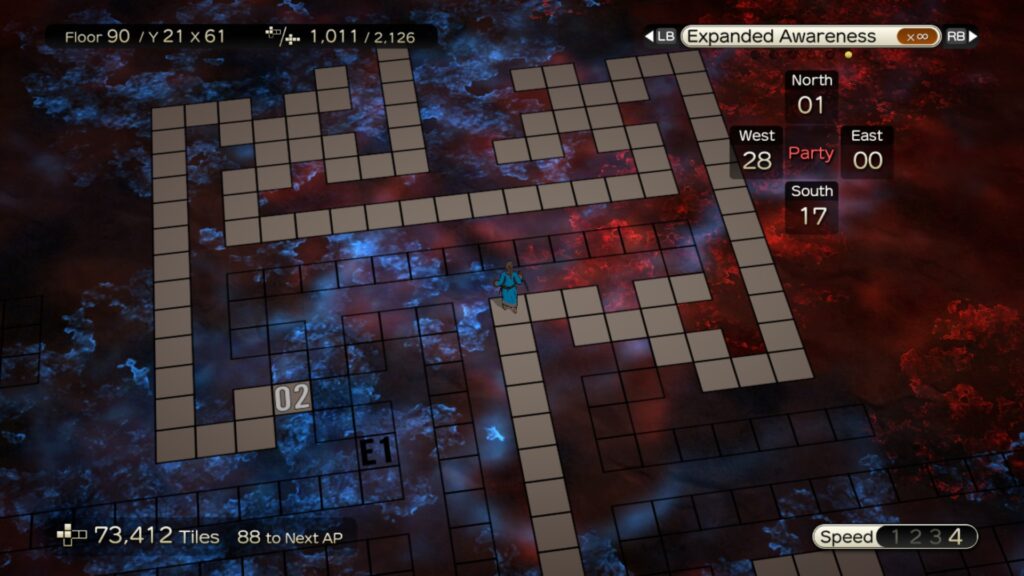 while backgrounds change, the tiles remain the same

Because everything is fixed, it means that there is this alternate play of solving the puzzles and clearing every floor 100%.

Not only does this give you more ability points to play around with, but this is how you get information on the enemies that can show up, find useful resources, and solve the as-for-mentioned puzzles. As an example, poison is a very dangerous ailment in this game that just eats through health ignoring defense. Getting poisoned is bad as there are only a few ways to cure it outside of reviving dead characters. One of the early “puzzles” in the game has a reward that grants your party poison immunity for as long as the ability is equipped, and there are corresponding abilities for all the major aliments.

If you try to rush through and do not get the abilities available, it becomes increasingly likely that one enemy’s special attack will one shot your entire party. There are hidden characters along with character-specific gear you can find, but I can absolutely assure you that the main challenge of the game is not built on the exclusive gear. There are ways of breaking the game with the right gear and abilities, but it’s up to you to figure it out.

Dungeon Encounters is one of those games that I wouldn’t say is “good” in the sense that it’s welcoming to everyone. I put the appeal of it along the same lines as playing idle games: a game that is just all about mechanics with nothing else to get in the way of those systems.

Nothing about this game feels like it was put in as an afterthought or the developer not understanding the design. This is not meant to be a game you play forever, but the perfect encapsulation of dungeon crawler gameplay. The difficulty can be intense for people not familiar with dungeon crawlers — good luck on your first corpse run. This is one of those games where within minutes, or even seconds of loading it up, you’ll know if you’re the right audience for it. 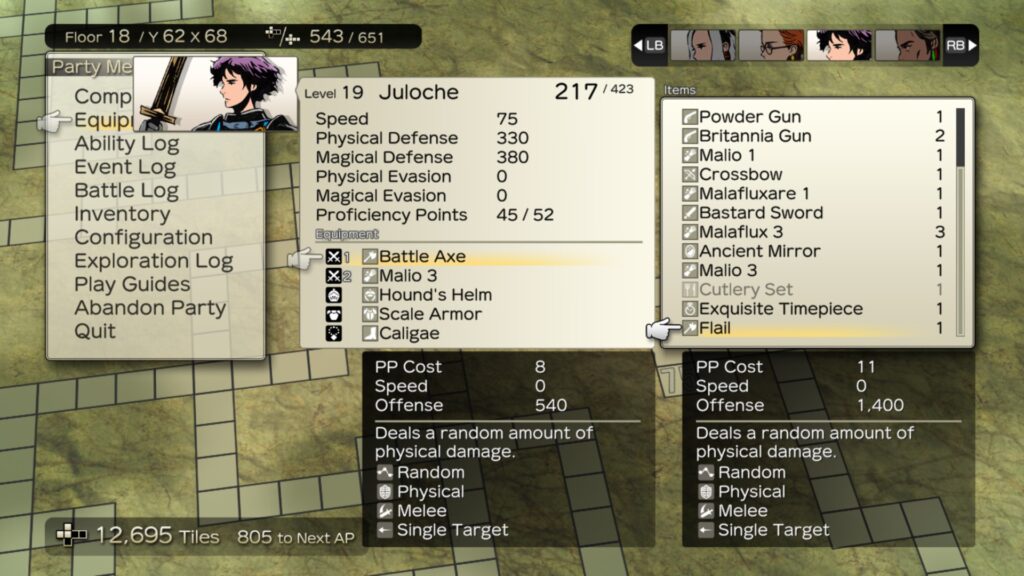 the power curve of new gear scales well with the progression

The problem with such a minimalistic experience is that even for someone like me, I started to feel the loop was getting stale without new elements thrown in, much like again, in an idle game. Eventually, the game becomes a battle of numbers over tactics. If you stay in control and explore for the abilities you need, you’ll be fine. Make one mistake, take on one encounter outside of your depth, and your entire run could be put into jeopardy. There is something very cathartic about the progression curve of this game: going from fighting enemies and doing damage in the teens, to eventually tens of thousands of points between you and the enemy groups.