Duskers is finally out and represents Misfits Attic’s first game through the Early Access Process. After speaking to Tim several times and looking at early builds, we can finally talk about Duskers. While not much has changed with the basic concept, Duskers is one of those games where a little goes a long way towards making something amazing.

The story of Duskers is that you awaken aboard a spaceship sometime in the far future after humanity has gone out and colonized. Unfortunately, it seems that a lot of bad things have happened and everyone is gone; to make matters worse, your ship is low on fuel and your only way to explore is to use drones.

The entire game uses a dirty-tech aesthetic, where it’s all retro tech used in the future. The minimal aesthetic also extends to controlling the drones. While you can control movement via the keyboard, the majority of your interactions will be via a command prompt straight out of the DOS era. Commands can be typed, combined, and even created with an alias system to allow you as much control over your drones as you need.

Modules can be found that provide additional functionality to the drones that you install them on; from stealth, gun turrets, prying doors open and more, can be found to assist you. 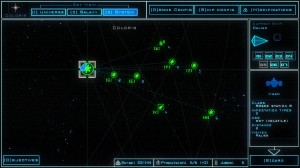 While there isn’t a huge narrative, you’ll find story missions that help to flesh out what happened to the Universe and humanity while you were away.

Standing in your way are both literal threats in the form of whatever life is left in the Universe, and the resources you need to keep going, and this is where the rogue-like elements of Duskers come in.

A major theme of Duskers is the fact that you are always strapped for resources and things are breaking down around you. Drones will eventually suffer malfunctions, along with the modules that can be attached to them. As things begin to break down from use, you’ll need to decide if you want to spend scrap fixing things up, or holding on and rolling the die, because once a module breaks, it cannot be fixed.

Besides scrap costs, you need manage your fuel supply within sectors and galaxies. You have a limited amount of fuel within a sector to fly around to the ships and outposts that you want to explore, and then jump fuel for moving between systems in a galaxy.

As you move further and further away from the starting galaxy, the ships become more dangerous and your ever decreasing amount of supplies will begin to takes its toll. When you’re ready to restart, all story missions and their progress will remain the same, so you’re not losing anything other than the previous ship’s resources. 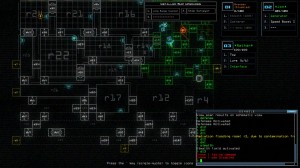 The enemy design in Duskers is also minimalistic, but it works like everything else. The four (at the moment) types of enemies each respond in their own way and have certain strengths and weaknesses around the modules in the game.

Since your supply of modules is always changing, the threat level is always shifting as you move from ship to ship.

Duskers reminds me a lot of Renowned Explorers and how it’s a perfect example of aesthetics and design coming together to create one unique experience. From that foundation point of view, Duskers is amazing, but I do have a few problems with the game when it comes to replayability.

Duskers’ moment to moment gameplay is one of the best of 2016 thanks to how well the aesthetics and gameplay work together. Unfortunately, the game’s meta-design is lacking at the moment, and giving the player a reason to keep playing. In fact, the long-term play of Duskers was a problem that I feared during the early access period.

There just isn’t any real growth to the gameplay; granted, things get harder, but nothing really changes. Not counting the enemies, your fifth ship explored will be the same as your 500th. There are a lot of random events that can happen, but they’re not enough to shake up the game once you get your feet wet.

The story logs are interesting, but they have no real relation on the gameplay; nothing gets unlocked, no new content appears, it’s simply an item to check off of your list. It’s a missed opportunity (or hopefully an expansion at some point) to unlock new types of ships or situations based on the stories the player goes after.

Compounding the mid to late game is the obvious fact that your survival is kind of out of your hands. Since modules have a random chance to break as they get used, sometimes you’ll have something last into the 40% range, other times, they’ll break at 20%. Once you lost all your defense type modules or those for detecting enemies, you might as well just restart due to how limited your options are. 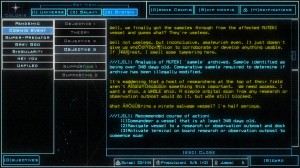 The story logs are interesting, but don’t have any relation to the gameplay

I think you can guess what my big problem with Duskers is: I want more things to do and to find. Whether that be different enemies, more situations and modules and ships, I just want more.

One last thing to point out, Duskers is a very polarizing game due to its aesthetics and gameplay. This is definitely one of those games where you’ll either love it or hate it for its quirks.

When the worst thing I can say about a game is that I want more, that is not a bad problem to have. If you’re looking for something different from the rogue-like genre, Duskers can fit the bill. And if you warm up to the game’s design, you can spend hours drifting about the Universe.

For more on Duskers, you can watch my playlist of attempts at getting through the game while not having drones get sucked into the vacuum of space.

If you enjoyed the post, please consider donating to the Game-Wisdom Patreon campaign. Your donations will help keep the site going and can bring back the developer live plays.

3 Reasons Why Mobile is not the Future of Game Development

The 2 Sides of a Successful Indie Developer