Faith The Unholy Trinity Proves the Mortis is in the Details

Faith: The Unholy Trinity has been a long time coming for horror fans. Originally released as a single chapter, this retro-retro horror game has since been fully expanded into three chapters of pixelated terror. A perfect game for the horror season, but there were some details that weren’t as scary as they were frustrating.

Faith is designed as a pixelated horror game inspired by the satanic panic of the 80’s. We play as John, a priest who gets called to perform an exorcism on a girl named Amy. When things go horribly wrong, it sets John down the path to confront demons, cults, and some of the most disturbing sights you will see from an 8-bit game. The text-to-speech program is used to great effect to deliver some chilling lines, and there is some brilliant uses of rotoscoping for the cutscenes. 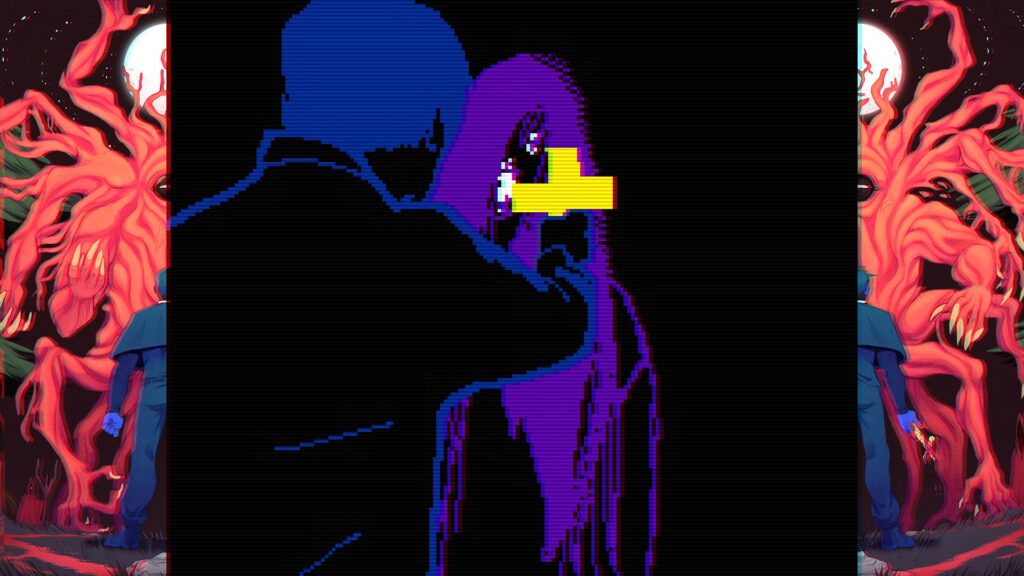 This game certainly goes places with its use of cutscenes

Each chapter is self-contained but continues the overall story from parts 1 to 3.

You can see the evolution of the design across the games, with the puzzles and situations becoming more advanced. Your only actions are to move and use your cross to attempt to exorcise any demons you may run across.

While things may seem simple, each chapter has multiple endings to uncover and a variety of spooky situations. With that said, I have some problems not so much with the gameplay, but with the overall package.

Faith: The Unholy Trinity is a solid horror game and one you should go into completely blind. However, on repeated plays, the game’s issues become a bit more apparent. There is no way at this moment to fast-forward through cutscenes. While the text-to-voice’s creepy pronunciation of words is haunting the first time, it can become agonizing to wait through it on repeated plays. Speaking of waiting, I would like a way to move just a little bit faster, not only for general movement but for something I’ll come back to in a second. The game does promise there is a “turbo mode” which I’m not sure if it needs to be unlocked or patched in later.

A major aspect of the game is going for the multiple endings, but this can become frustrating on repeated plays for several reasons. Besides the slow movement and having to sit through cutscenes, there is no way to start at specific areas in a chapter or see what’s missing in a section. For your first time, this information isn’t needed, but for people wanting to see everything all three chapters have, it can be annoying.

As you move through the chapters, both the difficulty and complexity of the puzzles grow. Some of the advanced puzzles in chapters 2 and 3 could have used a bit more in terms of guidance for the player as to what they need to do. Getting all the endings will require you to complete specific tasks, and there were a few that I couldn’t find the right solution to.

In all three chapters, your actions and abilities remain the same, but enemies become faster and more numerous. There are several areas where not being able to move fast or quickly attack will come back to bite you in terms of difficulty spikes. I also wish that there were more checkpoints during sections that require you to complete multiple tasks in a single go. With only one hit before you die, there can be a lot of time lost repeating what you did.

Faith: The Unholy Trinity is a solid horror game that proves aesthetics and mood will always win out in the scares than just graphical horsepower. If you’re looking for some low-bit horror with a lot of disturbing charm to it, then this is the perfect game for your Halloween scares.