The fact that Ghost Control Inc has been out for a few months now and none of my friends told me about it is making me question my relationship to them. As a lover of just about all things Ghostbusters, someone attempting to strike modern day gold with a design last seen during the Atari era caught my eye. While Ghost Control Inc has no direct relationship to the Ghostbusters IP, we do have the foundation for an amazing game.

This one featured more of a business management type design as you had to run the company while busting ghosts. This type of multi system design could also be seen in the classic game X-Com UFO Defense. And it is this model that Ghost Control Inc is based on. After an incident has caused ghosts to appear in London, it’s up to Ghost Control Inc to keep the city safe.

While yes you are running a business that involves capturing and containing ghosts, there is no mention at all of the Ghostbusters IP. After choosing your first employee and selecting a difficulty level, you’ll be inside your headquarters waiting for a call.

You can hire additional employees that come with a class specification and stats. The class determines boosted stats to specific attributes which becomes important when you start unlocking better gear that has stat requirements. When you have a job or want to go around London, you can get in your car and head to the city map. 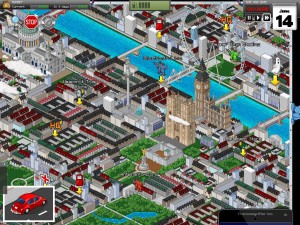 The map features static stores while ghost locations are randomized.

The map is where you’ll see competing ghost capturing companies as well as stores to buy new gear, gas stations to refill and more.

When a job comes in, its position will be marked on the map and you’ll have to get there before another group does or they will take the job from you.

Once you’re at a job, the game shifts to an isometric view which should be familiar to anyone who played the original X-Com. The rules for catching ghosts are pretty simple. Every member on your team has 2 action points per turn, action points will let you move, shoot, place and pickup traps etc. Ghosts come in different types along with the chance of finding a rare ghost that may have a unique perk.

To catch a ghost you need to hit it with your main weapon to reduce its energy before placing a trap. The different types of traps have stats related to how many ghosts it can hold, the ghost’s max remaining energy before it can try to capture and the chance at capturing a ghost. If a ghost is on a trap when the turn is over, the trap will try to catch the ghost which is the only way to get rid of them. You can force a capture attempt during a turn by attacking a ghost while they are on the trap.

Your mission is to capture all ghosts on the map before they cause enough damage to the property. Once you captured all the ghosts, you’ll be paid minus any damage that they (or you) managed to do.

As the game goes on, you’ll be able to use ectoplasm from captured ghosts to improve gear, buy new equipment including vehicles to let you transport more people to the scene while fighting new and more dangerous ghosts.

The basic setup of managing the business, improving your gear and outfit and capturing the ghosts has that great feel to it like in the original X-Com. And the foundation of meta-game design of combining these systems is still excellent. However the main problem with Ghost Control Inc is that these ghosts don’t have much meat to them.

The management side is very basic with no way to personalize bases outside of predefined upgrades. The limitations of gas quickly become annoying unless you continually stop at gas stations after every map.

For all the gear in the game, you’ll find a lot of them are false choices due to the limited ghost catching gameplay. Gear that does a lot of damage is king as the quicker you weaken a ghost, the quicker you can get them off the field by capturing. This limits the utility of a lot of the gear that may have some unique perk but does far less damage. 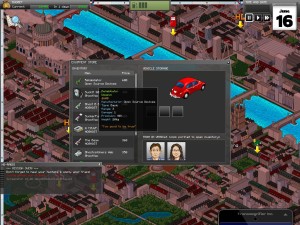 Despite the variety of equipment, the lack of tactics to fighting ghosts renders a lot of the equipment less optimal.

For example gear that can push or pull ghosts away from you sound great in theory. However the ghost’s movement radius is so big that they will always be able to close the gap no matter how far you push them away.

Ghosts have very basic AIs and floated around at random sometimes without any sense of greater strategy. This also makes it very easy to focus a ghost down and trap them.

Another problem is that almost every ghost in the game attacks with ranged attacks with the player given no idea the range. Fighting a ghost called the lich, he was wiping out my entire party while being pinned to a wall, on the other side of the room while being stunned and there was nothing I could have done to mitigate that.

The game also features some clumsy UI design that while not a huge deal does become annoying. For instance, all the information in the game is displayed on window panels, but you can’t view a new window unless you remember to close the old one first. There are no in game tips to let you know what the various stats do or even the classes.

During the ghost fighting parts, the UI feels more cumbersome than what it should be given the basic control system. You’ll have to make use of the number keys to select commands where I think a context sensitive system would have been more intuitive. To make matters worse, you can’t move your team across the same tile that another member is standing in. This can lead to spending several turns trying to situate everyone to move without someone getting stuck.

Speaking of combat, the game could really use more on screen information such as viewing attack ranges, capture and damage blast radius for advance weapons, movement range of ghosts and so on. To the developer’s credit, they have already released a small patch on Steam to fix some of my other UI complaints and they may very well fix these at some point in the future. 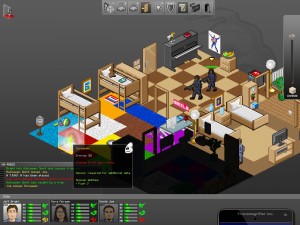 A lot of important information is not shown during combat and the controls could use some work.

Another major area and one that is the most damning I feel is the progression model. Unlike say X-Com where the game continually grows and moves you along with new enemies, tech and challenges, Ghost Control features a very linear campaign built around random maps.

The progression is broken up into stages which lock gear, new ghosts and challenges from the player. You need to complete different milestones to move the game forward.

This leads to uneven progression as you’ll complete some goals very easily while others based around having X money will cause you to grind out on simple maps until you have enough. What’s worse is that I noticed that gear that could be equipped on the head disappeared without any new gear to replace it.

Despite these problems, Ghost Control Inc does manage to capture the feel of the classic Ghostbusters game and it’s one of those games where I would buy a fully fleshed out sequel in a heartbeat. While it may be a bit simple at the moment, there is a lot here that can be built upon to make an even better sequel or expansion.