Suda 51 has had a real reverse winning streak when it comes to his titles. After creating the niche hit of Killer 7 and the somewhat well received No More Heroes, he has not had much luck with games like Lollipop Chainsaw, Shadows of the Damned and even the second No More Heroes.

The problem that stems from his titles are all about style over substance and sadly Killer is Dead falls into the same trap.

You play as Mondo: a ladies’ man who is a master swordsman with a giant robotic arm. As with previous Suda 51 titles, the world and overall story are left largely as a mystery.

Mondo works for an agency that specializes in killing killers AKA as the title suggests. Despite having the word “Killer” in the title Killer is Dead has no direct relationship to Killer 7 other than that amazing cel-shaded art style that is in all of his games.

Story wise, expect a lot of crazy plot points, insane characters and a story that probably won’t make much sense even after the game is done. Each mission is setup as a hit as Mondo must brave the killer’s base of operations, kill any minions and finally fight the boss.

Combat relies on mainly smashing the X button to cut through enemies with sometimes pressing Y to guard break. Mondo’s arm collects blood which can be used to power up a one hit kill attack as well as special weapons that you can collect through the game, but more on that later. 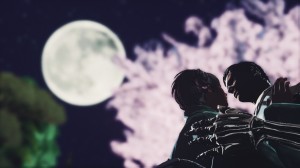 Cutscenes exude style with amazing graphics. I just wish the gameplay was as pleasing.

You can try to block or dodge attacks with you gaining an advantage if you can time it perfectly. Meanwhile, you’ll collect moon shards that represent upgrade currency that can be used to enhance Mondo’s abilities.

But for those wondering if things were a little too normal for a Suda 51 game, ladies and gentlemen it’s time to talk about Gigolo Mode

To collect the as mentioned special weapons, Mondo has to seduce women around the world to have them sleep with him and give him a new weapon… no I’m not kidding.

How it works is that you have to stare at certain parts of their body when they’re not looking to raise your guts meter high enough to give them a gift. Giving them the right gift will raise a hearts bar, when it fills all the way up, the woman is in love with you. Get caught staring and you’ll lost guts.

At any time you can put on Mondo’s Gigolo glasses for X-Ray vision and to raise the guts meter quicker while finding out what gifts they want. And yes, everything that I just described is a real game mechanic. The only thing keeping this from making it on the news was that there are no sex scenes that follow winning one of the women’s hearts.

This is definitely an odd system to have in a video game and according to an interview, Suda 51 wasn’t completely involved with this game compared to his other titles and this was put in as a way of having some mini game. But while it didn’t bother me, it definitely ranks high on the “offensive to women” scale and seems like something thrown in for just titillation. 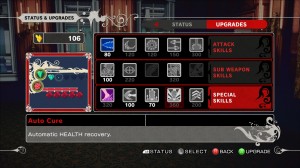 The upgrade system was basic which didn’t help the already simple combat.

Making it even harder to defend was that really, there was just no gameplay to this other than making me stare at barely defined women for several minutes and because the special weapons are tied to this mechanic, you really can’t afford to avoid this mode.

And this is where we come to the problems with Killer is Dead: As the trend of style over substance continues.

Killer is Dead is very repetitive in its combat system. Don’t expect to find the variety of combos like in DMC or even an attempt at adding complexity like Abyss Odyssey.

I noticed some major delays in button commands and finishing attacks making combat very loose. The camera as another unfortunate Suda 51 tradition does a horrible job of tracking enemies. The problem is that it stays too close to Mondo when he starts attacking, making it easy for enemies to attack from off screen.

Your dodge maneuver also doesn’t feel right as it doesn’t get you far enough away from enemies to avoid their hits unless you spend points to upgrade it. And there were times where enemies seemed to hit me with no discernible way to avoid it. At one point during a boss fight, he immediately connected with a combo after being hit my uninterruptable attack and knocked out almost half my health.

Combine that with button commands appearing to not register and things can get frustrating. The difficulty curve of the game feeling very brutal, playing on hard mode, enemies were draining my health in only a few hits and there were still two higher difficulties I could play on.

Adding to the woes, the main way to find moon shards to upgrade Mondo is to finish off enemies during long combo chains. But starting out it’s hard to actually get the hits in without losing the combo. Leaving us with a catch 22 of needing items to upgrade to get combos, but the main way to get the combo up is to upgrade. 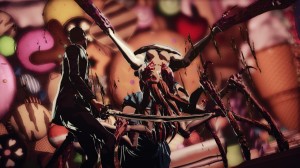 Bosses look impressive but fall back on very basic patterns of fighting.

The whole thing just felt very sloppy and the boss fights were very annoying and repetitive unlike the variety seen in No More Heroes.

I also have to point out that playing on the PC version, there was noticeable slow down whenever the game had to save a checkpoint which left me defenseless as the game stuttered along and people reporting problems with one level not loading.

Again I come to my major complaint about Suda 51 — he creates these amazing stylized worlds that I would love to explore and characters to learn about, but the gameplay never reaches the same heights. Each one of his games has interesting characters and insane storylines, but I’m just repeating the same uninteresting gameplay each level until I either beat the game or get bored.

Killer 7’s minimalist style got a free pass on this as the game was not designed around action. But when you’re building an action game like No More Heroes or Killer is Dead, if the gameplay doesn’t work, there is nothing to hold the experience together.

I do wonder if his MO of storytelling and style would be better suited to the PC and focusing on narrative titles instead of making games akin to putting a square peg in a round hole. I mean if he ever goes on kickstarter with the idea of doing a Killer 7-2, I would be throwing money at the screen so fast. But for Killer is Dead, it’s a beautiful looking game with not much else going for it.

The Debate of Platform Exclusivity in the Game Industry