Between Two Point Hospital and Little Big Workshop, we seem to be having a mini-revival of the Bullfrog sim-style of games. Trying to balance the light-hearted gameplay with depth has always been a struggle with this kind of design. With Little Big Workshop, the developers have a fantastic foundation, but leave us without much else.

Whistle While You Work

There is no story to Little Big Workshop, your mission is to take a small factory and turn it into the best around using an inexhaustible supply of gnome workers. Unlike other games that fall in the Bullfrog sim sub-genre, there are no scenarios or campaign mode in LBW. Instead, the game leaves it up to you to sink or swim any way you see fit.

The best part of the game is how the developers avoid the classic trap of a limited progression. Many titles tend to have such a basic startup that every play is just spending the first 30 minutes doing the same thing (and Two Point Hospital was guilty of this as well.)

All products that you can build in the game stem from three materials: wood, plastic, and metal. You are free to decide where to focus on, and the game features a loosely randomized market that dictates what items are needed and their price.

Designing your factory is as easy as placing down equipment, but figuring out how to run it is a different story.

Whittling Away the Hours

Manufacturing goods begins and ends with the blueprint. When you’ve chosen your product, you’ll be taken a blueprint screen where you’ll decide what materials and processes you’ll use to create it. All products have a quality standard that you must meet in order to sell it. After that, you must decide what machines in your factory will be used.

Machines are split into generalized and specialized varieties. Generalized machines cost less to buy and do a lot, but they’re four times slower than the specialized counterpart. After you’ve set everything up, your workers will begin the task of constructing the goods and divvying up the tasks. 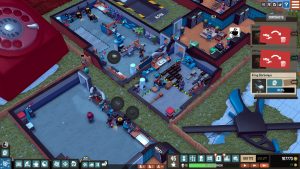 space and workflow are important to manage

Mini events can pop up that act as minigames, and you’ll receive challenges that task you with completing a good in a specific time for more money. Progression is tied to milestones that unlock up to four tiers of upgrades.

As you play through, you’ll be able to specialize your workforce, get more powerful machines and options, and become rich.

Unfortunately, while the game has mass production down, it stumbles when it comes to the details of its gameplay loop.

Gremlins in the Machines

LBW has many minor issues with its UI. While the game makes it easy to set up mass production, the UI stumbles when it comes to having to make small adjustments or fix issues. The game doesn’t make it easy to find any stumbling points in your setup. A common issue is having a bottleneck with a specific machine or task that slows everything down.

The game’s tutorial is adequate enough, but doesn’t quite teach you what to do when there are problems. Further complicating matters is that it’s a pain to try and set up basic logistics in your factory or change things.

Let’s say you want to add a new machine while production is going on. You’ll need to find a billboard (billboards let you split up tasks evenly) link the new machine to it, and then make sure that the tasks are being evenly split. Zones are used to setup where good and items are stored, and you have to once again link machines to the zone or billboards to it. I ran into issues when it came to properly setting up the logistics of moving parts around, as my haulers weren’t doing their jobs.

To make things worse, billboards can only be set up around duplicates of the same machine. So if you want to have all your woodworking machines organized, you’ll need billboards for each equipment type. 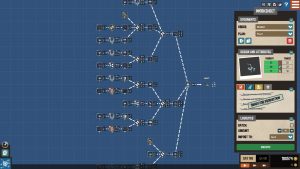 blueprint management gets a bit cumbersome as you progress

A lot of the design of the game is built on a “fire and forget” strategy — that once you’ve set up production, you should never have to adjust things. However, that leads to a very weird mistake the designers made. Once a production has been started, there is no way to either easily change the machines used or reduce the number of goods being made. If you begin a massive order and then discover that someone has already built 10 of the market requests, there’s no way to alter the order without canceling the whole thing

In turn, this makes it worthless to do any mass production order, as the time spent can easily eat through all your cash reserves with no guarantee that those goods will be sellable.

I also want to point out that the game doesn’t do a good job of explaining the break/recovery system. All of a sudden my workers started to collapse from exhaustion when minutes ago everything was fine. Like-wise there are mover gnomes that you can hire, and despite having three buildings of production going on, I could not tell how many of them I really needed at one time.

The final problem with the game is perhaps the most disappointing and is one indictive of any Bullfrog sim game.

A key limitation found in any Bullfrog-styled game has always been a lack of depth. Once the player knows what to do, the core gameplay loop quickly becomes a repetitive set of tasks. This is one of the reasons why many indie games that have been inspired by these games have focused on emergent game design and behavior– allowing the player to craft their own ways of completing the game’s challenges.

The best examples of this kind of design would be Factorio and Kerbal Space Program. Both games give the player a set of items to use, and then gives them full creative reign to figure out ways of using them. A lesser, but still good example, would be Big Pharma, that rewarded players who could set up elaborate assembly lines.

LBW has a great foundation and aesthetic but is far too limited in terms of depth to keep your attention for the hours that it demands. There is no emergent behavior or greater depth to the game. Two Point also saw this problem, and the developers came up with a challenge mode that unlocks more features as a way of getting around the simplified loop.

By the time I finished the game, I was basically going through the motions and didn’t need to do anything else but handle a few minigame challenges.

It feels like the game is missing one more loop to put it over the top — either giving the player a greater sense of control at the factory level or more persistence at the global/market one.

For Sale By Owner

Little Big Workshop is a complete surprise out of left field for me, and the developers deserve praise for delivering on something so unique. If they can grow this design, there is potential to have an elevated take on the Bullfrog sim gameplay.

If you’re looking to get your logistics on, and don’t mind the simplified gameplay, then give this a game shot.

For more talks about game design, be sure to check out my discord channel now open to everyone.

The Design of Alwa’s Legacy